I have no need of the power to propose a motion senator - that's what you are for. The soldier has a post, the sword has a scabbard, the pot has a fire. Everything has a purpose. Raising this motion is now yours. 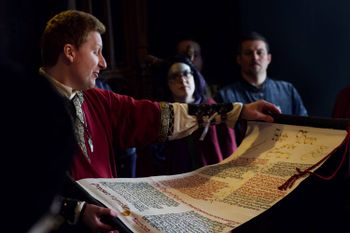 The implications of any Senate motion are constrained by the precise wording.

Motions are the primary way that the Imperial Senate carries out its business. Commissions are ordered, laws implemented, citizens appointed - all using motions. All the main powers of the Imperial Senate rely on a motion being raised and passed when directly employed by the Senate.

The only alternative to a motion is if the Senate create an Imperial title which has the legal authority to use one or more Senate powers. These powers can then be executed using a Senate announcement rather than a motion.

A motion must have a second. Any citizen with the right to propose a motion may also second a single motion each summit.

Motions can be presented to the Speaker at any time, but the civil service usually reject a motion brought to them less than two hours before a session is due to begin, unless there is a very good reason for it.

The legal implications of any Senate motion are constrained by the precise motion wording. The Speaker for the Senate will read out the wording of a motion, before it is discussed, so it is vital to keep the wording concise and avoid circumlocution. Unnecessarily long motions try the patience of the Senate and everyone present when they are read out.

Once a motion has been read out, a short time is set aside by the Speaker to ask questions and debate the motion. The claims made while speaking on the floor of the Senate do not carry any legal weight; it is left to the Imperial Synod to ensure that citizens who they feel have mislead the Senate are suitably dealt with.

A motion must contain a single clear issue that senators can vote on. The civil service will not normally allow a motion that incorporates multiple separate issues. The defining test for this is whether a senator might wish to vote in favour of one part of a motion and against another part. It is common for the Senate to debate a set of motions with similar themes; in these situations the motions are often discussed together as a set and then voted on in rapid succession.

The Constitutional Court is the highest authority on the principles and application of the constitution. Historically, the Court has always acted to ensure that the rights and powers of the other bodies of state such as the Bourse, Military Council or Conclave and the nations and citizens of the Empire receive the protection they are guaranteed by the Constitution.

Motions are decided by vote of the Senators and the Conscience of the Senate. Votes are usually open. In open votes, the Speaker will invite all in favour of the motion to move to the Throne's left or right; "Ayes" to the right and "Noes" to the left. The functionaries of the Senate will then count the votes and the result is announced. If no-one present disputes the count, then it is recorded and the matter is complete.

Any senator may call for a secret ballot by informing the Speaker of their intention to do so before the start of the Senate session. To permit a secret ballot on a motion first requires the majority vote of all present. If that vote passes then one white and one black bead are distributed to everyone who can vote and they vote by placing a single bead into bags carried by the Senate functionaries.

If a citizen is not present during the session then they forfeit their right to vote, unless they have appointed a proxy who is present to vote in their stead. It is not possible to cast a vote in advance, the citizen with the power to vote must be present to do so. It is not unknown for senators on their deathbed to be brought to the floor of the chamber to cast a vote.

A normal motion requires a majority vote. For a majority vote to pass requires only that the majority of those present vote in favour. This means that the votes of those who are absent are ignored. Most, but not all, members of the Senate have the right to vote on each ordinary motion that is brought before the Senate. Currently, the Imperial titles which the power to vote on an ordinary motion are:

The General Assembly of the Imperial Synod may veto a single majority vote once per Imperial summit. If any motion is vetoed by the Imperial Synod then the Senate may not raise a motion which is functionally the same until the next summit.

For a constitutional vote to pass requires a two-thirds majority vote of the senators of the Empire, whether or not they are present, or even in position at that time. The Imperial Constitution explicitly states that only senators may vote on such an issue, so no other Imperial title exists or can be created which can vote in a constitutional vote.

The Throne is assumed to be independent of the political affiliations of the senators. Any change to the law that has constitutional implications requires the approval of The Throne to ensure that the Senate is acting in the interests of the Empire as a whole. A motion that requires a constitutional vote cannot come into force without an Empress or Emperor to ratify it.

The General Assembly or the Assembly of Nine may veto any constitutional vote.

If a vote requires a budget to be allocated, the Speaker will ask every individual who voted in favour to remain standing where they are. The Speaker then suggests the minimum possible amount the individual who proposed the motion believes might be used to achieve the goal. If the majority of voters remain in favour then the Speaker will keep announcing a higher figure until enough citizens cross the floor that there is no longer majority support for the motion at that level of expenditure. The motion is passed with the highest level budget that received majority support.

Although there are limits on how often the Synod may act they are entitled to veto any motion passed by the Imperial Senate. Formally, a motion passed by the Senate does not become law until the beginning of the next session - as this is the time limit by which the Synod must act if they intend to do so. Traditionally however, employing the veto is sufficiently rare that the Senate usually goes about its business without delay. Only a coronation is automatically delayed until the beginning of the next session.

If members of the Synod wish the Senate to delay implementation of a motion, while the power of the veto is sought, then the best way to achieve this is to tell relevant individuals in the Senate. The conscience of the Senate, or any cardinal who tells the Speaker for the Senate that they intend to seek the veto will be sufficient to delay a disbursement until the beginning of the next session. The priest may also speak directly to any senator or citizen who has been charged to act by the Synod requesting that they delay acting until the Synod has had time to consider the matter.

Citizens are not legally compelled to wait - but any citizen that does not do so is taking a grave risk. If a citizen acts on a motion that is subsequently vetoed by the Synod, then that citizen is likely to be found guilty of subverting the agencies of state. The severity of any punishment will be based on how reversible the actions are and how aware the citizen was that the Synod intended to veto the motion.

The Speaker for the Senate has the authority to raise one or more motions in the Senate by adding them to the agenda. These are usually described as administrative motions to stress their non-partisan nature and commonly have two purposes.