This page refers to the Urizen martial archtype; for the Paragon of Vigilance see the Sentinel

The Arts of War

Warfare is just another way to enact change, another strand of the Net of the Heavens.

Many sentinels choose to focus their fighting skills, devoting their life to the goal of mastering a single fighting style or approach to combat. They often seek to express a wider philosophy through the style of warfare they embrace. For example, a sentinel who strives to become an immovable object who stands firm and breaks any enemy who comes against them might specialise in the use of a shield, cultivate physical stamina, and channel their inner strength into recover quickly from the blows of their enemy.

Another sentinel might study a philosophy that stresses flexibility, believing that the ultimate warrior is one who can adapt themselves to any need. They might master multiple weapons, and perhaps learn a little healing or combat magic, viewing magic as one of the many weapons they can wield as circumstances require. While doing so restricts their ability to wear armour they can further demonstrate their arete through the mobility granted by mage armour, or eschew armour altogether. Such an individual would tend to prepare the weapons and armour for each battle, depending on who they are fighting and in particular on who their allies are – perhaps even going so far as to specialize in supporting or complementing their allies approach to the battle.

The wise sentinel understands that arete is not achieved through mastery of their chosen weapons alone, but also requires intense preparation and commitment. Each battlefield is a node in the net of the heavens, a moment to make great changes to the world - the sentinel trains and prepares them in accordance with their chosen philosophy. An immovable object will often favour potions that enhance their stamina over those that improve their ability to strike their foes down, while an adaptable, mobile warrior might look to acquire magical items that compensate for the weaknesses of lighter armour or ways to increase the range of options available to them during a battle.

Sentinels strive to be mindful of the Net of the Heavens. To be effective requires a warrior to identify the perfect moment for a strike. Prolonged engagements are wasteful and to be avoided where possible; the ideal strategy commits troops only at the pivotal moment when they can transform the outcome. Sentinels are far from pacifists; they actively seek out battle, the better to master their skills and demonstrate their Arete. The best generals are those who can achieve victory without wasted lives or effort.

Most sentinels also have a deep appreciation of the vital need to be able to cooperate effectively with others on the battlefield. A duel between two warriors is radically different to a battlefield involving scores or hundreds of opponents. Few sentinels have much time for a Dawnish glory seeker. To actually be effective on the battlefield often requires the sublimation of the individual's identity to allow those engaged to form a single fighting unit. Sentinels from different spires will seek out opportunities to train together looking to develop their ability to form larger combat units from smaller, seemingly disparate groups.

When fighting alongside other nations, sentinels often prefer to stay in reserve, avoiding the front lines of a battle – they observe the unfolding conflict and quickly decide where their particular skills can make the most difference to the outcome, then employ those skills with ruthless effectiveness before moving on to another crisis point. This often means engaging at the point where fighting is most fierce, bringing relief to beleaguered allies who are about to be overrun. 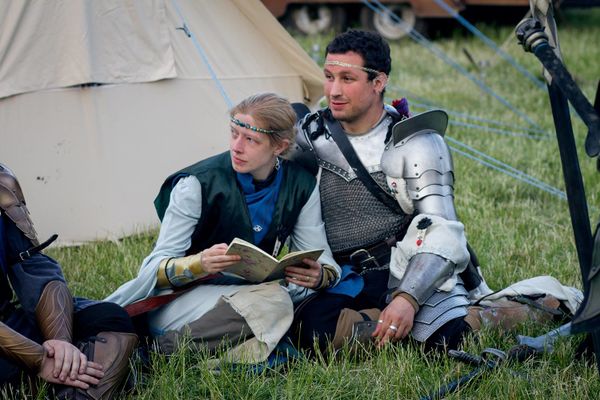 Sentinels are scholars as well as warriors.

Although sentinels are defined by their commitment to warfare, the majority see scholasticism as a vital part of that philosophy. Obviously they train and study to master their weapons, but it is a rare sentinel who will pass up an opportunity to read an important tract on strategy, tactics, or warfare. Most spire and citadels have a library at their heart and many Sentinels see it as their duty to commit their philosophy and ideas to writing, so that they can be tested by their peers and studied by future generations. Not every Sentinel is an academic, of course, but most see themselves as complete students of martial philosophy not mere soldiers or warriors.

Adaptability is a key concern for many sentinels, and they are often especially cognizant of magic that can help them expand their repertoire of abilities. As simple an incantation as empower is easy to underestimate but can grant additional prowess at just the right moment - especially for a sentinel who has mastered multiple weapons. There are a slew of enchantments, especially in the lore of Summer that can make a sentinel more powerful. Rituals such as Swan's Cruel Wing, Strength of the Bull, or Devastating Maul of Inga Tarn have an obvious application but there are many others. A sentinel might expand their repertoire of weapons for a certain battle with the use of Barked Command of the Iron Serjant, or seek out a magician who can perform Vitality of Rushing Water when facing Druj or venturing into a vallorn.

What marks a sentinel though is their complete commitment to the arts of war. To most Urizeni, magic is a weapon just like any other. There is a world of difference between a magician who has wandered onto the battlefield to cast spells and a sentinel who uses magic as part of their arete, of their total mastery of the battlefield. A sentinel is someone who gives their life over to the preparation and mastery of the martial arts - whatever fighting style they adopt.

Because of this focus, few bands of sentinels master ritual magic as part of their training; it is more common for them to eschew ritual magic, even among those sentinels who learn a little battlefield magic. Mastering a ritual lore is a time-consuming process that requires the sentinel to split their focus - something that can make it very hard to maintain areté. Some purists go further still, arguing that one cannot be a “true” sentinel if one possesses any ritual lore at all. They harbour a deep suspicion of sentinels who master ritual magic, often dismissing them as "dilettantes" who are incapable of focusing on the arts of war. Particular contempt is reserved for those ritual magicians who simply don heavy armour during battles and call themselves sentinels.

Regardless of their views about including ritual magic within their own arete, few Sentinel are shy about taking the benefits of enchantments provided by others, indeed it is usually considered part of the essential act of preparation for war. Some citadels include a coven of martially-inclined magicians who support the sentinels with ritual magic - sometimes seen as a rare reversal of the power-relationship between mundane warriors and magicians. Perhaps unsurprisingly, such covens occasionally encounter prejudice from more traditionally minded Urizen. Other sentinels maintain good relations with covens outside their citadel, offering them protection or martial aid in return for magical support - but such relationships can be unreliable and subject to the vagaries of Urizen and Imperial politics.

There are many philosophies of war in Urizen.

A sentinel may be part of a small band attached to a traditional spire, or may be part of a citadel - a spire that focuses on martial excellence. Sentinels who are part of a spire dominated by magicians are likely to have a different attitude to their role than those who belong to a citadel run by warrior-scholars. The arbiter of a citadel is likely to be a mundane warrior, for example, and positions of authority will often be filled with characters who have little or no magical power. This can present significant obstacles of course - but playing a group of skilled mundanes in a nation politically dominated by magicians can be an enjoyable challenge.

If you are playing a sentinel, then a background serving with the Citadel Guard may give your character a strong background as well as useful connections to other Urizen characters. If you're playing a former member of the army then you're encouraged to look out for and support other characters in the nation with the same background - but it's better not to assume that you'll be able to call on anyone for help initially. If you're a new character especially it's much better to approach former members you can identify with a view to finding ways to help them. Only once you've built up some credibility are you likely to be able to call on your new allies for similar support.

Sentinels are warriors, but they are Urizeni warriors, and they embrace the themes of arete, poise, and personal philosophy. While combat ability is often dependent on the appropriate skills, you can use those skills to help reinforce your Urizen nature. So instead of saying "I fight with a shield, because I spent points on shield use and will be the best at using shields" you might say "I fight with a shield because I am the immovable object. I have a big shield and wear heavy armour and ensure I have all the health and constitution boosting enchantments and potions" or "I fight with a spear because I want to be the quickest thing on the battlefield. I wear medium armour to help me run around, and use tonics and enchantments to ensure I’m not too disadvantaged by the lighter armour." In this way, rather than just being defined by just the weapon you carry and how you’ve spent your character points, your philosophy shapes how you prepare for battle, how you boost your skills, how you train, how you present your skills, and can even shape how you act in non-combat situations.

Thanks to Isidore Sanders for important contributions to this page

I hear and I forget. I see and I remember. I do and I understand.