Let all power be guided by virtue.

A symbol that has been used by the Order in the past has been a seven-spoked wheel with each of the triangles between the spokes coloured differently with one of the colours of the rainbow. 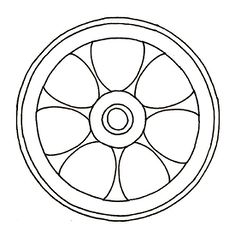 The Order of the Sevenfold Path holds the following to be true:

The Order of the Sevenfold Path exists to:

This is the order that contains the largest number of magician-priests, and many of its members also vote in the Imperial Synod. Some wags have dubbed the Sevenfold Path as the "Magician's Assembly". Even those members who do not also sit in the Synod tend to be politically active. Most members take their self-appointed task encouraging their fellow magicians to keep to the Way very seriously. At the very least, they have a great deal of interest in ensuring that the archmagi and their fellow grandmasters are virtuous. With the Synod unable to revoke titles in the Conclave, the Sevenfold Path traditionally see part of their role as using the Declaration of Candidacy and Declaration of the Balance to ensure corrupt or heretical citizens do not rise to high office in the Conclave. Likewise, they take the Declaration of Sorcery very seriously and seldom balk at using it to remove power from those they consider to be a threat to the stability of the Empire. Finally, this is the order that has historically made the most use of the Declaration of Interdiction to protect the souls of their fellow citizens from dubious magic.

Devout magicians are joined in this order by magicians who genuinely seek to ensure the future of the Empire. In recent years several Imperial Orcs have joined the order. This lead some members to quietly agitate for a change to the manifesto; originally the first point mentioned human destiny rather than the destiny of Imperial citizens. Following a Declaration of Concord by the Conclave, a motion was brought before the Senate and the wording changed to recognise that not all Imperial citizens are humans. Most orc members appear unconcerned, both with the change and the original wording, although it has (perhaps predictably) outraged some traditional members of the Order. A vocal minority claim that with this change of emphasis, the Order is no longer concerned with the wider destiny of humanity but solely with the destiny of the Empire - a narrowing of vision that could be seen at best as cowardice and at worst as betraying the original spirit of their Order.

The Order of the Sevenfold Path has traditionally chosen grandmasters who are strong in virtue and faith, usually priests. Of all the orders, the Sevenfold Path tends to have the worst access to crystal mana as many of its members are leaders of a congregation, rather than controlling a mana site. Consequently, the order is usually more measured in the addresses and declarations raised.

One particular ritual that often receives special attention from the Sevenfold Path is Mantle of the Golden Orator. This ritual allows the Sevenfold Path to directly aid their allies in the Synod; they know the value of giving a larger voice to those priests who speak in support of the Conclave and of magicians in general.

Each summit, the Conclave vault of the Sevenfold Path garners the following resources;

Each Conclave order is led by a grandmaster who is elected by their members. This title is currently held by Fenoren Aleyne; it will be reelected at Spring Equinox 384YE. The table to the right shows the citizens who have been elected as grandmaster of the order in the years since Empress Britta died.