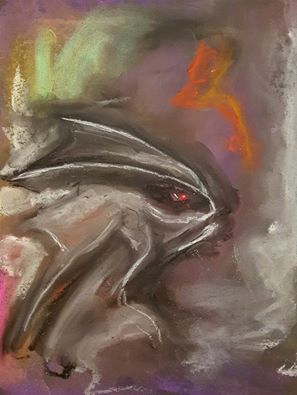 The most common sobriquet for Soghter is Changer of the Ways.

In the Principalities of Jarm, Soghter is called The Intrepid Dragon of Infallible Reason, and seems to enjoy this name prompting magicians around the world to start using it. Soghter appears to share the tendency of many Night eternals for enjoying flattery, while being largely unmoved by it. Soghter is also known as oroborous and the serpent-eating-its-own-tail is a symbol often associated with the creature and its fascination by cyclic behaviour.

In some parts of the world Soghter is referred to as the Snake-Spawner or Mother/Father of Serpents. According to those who use this epithet, those who deal with it have a dramatically increased incidence of naga blood in their offspring. Soghter has never admitted any link, and it is difficult to prove one way or another.

Along with Murit, Soghter is sometimes called the Azoth after a theoretical alchemical compound that enacts miraculous transformations - magicians performing rituals such as The Eight-spoked Wheel, The Retrograde Wheel and Distill the Serpent's Stone sometimes evoke the name during their transformations (although Soghter is better suited to rituals that transform the individual, such as Transmogrification of the Soul's Echo. Some scholars suggest that Soghter and Murit are lovers or siblings; others maintain that they are actually different facets of the same entity. A few alchemical treatises contain images of the two serpents wrapped around each other as illustrations of the way disparate substances can be combined together to create new materials. Neither eternal seems inclined to discuss their relationship, if any.

In its true form (inasmuch as the Night eternals have true forms), Soghter has a black-scaled serpentine body with wings of brilliant white and eyes that shift kaleidoscopically. Evidence for this appearance seems entirely anecdotal, based on descriptions by heralds; no Imperial magician has reported actually encountering Soghter in this form. As with all Night eternals, Soghter is a shapeshifter and more than most it appears to revel in assuming unique appearances whenever it is encountered. It may appear to be male or female (as with most Night eternals gender appears to have little meaning to it), but its forms almost invariably include strong elements of either black or white. They also often include images of caterpillars and butterflies or moths, as well as other creatures that undergo profound physical changes as they mature.

Soghter's primary interest is the way that living beings change naturally over time. It is fascinated by the way that a creature transforms from being young and inexperienced to being old and wise. It adores the "ceremonies of life" - the way mortals mark the transition from one life-stage to another, both for the effect they have on the individual undergoing the change and the way they affect other mortals. The change from child to youth to adult to elder to death is endlessly absorbing for Soghter.

It emphasizes the idea that only personal experience is relevant, and disdains the relevance of instruction whether by another person or via books. To have value, Soghter believes every lesson must include practical hands-on experience, and that creature learn most profoundly by doing rather than my listening. It encourages people, especially young people, to take risks and seek our new experiences regardless of the concerns of their elders or peers and for this reason exposure of the young to Soghter must be carefully monitored.

The eternal itself appears to be a creature of cycles, progressing from one state to another and then returning to the start again. Some scholars have commented that Soghter shifts in personality in a predictable sequence from child-like wonder to passionate sensate to enigmatic riddler to seeker-of-mysteries, and then back to the beginning again. It denies this cycle exists, claiming that it lives in the moment and it is always the way it is at the moment. Some magicians claim Soghter is completely insane by human standards.

Soghter is fascinated by death, seeing it as a profound transformation from one state to another rather than an end. Indeed, as a Night eternal Soghter appears unable to accept the idea of something coming to an end. Several times it has asked to observe someone passing from life into death, and is said to find the experience profoundly moving - as being in the presence of the most absolute enigma in existence.

Change is fundamental to Soghter, but it is primarily interested in the way living creatures change. It loves the moment of enlightenment that comes when someone understands a riddle, the way the heart quickens when a creature realises it is in love and the way that mortal beings change completely between one meeting and the next.

All the Night eternals have an affection for those with naga blood, but Soghter seems to extend this affection to beings of all lineages.

Soghter offers boons of transformation, whether temporary or permanent. One of its sought-after boons is the shedding of skin, a gift it offers to those who wish to completely re-invent themselves. The recipient tears away their own skin, revealing a new being underneath. Often this being has the naga lineage, but depending on the transformation they seek any or all other details of their life may have been entirely changed - memories, skills, goals, personality, curses, illness, injury ... anything.

Its aid is not always useful. Soghter is a champion of the idea that any obstacle can be overcome by changing oneself, and this is sometimes frustrating. It may suggest that a village threatened by bandits move. ... or transform into sparrows, or become bandits themselves, rather than that they take action against the bandits. In one story, Soghter 'helped' a Varushkan vale survive a flood by turning everyone in the village into salmon.

It has several times offered 'help' to those who have become trapped in stasis or stagnation - one memorable story speaks of an occasion when a Thresher lured an immortal sorcerer into Soghter's domain and without pause it 'released' the wicked magician from the trap of its immortality by transforming her into a cloud of butterflies.