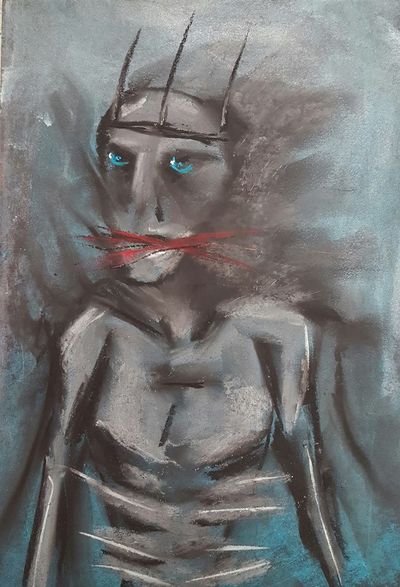 Sorin is the ruler of a bleak sand-choked wasteland called the "Silent Kingdom".

Most commonly, Sorin is called the Hungry Wolf.

He is also known as the Tomb King, the Empty One and sometimes as Devourer-of-Hope. among the Icewalkers of Wintermark he is called the Hunger-Crow.

He is occasionally called Father of Draughir or Master of Whelps although these names have more to do with his association with cruel strength and mastery over suffering than with any biological connection to the Draughir.

This Winter eternal appears as a deathly pale, emaciated man dressed in tattered funereal finery, often with a furred mantle and often in the Highborn style. He usually wears a crown of fingerbones, or carries a rod made from bones wired together with weltsilver and tipped with dragonbone - the trappings of a heathen king. These trappings are reflected in his demeanour - he expects to be treated as if he were a royal sovereign and has little patience for familiarity or disrespect.

He inhabits a sand-choked wasteland, sometimes called the Silent Kingdom. He rules this empty demesne from a palace of black basalt and polished bone that stands at the heart of a nameless necropolis city. His realm is scattered with tombs, mausoleums, burial mounds and memorial stones from all know nations of the world, and many more beside.

Sorin is an eternal of hunger and thirst. He represents physical lack of sustenance, but is much more interested in the way that privation and suffering build strength. He is cruel, but not needlessly so - he does not encourage others to be cruel for the sake of it, but to allow them to survive and gain strength. If he were asked, he would say that he is cruel, because the world is cruel.

He is fascinated by terrible choices and no-win situations. Deep moral and ethical dilemmas, and their resolution, are as interesting to him as more straightforward challenges. He constantly asks whether the ends justify the means, probing those he deals with to expose any hypocrisy. He never judges, however; he simply forces people to confront their own failings and weakness whenever he can. Sorin is not above manufacturing situations where individuals or groups will be forced to make difficult decisions. He is sometimes seen as a dark mirror of the Summer eternal Barien, an idea that he finds amusing (up to a point).

The Wolf of Winter has no patience for opinions or beliefs. He deals in hard facts as gathered through actual situations. One of the most dangerous things for a mortal to do when dealing with Sorin is to put forward a belief about themselves that has not been tested - the Tomb King sometimes sees it as an open invitation to create a situation where their belief will be tested, almost invariably with terrible, tragic results. "People believe that they can withstand adversity, but until they are confronted with it, belief is all it is. Until you are tested, you cannot know for sure that the morality you profess is true, only that you believe it to be true. Belief blinds more people than it enlightens; it binds more people than it liberates."

The Tomb King is known to favour draughir more even than is natural for a Winter eternal. He seems to view them as his children, and has at times been described as being indulgent or paternal towards them. He can even offer a boon that will transform a human into a draughir, or strengthen the lineage of one who already possesses it.

He is known to have an intense dislike of the Thrice-cursed Court - some stories claim that at one point he was part of their court but that he managed in some way to free himself from his curse of eternal hunger and thirst by "sharing" it with the world. Sorin refuses to comment on this story, and becomes angry if pressed.

He is strongly associated with the rune Naeve and, paradoxically, occasionally with Verys, the rune of strength. 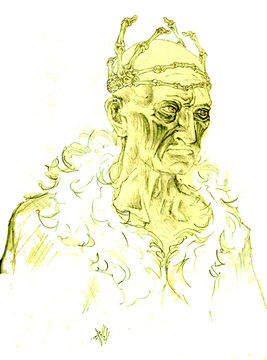 The hungry wolf fosters and encourages strength, but only the strength that comes from abandoning weakness. He encourages the ambitious to embrace expediency in pursuit of their goals. Sometimes the price he demands is straightforward (he is known to have a taste for dragonbone as well as for relics of the honoured dead). Often, it is a pact, oath or agreement to engage in or refrain from a certain behaviour - one boon he has offered several times is a boon of martial might that comes at the expense of the ability to create bonds with other people.

Sorin can provide boons that help people endure privation - whether that privation comes in the form of wounds or the slow suffering of hunger, sickness or thirst. One of these boons takes the form of a draught of wine that will transform a human into a draughir over the course of a single night - or strengthen the lineage of one who already possesses it. According to stories, if he infuses this wine with a droplet of his own blood it can transform someone who already possesses lineage into a draughir. 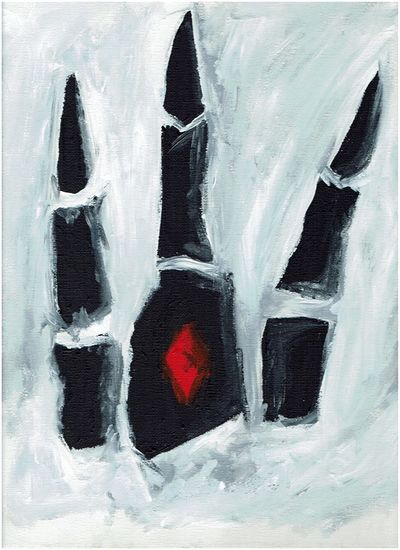 Sorin wears a Crown of Bone and rules a city of tombs.

He can also offer some metaphysical boons - Sorin is said to be able to remove the pain of grief from an individual with a touch, for example, as well as the memory of a loved one.

Wintermark scholars point out that the rune Naeve, which has strong associations with Sorin, represents more than physical hunger. It also represents the hunger for power - ambition. Many magicians who seek an audience with Sorin do so in the pursuit of boons that will increase their power (such as that granted through the ritual Sorin's Rite of Agony). Some seek his assistance in gaining temporal power, but they must be prepared to endure an inquisition at Sorin's hands if they want his aid in such matters, and they should be prepared to answer truthfully.

Finally, Sorin has a strong resonance with ideas of kingship. He seems more keen than most eternals to help establish regio in the mortal world. He can lay terrible curses on those who attract his displeasure. He can send powerful malign spirits to the mortal world to form potent animated horrors (often using his hounds for this purpose). He has been known to provide additional might to rituals such as Quickening Cold Meat, as well as to offer members of his tomb guard to fight alongside mortal warriors.

Unlike some eternals of Winter (the Thrice-cursed Court for example), Sorin appears to deal "fairly" with mortals. If he offers a gift, he will make the consequences of accepting that gift apparent - there is never a hidden curse when dealing with Sorin. This is not to say that his gifts are without price, quite the contrary. His belief that strength comes from suffering means that his boons are invariably two-edged swords. Much of the challenge of dealing with Sorin lies in deciding if the price he asks is worth the benefit he offers.

Also, boons of Sorin have been known to backfire with tragic consequences; he is utterly merciless and uncompromising in pursuit of payment for a boon. The story of the Marcher steward who received Sorin's aid to defeat a monstrous wyvern that was terrorising her yeomen agreed to offer a blood sacrifice to the eternal of "the first living being to touch you after your victory." In the end, despite preparations, the first living thing to touch the steward was her own daughter. When the steward refused to honour the pact, Sorin granted malign life to the skeleton of the wyvern creating a monster much worse than it had been in life. The beast rampaged across the stewards land and that of her neighbours until she was forced to fulfil her agreement with Sorin.

Wise bargainers pay in advance when dealing with Sorin.

"You cannot eat hope, nor drink it, nor shelter in it from the gaze of the noonday sun, nor warm yourself with it when the night is dark and the snow falls. You cannot strangle a murderer with pride, nor free yourself from shackles of despair with love, nor defend your walls with mercy, nor find your way across the wasteland with compassion." 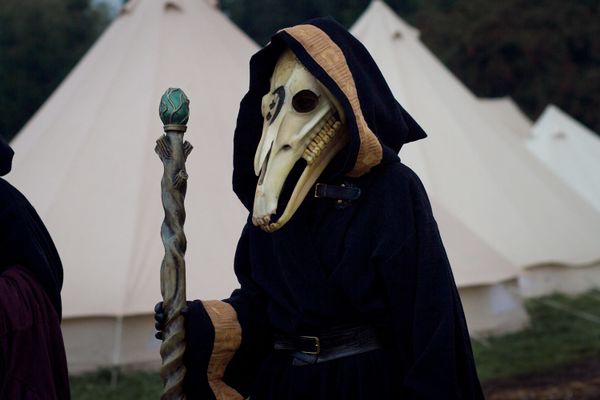 A dour herald of Sorin about their master's business on the field at Anvil.

The heralds of Sorin usually appear as either very high lineage draughir or animated corpses or skeletons. They are usually clad as courtiers or knights, and reside in his gloomy sepulchral city. According to some magicians, Sorin seeks the mortal remains of particularly famous individuals and binds Winter spirits into them to create many of his more powerful heralds - while they may have the countenance of a dead champion, however, they have none of their memories. Unlike Kaela, Sorin does not usually welcome living beings as heralds (despite their cadaverous appearance insight shows that heralds of Sorin are creatures of the realms, not unliving creatures or spirits).

In plazas and parade grounds across his dark realm stand motionless legions of skeletal or mummified soldiers. They often bear tattered, faded banners and are often accompanied by musicians, scouts and heralds. Historians claim that some of them are possessed of a grim intellect, but live only to fight at Sorin's command. From time to time he will offer a magician the ability to call on a band of his tomb guard.

The Hounds of Sorin

Sorin is said to command a great pack of starving, ghostly wolves that serve as his eyes, ears and occasionally messengers. Some of the hounds are thus given a humanoid form, with a variety of wolf- or dog-like characteristics, and sent out as agents. Sometimes, Sorin will bind one of these ghostly canines to a skeleton or corpse to create a monster. He can also infuse a living being with the essence of one (or more) of his hounds to grant them great physical prowess at the cost of unholy hungers. A few people who have gained Sorin's ire have spoken of being hunted by invisible hounds that invade their dreams, and there are several stories of such people vanishing without a trace one cold winter's night.