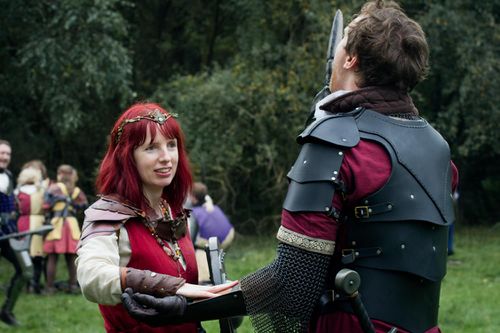 Magic can heal or harm with equal facility.

A magician is any character that purchases the magician skill. Becoming a magician allows a character to cast spells, and with additional study they can master the realm lores that allow them to perform powerful and versatile rituals. Like artistic ability, command of magic is both a talent and a skill - some people are born with a natural knack for working magic, while others develop their ability to weave spells through hard work and long hours of study. Even a natural talent needs help channelling and honing their power, however - there are many stories of prodigies who lack the ability to control their magic properly causing minor magical mishaps.

In the Empire it is common for a magician to learn their art studying with a more experienced mentor. It is theoretically possible to be "self taught" however - there are libraries and tomes that lay out magical law in all the nations.

Every magician, no matter where in the world they originate, learns three common spells (sometimes called cantrips in the Empire): detect magic, operate portal, and create bond. These versatile utility spells allow a magician to perform a number of functions, and serve as the foundation for all other magical ability. These spells are only the beginning however - with additional study a magician can master more incantations that allow them to channel their personal magic to heal their allies, repel their foes, and even grant the recently departed the ability to speak to the living.

In addition, every magician knows how to wield wands and rods. These implements are to the magician what swords and axes are to the warrior, or medicines and bandages to the physick. Their main use is to channel and unleash martial incantations, but even the most peaceful magician can benefit from bonding a magical implement to enhance their ability to work magic.

Finally, some magicians focus their magical study towards battlefield applications. These brave individuals are called battle mages and they learn to channel their power through staffs and attune themselves to special armour designed specifically to protect magicians while leaving them free to perform magic. This last is especially valuable to magicians who go into dangerous situations; mundane armour prevents the casting of even the simplest spell.

Any character that purchases the magician skill has four personal mana and is able to cast create bond, detect magic or operate portal. Each time a character purchases an extra spell they must choose one additional spell from the spellcasting list.

Your character may also use crystallized mana to cast spells; a single crystal can be used to cast any single spell.

All spell vocals require appropriate roleplaying which must include spell vocals in a clear voice audible to everyone within a few metres of you. All spells are one of two types, regular spells or offensive spells.

To cast a regular spell you must complete at least thirty seconds of appropriate roleplaying including spell vocals, and the use of one hand. These requirements do not mean you must chant or speak for the entire thirty seconds; you must include some vocal component but your appropriate roleplaying can also involve tracing magical signs or runes in the air, using props such as scrolls or powders, shaping magic with mystical passes, and the like.

If you or your target attacks another character or either of you are hit then the spell fails. Your mana is not lost but you must begin the spell again.

Any magician who knows a regular spell can choose to swift cast it. Swift casting effectively allows the regular spell to be cast as if it were an offensive spell, but at the cost of an additional mana.

Some spells such as purify and heal have different effects when swift cast. You must make clear to the target what the effect is.

If you deliver an offensive melee strike to touch the target with your implement then the target also loses one global hit. You should always assume that your opponent has wounded you in this way unless their roleplaying clearly indicates otherwise.

Offensive spells are not interrupted or lost if you are attacked. For spells other than venom or weakness you do not lose the mana if it is clear that the target has not taken the effect.