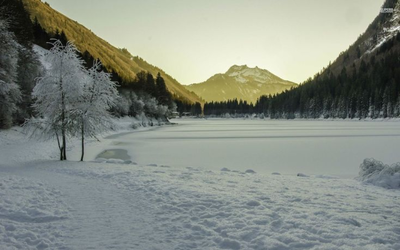 Whitelake is frozen almost all year round, and beset by powerful blizzards.

The Storm Shaman is an Imperial title awarded to an Imperial Orc citizen. It brings with it custodianship of a sinecure located in western Skarsind, called Whitelake, which provides a bounty of crystal mana. The sinecure was commissioned in Autumn 380YE, by order of Bloodcrow Yargol, the Civilian Commissioner of the Imperial Orcs.

There are signs that the Thule orcs were also interested in Whitelake and the Storm Pass, but the precise nature of their interest is unknown at this time. As they control the far side of the pass, if their interest persists this may create problems for the Storm Shaman.

The title holder is expected to be an adept at invocation or ritual magic, and ideally should be a shaman as well. They are responsible for protecting the pass through which the white winds pass, and are charged to experience the storms and learn as much as they can about their magic, and their ancestors by doing so. In the event that something threatened Whitelake, or the Storm Pass, the Storm Shaman would be expected to deal with this threat.

Crystals of the Storm

As a sinecure, the Storm Caller receives an income drawn from mana left behind in the wake of tumultuous storms.

The holder of the sinecure receives nine crystals of mana each season.

The title can be held by an Imperial Orc citizen. The Storm Shaman has tenure, and serves until they die or step down. They can be revoked by the General Assembly, the Imperial Orc National Assembly, and by the Assembly of the Nine.

Whitelake and the Storm Pass

Hidden between the sweeping valleys in north-western Skarsind, up where the mountains shade into the Silver Peaks, is a certain lake fed by an undergound spring. The Suaq called it "White Lake", as its shores were covered by a thick blanket of snow almost all year round. The water itself is usually frozen, except during the height of summer. When the sun burns the brightest, the ice melts and small mana deposits can be claimed from the frigid lake bed. Even in midsummer, though, the lake is far from hospitable.

Above the lake is the Storm Pass, an opening in the mountains allowing the bravest Suaq hunters to cross into Skarsind from Sermersuaq. It was not much used, before the Thule came. High up, difficult to reach, and often wreathed in snowstorms, all save the most desperate hunters would rather spend an extra day or two travelling south to one of the more accessible passes than risk the Storm Pass.

The Storm Pass is worthy of its name. The wind that funnels down the sides of the mountains and passes over the lake is harsh and as often as not it brings snow with it. Sharp, bitter, chill - and giving rise to vicious storms that batter the north-western mountains. When the storms blow their fiercest, and hurl daggers of ice down from the mountain peaks, sensitive souls might fancy they can hear voices carried by the wind. The Suaq spun tales about these voices, claiming they were the cries of those hunters who had died trying to traverse the pass.

The first imperial Orc scouts came to the Storm Pass, and to Whitelake, during the harsh winter of 379YE. They marvelled at the elemental fury of the storms that rose in the peaks and rolled down into the hills below. One of their number - a shaman - was particularly affected. The howling winds brought to mind the howling abyss, and the unflagging fury of the blizzard stirred her blood - and the voices of her ancestors. She was the first, but not the last. A steady stream not only of shaman but of orcs seeking some form of spiritual communion have come to Whitelake, walking along the edges of the raging snowstorms. They swear that when the winds are at their angriest, when the snow and hail is at its most violent, they can feel their ancestors reaching out to them and joining their voices with the voice of the storm. There have been a few deaths - the wind is not gentle, and those who do not take suitable precautions are found frozen solid - if their bodies are found at all.

In the months following the Autumn Equinox 380YE, a lodge was established on the shores of Whitelake to offer shelter to those who expose themselves to the storm in hope of achieving a closer communion with those who have gone before. At the same time, a series of mithril-inlaid perimeter stones were placed not only around Whitelake, but along the steep path leading up to the Storm Pass. The presence of these stones serves not only as a potentially life-saving guide to those lost in the storms, but also to channel, and ultimately capture, a little of the mana that streams down the mountains along with the raging winds.

Whitelake is slowly becoming a place of pilgrimage for orcs eager to hear their ancestors. The sound of the drums echos throughout the valley and the smoke from the fire lingers along the icy waters like an evening mist

This title is currently held by Ashborn Rauur. This title has tenure, the occupant may hold the title until it is revoked, they die or they relinquish the position. The table to the right shows the citizens who have been elected to hold this title in the years since Empress Britta died.