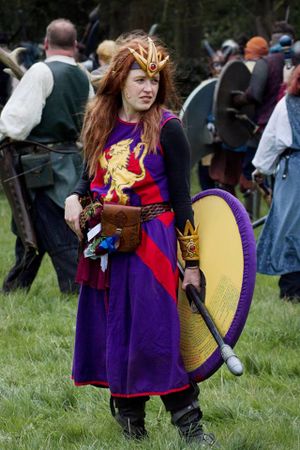 A stormguard bulwark helps a war witch survive on the battlefield - and
wield their magic more effectively.

While armour makes it impossible for a magician to perform magic, a skilled battle-mage can get great use from a shield, even one that is not enchanted. A stormguard bastion is usually decorated with tempest jade, and painted with pigment infused with iridescent gloaming. Feresh, the rune of majesty, is often marked twice on these shields, to symbolise the enhancement of both the wielder’s magical and martial prowess.

In Wintermark it is traditional to finish a stormguard beneath the raging clouds of a thunderstorm. The artisan strives to capture both the physical power of the wind and rain and the more mysterious power of thunder and lightning; the dual elements combine so that the shield empowers both body and mind. An occasional scop spins tales where even the storms themselves should look for protection against someone bearing a stormguard bulwark.

The makeshift camp was nothing to speak of, little more than blankets propped up on spears to keep off the endless rain, and five of the six Sentinels of Coppermount Spire slept fitfully. Theodora, the implacable changeling, had decried the idea of drawing lots for the watches when night fell, and so it had fallen to her to take the mid-watch. She stared angrily out into the darkness, her sharp eyes watching for any disturbance of the moonless night’s shadows and her sharp ears listening for any hint of the gryphons they had come down into the valleys to hunt.

The landslide that had buried the six of them and half their travelling kit, forcing them to abort the hunt, had left her covered in clinging mud and in a dark mood that would not leave her until she had fought something. It was bad enough that when the young gryphon had attacked the group she had been trapped up to her shoulders in mud, face-down in a river of rainwater, fighting to breathe.

After the fourth turn of the glass, in the dead of night, the rain stopped as suddenly as it had started. The dripping from the rain-soaked shelter came irregularly, a pitter-patter that only stoked her irritation further.

When it returned, therefore, she relished the opportunity to take its hide for her own.

She heard wingbeats pass overhead, though she saw no hint of it. It must have come back up the valley. She knew it was hurt already, but it would have gotten over the wounds from the earlier battle. The venom that coursed through its veins from Gnaeus’ lucky spell, however, would not have gone. That was why it had returned at night. A desperate outcast from its pride, it thought to catch them sleeping.

It would catch only its death, Theodora swore to herself.

She listened to it circle not far overhead, showing no sign that she knew it was there. It wouldn’t attack if it knew there was someone awake, so she sat perfectly still, ready to turn and face it, and waited for the wingbeats to stop.

She spun and raised her Stormguard Bulwark, and the beast crashed talons-first into her. It yowled in frustration and pulled itself to its feet at the same time as she recovered her stance, and the two faced off against one another. Never try to take a gryphon on alone, Castor had told her when they set out. The over-cautious old fish might as well have slapped her in the face.

She took a step toward it – there was no darting in and out in this mud – and held her shield out at the extent of her reach. It was lighter and more mobile than she was; best find out what it thought its range was. Another step and it slashed at her shield. Good.

She feinted a lunge towards it, and when its counter-slash met only air, it faltered. She knocked it across the beak with her rod, and it shook its head.

Then, with a flap of its great wings, it pounced on her.

She managed to keep the shield between her throat and its beak, which was what really mattered, though its powerful back legs raked her thighs. She clubbed it with her rod once, twice, and on the third blow it reared back and gave her the chance she needed. With a heave and a shout she rolled it off herself and cast the healing spell she now urgently needed.

Stumbling to her feet, she met its charge again with her shield. It bit at the top of her shield and pulled hard, as if trying to tear it from her grip, and she kept striking viciously at it with the green-iron tip of her rod. Eventually it let go and snapped at her face, taking a chunk of flesh, before she bodily heaved it away onto the ground.

Theodora reeled and fought for the concentration she needed to heal herself again. The absurdity of it struck her then; how like a disobedient dog it had seemed, pulling at her shield like a toy. She laughed a slightly manic laugh and raised her rod, ready to fight again. This was battle as it should be. She could deal with it at range, and she could deal with it close-to. She controlled her surroundings, and the magic that her shield extended around her would keep her standing easily long enough to deal with such a pathetic little beast. She laughed again, a challenging laugh, a laugh in the beaked face of danger.

Then two arrows zipped past her and sank into the gryphon with a thunk. It fell with barely a sound, thrashed briefly, and lay still.

Theodora spun round to find the others awake, the strings of Girgis and Ignatios’ bows still trembling. Castor stood behind them, a look of absolute thunder on his blue face.

Theodora opened her mouth to protest, and then bit back the words. It took a lot for Castor to lose his poise. Then again, she’d lost hers somewhat. Laughing in battle and all.

She was probably overdue the lecture she was about to get.

Still, it had entirely been worth it.
Retrieved from "https://www.profounddecisions.co.uk/mediawiki-public/index.php?title=Stormguard_Bulwark&oldid=61566"