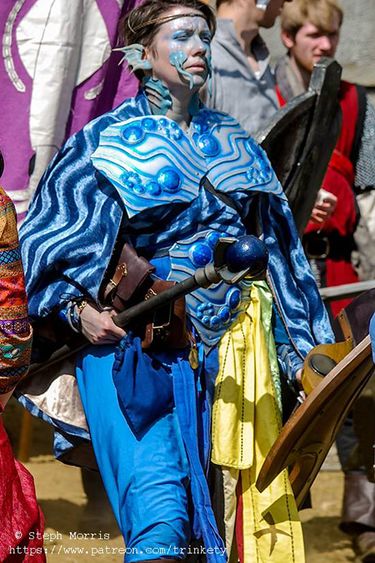 A Sunfire Pectoral gives both additional magical power, and additional protection in battle

A pectoral comes in a variety of forms, but the most common are a jewelled necklace that is suspended from the neck. They often have a large medallion, usually marked with runes. Regardless of their shape, a Sunfire Pectoral is formed of orichalcum alloyed with gold or occasionally copper, coloured and polished with iridescent gloaming, and usually with green iron alloy chains or buckles holding it in place. They are often inlaid with decorative gemstones. It is common to see a Sunfire Pectoral marked with a heraldic device in Dawn, the League, Highguard and the Marches, but even in nations where heraldry is not common they tend to bear a symbol of either a leaping flame (especially in the Brass Coast, where a particularly garishly decorated pectoral is sometimes called a Flav's flame after a notorious corsair battle-magician) or the sun - a common symbol of the Virtue of Pride.

Wearers often seem to be energetic and passionate, and are especially vocal about strongly held beliefs or philosophies. It is common for the pectoral to bear the rune Zorech, which accentuates these traits.

Captain Flavio i Flav i Riqueza swished his hair in a dramatic arc, and struck a pose that was better suited to a painting than the prow of a ship. His outlandish garb was stark contrast to the corsair vessel with which he traveled; the rich dark wood and plain white sails only drew attention to the preposterous nature of his clothing.

In one hand he held an ebony rod, tipped with an orb of mithril and in the other an ornate scimitar. His red-and-gold coat was open to the waist, secured around his hips with a woven belt of gold and mithril and at his wrists with bronze-and-orichalcum bracers. At his brow, a golden circlet encrusted with thumb-sized rubies kept his greying hair back from his eyes. However, the item that drew the attention the most was the outlandish medallion around which hung from his neck down to his bare, tattooed chest.

It was the size of a Dawnish dinner plate, and glimmered in the blazing summer sun as the ship flew across the waves to Midport; the roaring inferno engraved on its orichalcum-alloyed surface seemed to leap and dance. Its edges were studded with a dozen lustrous topaz, each one worth a princely sum while the green iron chains that held it in place appeared so heavy that it was a wonder he didn't bend double and fall straight into the sea.

He caught one of the nearby corsairs looking over; a new addition to the crew, a lass who'd joined them in Siroc. He smiled and winked at her and beckoned her closer.

“Ah yes, you were admiring this, I think?” he gestured to the oversized piece of jewelry with his rod, “This my girl, is my proudest possession. It gives me more power than all the mages in the Spires of Urizen!”

He laughed at his own boast, an infectious chuckle.

“I have had it since I was a knee high to a briar; since I first learned how to fight like a magician. ‘Tis filled with powerful enchantments you see; the more my enemies see it, the more power it gives me. That’s why I make it look like this. So that everyone can see it.”

He winked down at her, once more adopting a pose and glancing out over the sea. The girl put her head on one side and considered for a moment. .

“Isn’t it a bit...heavy, captain?” she asked, astounded that the old man could comfortably bear the weight of the medallion around his neck.

“Ahh, I’ve had a little bit of vigour woven into it each time I get the boss enlarged. The fire that burns within it fills my veins and gives me the strength of an ox. While I wear this, I’ll burn as brightly as the sun’s flame and twice as hot. The Grendel and the pirates, they know it when they see it and they know that death is riding towards them on the wings of the wind. Flav’s Flame they'll call this, when one of them catches me sleeping and manages to cut my throat. Until then ... I stand here on the prow, and I light the way ahead for us.”

"You should be to your duties or the first mate will give you the sharp side of her tongue! Perhaps this evening when we are safe in the parador at Midport I'll tell you the story of how it saved my life when I was shipwrecked on the island of Cos! Or the time I had to use it as a bowl to carry the waters of the blue lagoon to the witch Isolde!"

He chuckled a little to himself as the girl scampered back to the ropes she had been coiling. Flavio turned his gaze back to the horizon, scanning for trouble, and wondered how many more times he would enlarge the pectoral before death finally caught up with him.