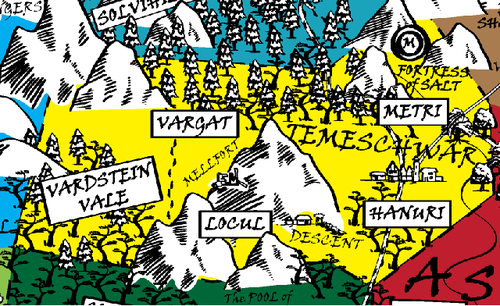 Temeschwar was once part of wild Varushka, but it joined the Empire alongside Sarvos and Tassato, when the League was formed. Citizens of Temeschwar commonly make an effort to be as flamboyant as their southern fellows, but their dress is inevitably more practical, to accommodate the harsh northern weather. They are tradtionally more brutally pragmatic than those who live on the bay. It is a foothold of trade to Varushka, Wintermark and nearby Dawn. Trading in raw materials and crafted goods, especially weapons and armour, it is seen by many as the merchant capital of the northern lands.

Despite its good relations with Varushka, Temeschwar has always suffered somewhat from being distant from Sarvos and Tassato whose close proximity made them the natural heart of the League. Temeschwar may well be the richest of all the cities of the League, but it can never quite shake the fear that it is not as good as the others. This anxiety is just part of what drives the Temeschwari to be so competitive and so ruthless. Temeschwari strive to work that bit longer and that bit harder than anyone else in the League. If a Sarvossian closes their shop at sunset, their Temeschwari neighbour will light a pair of lanterns and keep trading for another hour. 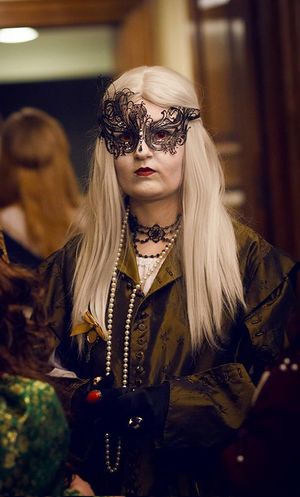 They wear their reputation for cold, hard dealing with pride.

Not all relations with Varushka are good, however. There is still some bad blood between those of old Varushkan stock in Temeschwar and the citizens of Delev in Karov. When Temeschwar joined the Empire it attempted to prove that it had legitimate ownership of the Eternal Shafts of Time, a rich mithril mine on the border between the two territories. There are still plays and theatrical adaptations that revolve around the underhand, ruthless way the boyar of Delev "stole" the mine from under the noses of the Temeschwari, and relations between some Delev traders and and some citizens of Temeschwar are chilly to this day - especially in the rare cases where there is some distant blood connection between the two.

The Temeschwari are not just the most competitive people in the League, they also have a well deserved reputation as the most ruthless. In the years before the creation of the Empire, the city was plagued by gangs of thieves and assassins who operated with open impunity despite the best efforts of the boyar, Ratibor. Thousands of inhabitants were linked with the different gangs who used tattoos to mark membership and enforce loyalty.

In the end Ratibor hired a force of Varushkan mercenaries and brought them in secret into the city during the depths of winter. In the notorious night of a thousand torches (named for the torches the soldiers carried to light their way) every inhabitant of the city was turned out of their beds, stripped and searched for marks. Anyone with a tattoo on their body was given a few minutes to collect their belongings before being forced from the city into the frozen snows beyond the walls. A few managed to bribe their way past the search but most were given over to the winter and were never seen again. The act was one of monstrous brutality, but it established the power of Ratibor as boyar and broke the power of the criminal gangs forever.

The Temeschwari wear their reputation for cold, hard dealing with pride. They view themselves as the strongest people in the League, combining the ambition and drive of the south with the strength and determination of the north. Physical as well as mental strength is prized here - Temeschwari bravos are as likely to favour the axe as the rapier - and her free companies have a reputation for toughness, as soldiers and as people. Most Temeschwari free companies are careful not to break the rules for they know the magistrates watch them carefully - but they will do almost anything required to win short of this. You can find many things in Temeschwar, it is said, but you will not find a scruple though you search the city from sunrise to sunset.

Rumours suggest that the vyig criminal organisation has become active again in the northern city. This Varushkan criminal fraternity is untied by an absolute hatred of Imperial law, and once threatened to overtake both Temeschwar and the League.

The Fortress of Salt

The mine workings here began as several jealously protected salt mines, until a major seam of mithril was discovered in one of the mines. The mine owner who first uncovered the seam used a number of both honest and dishonest tactics to take control of the other salt mines, allowing her to exploit what were later discovered to be massive deposits of mithril. One popular story was that the seam was actually discovered by a gang of orc slave workers, and while there is little proof either way, it was widely publicised by the abolitionsit cause during and after the orc rebellion. A number of songs were written about the treatment of these orcs, who urban legend claims were killed to prevent them revealing the discovery of the mithril ore before their owner could properly secure it. The historian Eduar di Temeschwar uncovered some evidence that these stories were based on actual events - but that early versions of the tale described the murdered miners as being League citizens. The truth will probably never be known.

This is an Imperial Bourse position. It is allocated to any Imperial citizen by open auction. It produces 25 Imperial wains of mithril every season.

In Locul, on the higher slopes of Mellfort Peak, stands old Mellfort. This ancient hillfort consists of a ruined set of concentric rings of black stone, believed to have been of Terunael origin (although some scholars claim the Terun simply adapted a much older structure, perhaps one built by The Sentinel). The fort was in ruins when the first Varushkan settlers came here, believed to be a casualty of the wars between the people of Terunael and the orcs. Human settlers lost no time in incorporating the sturdy stones of the ruin into their own fortification.

Throughout its history, people who have spent long periods of time here have reported strange dreams - dreams of sadness, loss and bittersweet remembrance. Unlike many such 'accurséd places' it gained a reputation for strangeness, rather than terror or fear, and in the early years of the Empire became something of a place of pilgrimage for those suffering grief or regret.

The fortification here was decomissioned during the reign of Empress Mariika, during a compromise which saw funds channeled to the fortification of Temeschwar itself. Mellfort has not seen use as a fortress for many years, but following the fall of Skarsind there was discussion of rebuilding it as a watchpost and beacon. In early 377YE the fortress was partially refitted to serve as a base of operation for groups of bravos hunting bandits and brigands preying on Temeschwari trade. Overseen by Bridget Eastville (senator for Mitwold) as part of a larger plan to provide protection to towns throughout the Empire, the defences are not sufficient to qualify Mellfort as a fortification, but they have already helped reduce outlawry throughout the territory. They have also lead to further discussion about completing the work and restoring Mellfort to its former glory as a strategically placed fortification. 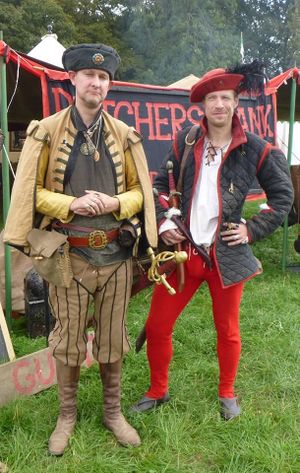 The politics of Temeschwar can be robust even for the League.

The main feature of Hanuri is the city of Temeschwar. (OOC note: Temeschwar is a rank two fortification.)
Keywords: City, Fortification

Much of the territory of Temeschwar is rugged and hilly, but in Locul the foothills rise steeply into the heights of Mellfort Peak which takes it's name from the hill fort built on the upper slopes. Before the forerunners of the League restored the ruins there, the peak was called Suyan. The mountain dwarfs the surrounding territory, for all that Urizen visitors like to claim (somewhat smugly) that it is not a real mountain. The peaks and foothills of Locul are the site of many propserous mines, especially those working green iron and weltsilver. One of the best known of these mines is Descent - a mining village built around a large open sinkhole at the foot of Mellfort Peak. Many years ago a stairs and ramp were built spiralling down into the depths of the Descent, and green iron is mined from an extensive cavern complex beneath. The Custodian of the Assayer's Guild often spends a lot of time surveying the mines of Locul, when they are not at their offices in Temeschwar proper.
Keywords: Hilly

The Fortress of Salt is found in Metri, very close to the border with Varushkan Karov.

A somewhat hilly region, dotted with villages and scattered areas of cultivated woodlands. Vargat is perhaps best known for the brewing of strong spirits, the good quality, thick-crusted dark rye-bread made from locally sourced flour known colloquially a Vargat Bianch, and for extremely strong-tasting pickled cabbage that is considred a local delicacy by those from Vargat, and a challenge to the digestive system and sense of taste by everyone else. Increased trade with southern nations, especially the Freeborn, has seen a recent fashion in Vargat for vegetable dishes prepared by fermenting with a variety of seasonings. It remains to be seen if this culinary fashion will become popular in the League.

The southern Vardstein Vale that slopes down toward Miaren has a reputation for wildness. While the periphery has been cultivated with a number of small woodland preserves, most of the woodland is left "wild". The forest is known to be home to many wolves, and to at least one pack of wily Dire Wolves. The decision to leave the Vale as a hunting preserve has caused occasional friction with the Navarr and Wintermark who point out that wild beasts do not respect borders. More artistically minded individuals point to the decision to leave the Vardstein Vale "wild" as reflecting a key element of the Temeschwari (and indeed League) soul. They are civillised, but they are not tame ...
Keywords: Forested