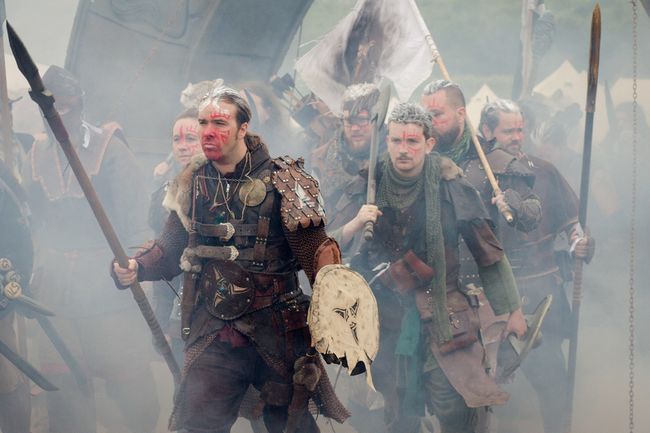 Wielded with precision, the Terunael Warlord helps a Thorn to take control of the battlefield.

The Terunael Warlord is a legacy of the earliest days of the Navarr. An orichalcum alloy head bound to an ambergelt-treated bleached-wood haft inlaid with tempest jade and wound around with iridescent gloaming, the weapon is supremely versatile in the hands of a skilled wielder. Employed with tactical precision, it allows a warrior to take control of the battlefield, whether that means driving an enemy out of a defensive position, tying a skirmisher down to counter their speed and manoeuvrability, delivering devastating blows to magicians and lightly armoured opponents, or taking advantage of chinks in the enemy armour to incapacitate or cripple them.

The tactical advantages this spear can provide mean it is also very much in demand among Urizen warriors and the rare magicians who make a study of martial combat. The ability to repel and entangle foes makes it a powerful adjunct to the battlefield magic practised by that magical nation.

Quintus stared up at the rippling threads of rainbow silk dancing across the chamber's breadth. The cool, dark interior was filled with the clattering and rattling of wooden slats and wheels, a fascinating work of warp and weft that shone with dazzling brilliance where a few shafts of light punched down from high windows.

“Aleksandros' greatest work,” the senior Sentinel was saying, gesturing out with his orichalcum-headed spear. The weapon gleamed a steady, golden hue as it thrust into the light, starkly solid against the swirling, smearing colours that danced across the loom. “Fusing the art of the loom with that of the stargazer – binding gloaming and silk together in an unending torrent, ever refining itself. A tapestry of enchanted threads that he hopes will grow ever closer to the Net of Heavens itself and, maybe, one day will become it.”

Quintus frowned. He'd heard of the Loom, of course – who in Skyspire hadn't? – and was glad to finally have a chance to see the beautiful masterwork that ancient, withered Aleksandros had spent a lifetime devising, even in the face of growing concern from his coven-fellows. He just wasn't exactly sure what his tutor had brought him here for.

For the moment, Hastatus didn't seem interested in enlightening him further. The Sentinel just watched the flowing movements of the multi-coloured threads, seemingly hypnotised by their shifting patterns of gloaming-dye.

The younger Sentinel took a few paces away, keeping well-clear from the rattling artifice but taking the moment to peer more closely into the gloomier recesses of the loom-chamber. And yes, there they were, the ushabti themselves, working tirelessly to turn cranks and manipulate shuttles in endless servitude. Wrought from simple clay, but each bore the tender mark of Aleksandros' devotion – no base, unshaped mannequins these. Their glazed surfaces were carved with runes, and their faces shaped in strange, impassive expressions, mimicking the visages of exemplars and paragons past. Another of the stargazer's efforts to strengthen the virtue of his work.

Hastatus cleared his throat and Quintus hurried back to his tutor's side obediently.

“I have taught you of the simple, basic arts of spear and glaive, young man. I have taught you how to defend yourself with haft and edge; how to drive a foe back with measured thrusts; how to strike through metal and flesh to finish the struggle. But these... these are base measures of a warrior's worth. It is not enough to simply be able to kill a foe, because a true battle is itself a confluence of the Net of Heavens. A Sentinel must learn to read the weave and weft of the conflict around them, knowing when and where to step in and change the course of events with a single, wise strike.”

Hastatus turned to give his pupil a wry smile, then looked back up at the flowing tapestry of the loom's unending work. To Quintus' horror, the Sentinel flicked out his spear, its razor-tipped point dipping into the river of gloaming threads and severing one single strand.

The loom made a ghastly, slithering noise as the fault unwound, threads tangling or falling loose in a cascade of disaster. Wheels and slats came to a confused halt as the gloriously-carven ushabti ceased their efforts and then simply stood there, still and silent like tomb-statues of a dozen ancient exemplars.

Quintus gaped at the catastrophe, stuttering out his disbelief. “You... you can't do that! That's Aleksandros' life's work! He'll be... won't he be furious?”

But his tutor was still smiling that faint, mused smile. “It's the old man's challenge to me – find the key point and sever it. In doing so, I learn, and so does he. A Sentinel's training is never finished, and as for Aleksandros, he knows that his loom must withstand the same rigours that the Net of Heavens does every single day. He'll learn from this, rebuild and refine it. One day, no matter how many threads I cut, this loom will remake them in new patterns, and I will be able to carve a tapestry of my own design with just my spear and my mind. On that day, Aleksandros will have succeeded in replicating the Sentinel's art.”
Retrieved from "https://www.profounddecisions.co.uk/mediawiki-public/index.php?title=Terunael_Warlord&oldid=50225"