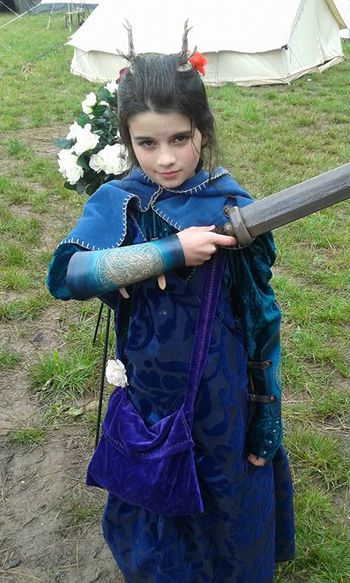 The people of Dawn suggested the Test of Citizenship as a way to ensure
new citizens were worthy of the benefits and responsibilities they recieve.

The Test of Citizenship is an Imperial test administered by members of the Academy. A child who passes the test becomes a full citizen of the Empire and confers on them all the benefits and responsibilities of such. It consists of a short spoken examination with the Chancellor of the Academy (or the Vice-Chancellor in their absence) to ensure that the young citizen has enough knowledge of their nation, the Empire and its laws and customs to make an effective citizen.

The test is designed to ensure that young role-players have sufficient confidence and understanding of the rules to begin role-playing more independently. Preparing and passing the test is intended to be an enjoyable challenge for young players attending events.

As with the Test of Arms, it is also an opportunity for us to make sure the parent or guardian is happy with their child becoming more involved in the game.

The Test is fairly informal and should not be a source of stress or nervousness. The Chancellor ask a variety of questions and based on the responses, judge whether the candidate is ready to become a citizen. There is no lower age limit, although most graduates are around 11 or older. The Test can be sat as many times as the candidate wishes and the Academy staff will always provide constructive feedback to help a candidate prepare for their next attempt.

A parent or guardian must confirm that they think their child is ready to take the test, and that they are happy for them to become a citizen if they are judged ready.

The test will usually involve some or all of the following questions. This is not an exhaustive list but covers the vast majority of the areas to be covered in the test:

The Test is normally conducted from 12pm on the Saturday and Sunday of an event, following the Academy's morning class. Tests outside of these times can be arranged if there is a large number of candidates to get through or if circumstances require it (e.g. if a candidate has already passed the Test of Arms and wishes to take the field the next day). Candidates and their parents are encouraged to discuss the Test with the Academy staff in preparation.

Once a candidate has passed the Test, they will receive the following benefits and responsibilities:

Out Of Character Benefits