The League culture and customs

There is a strong emphasis on rules in League society. They despise people who break the law, because they are seen as cheating and using unworthy mechanisms to take wealth and power from their more prosperous neighbours. The written rules are the Imperial Laws and breaking them is considered an act of utter desperation. To reduce an enemy to the point where they are caught breaking the law to try to keep their head above water is considered by many to be the ultimate defeat that you can inflict, the final mark of shame. Assassination, theft and murder only happen if a citizen of the League has no other card left to play, and in the knowledge that they have already lost.

The League has other rules besides Imperial laws, however. Manners are important; individuals are expected to remain polite even towards their hated enemies. While the League strives to be civil not servile, it is vital to display the respect due to those who have earned positions of importance in League society. A regard for punctuality is an element of this civility; if a party begins at sundown then you can expect to be turned away if you turn up an hour later. Breaking the general rules of civility and respect suggests you are the sort of person who cannot be trusted. If you cannot obey the small, simple rules how can you be expected to obey the important, complex ones?

"No friend ever served me, and no enemy ever wronged me, whom I have not repaid in full"

The Epitaph of Lucius Cornelius Sulla

For centuries the citizens of the League have engaged in ruthless competition with each other. Wealth serves as a basic way of working out who is "winning" but it is a metric that lacks finesse. Ultimately, the League deals in favours and influence. Favours are more valuable than gold, because they represent the ability to influence other people in a more direct fashion than money. In the same way, every guild keeps a count of those who have worked against their interests in the past, because such offences represent a debt that is still to be repaid. This system, called Dead Reckoning, can be bewildering to outsiders, assuming it is even visible to them.

Some citizens of the League keep a physical ledger in which their favours and debts are recorded, often in the form of a personal journal or small notebook that is kept on the person at all times. Guilds do much the same, recording obligations owed in ledger books. It is very useful to know who owes a favour to whom, or who considers themselves to be owed a debt, because carefully navigating the tricky waters of the League sea of favours and debts is a key element in success at politics between the cities. 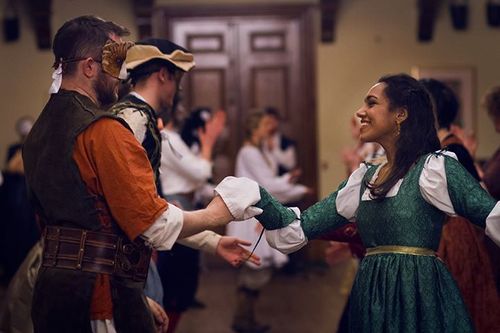 Host and guest work together to make a gathering a success.

“The best of everything” might as well be the League motto. Wealth exists partly to "keep score" but its true value lies in its ability to acquire the fruits of civilization: beautiful things, comfortable clothes, delicate jewelry and inspiring entertainment. While outsiders sometimes criticize the League for being a den of greed and miserliness, this is largely unsupported prejudice. Wealth, after all, achieves very little if it is simply stored in a vault.

The nation is a crossroads for trade in all kinds of luxury goods, and being able to set a fine table for close friends and allies is the mark of a solid citizen, regardless of social position. It is clear, however, that such a table is by invitation only; life in the League is busy, and unexpected guests are an unwanted distraction. People wait to be invited to dine; anyone arriving at a League table with an assumption of hospitality will receive short shrift. To ensure that everyone has a chance to see the depth of their hospitality, most individuals and guilds prefer to throw a lavish party, at most once a year, to which they invite everyone they know, friend and foe alike. Balls and feasts are common, with hosts competing to offer the most lavish entertainment and finest distractions. A party is a serious business in the League because it is an opportunity to demonstrate one's wealth and social cleverness.

Citizens of the League are meticulous in recording favours done and favours owed, but when they give a gift to someone it is free of any obligation, even the expectation that the gesture will be returned. Gifts are given by the rich and powerful as a way of demonstrating their social standing but the cleverness and appropriateness of the gift is much more vital. Gifts that display insight into a person's character, or allude to their situation are more impressive than mere wealth. Gifts to political opponents are common; they carry a mark of respect and appreciation. It is the mark of a true Merchant Prince that they are as gracious in defeat as in success. 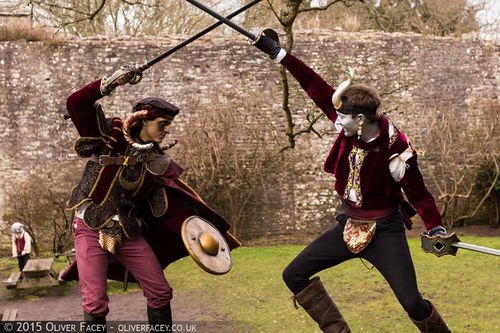 Even a duel between friends is deadly serious in the League.

One gift that is almost never offered casually, especially to a citizen of the League, is that of a ring. Rings have powerful connotations to League citizens, and offering a ring is tantamount to asking the recipient to swear loyalty to the giver.

Although duelling to the death is illegal, formal duelling is an accepted way of settling disputes. Challenges are usually publicized; bouts between well-known duellists can draw sizeable crowds, and particularly popular duellists may find themselves attracting a significant following. The terms of the duel are set by mutual agreement by the participants, but usually both parties will use matching weapons and fight until one party submits or is too wounded to continue. It is accepted practice for powerful and wealthy individuals to employ professional duellists to fight in their stead. It is common for a duel to be observed by a magistrate that no foul play occurs - indeed, many duellists consider the presence of a magistrate to be insurance of a sort; if an accident does take place, it is extremely useful to have as an eyewitness one of the people responsible for enforcing the law.

Performance and display are important parts of life in the League. From the signs over every shop and the street vendors hawking their wares, the rumbustious displays of bravado by the Free companies and the dramatic duels between rival theatre troupes, to the ostentatious parties of the Merchant Princes and the displays of wealth and power, everything is on show in the League. Those who want to get ahead need to show everyone why they should be taken seriously; those who have achieved success want everyone else to know it. 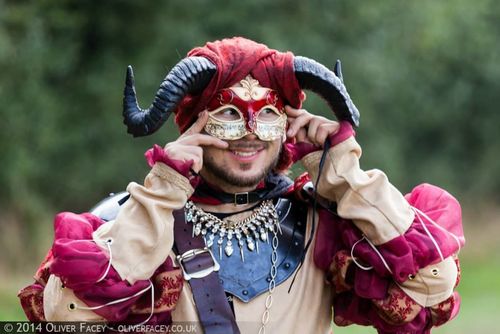 Image may be artificial, but it is a powerful tool.

Most people in the League implicitly understand the importance of image, even while they realize its artificiality. Nobody really imagines that the duels between rival actors are genuine, they understand that this is performance - indeed that is the very point of the exercise. The actors compete to be more brilliant and compelling and thereby win business for their troupe. The fights between bravos might result in broken bones, but their ultimate purpose is to demonstrate the capabilities of the Free Company they work for. The masks worn by the actors in the theatre are not real, but it is attendant on everyone to treat them as real, otherwise the play cannot proceed.

As cicisbeo Narante Garamul said in Theatre and Politics "Remember always that the stage lies before you, and the mask you wear is the part you play in it. Rather a virtuoso villain than a mediocre hero, better a subtle servant than a heavy-handed prince. Don’t be afraid to try on masks until you find the one that suits you best, but remember to change out of sight of the audience. Loved or hated, when the curtain finally falls for you, let them feel the world is a smaller place for your passing."

Marriage in The League is not only a matter of love or romance. By choosing to wed, two individuals are swearing an oath expressing a profound loyalty towards one another on par with the loyalty others feel for their guild, city or nation. A wedding may be a joyous occasion, but it is also a serious business. Many League citizens who choose to get married do so later in life, in early middle age, rather than in the first flush of youth. Weddings between the young, especially by those in love, are seen as ill-advised. 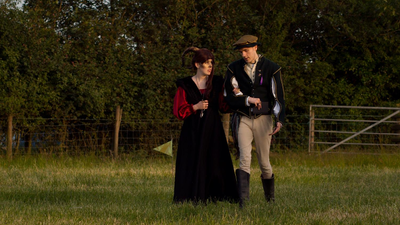 Romance has little to do with the serious political business of marriage.

It is entirely acceptable for lovers to live together, or raise children, without ever being wedded. These relationships may be as casual or committed as those involved are comfortable with. However, if someone is married there is an assumption of absolute fidelity - extramarital affairs are a serious business; they destroy the reputations of both the adulterer and their paramour. In a nation where trust is important, an affair is the ultimate expression of unreliability and treachery. The only exception is the cicisbeo (pronounced kick-a-BEY-o in Empire), a professional paramour sometimes hired by prosperous and well to do married citizens.

Committed lovers often wear rings to represent their connection to one another, and a wedding almost invariably involves the exchange of these rings. Powerful symbols of loyalty in The League rings can have a magical significance when exchanged in this manner.

The League obsession with keeping score extends past death. League wills are full of bequests to charitable institutions, endowments for public memorials and most of all extravagantly planned wakes. It is common to hire mourners and traditional for the deceased to attend their own wake, in the form of a single masked performer. Attendees at the wake are given free license to say things to the death masque that they would have liked to say to the deceased were they were alive.

It is common at a funeral in the League for someone trustworthy to be asked to play a death guiser. This person wears the clothes and mask of the deceased, so grieving friends and family may say a proper farewell or pass on any last words they never got the chance to say in life. The richest will also hire professional troupes to perform the highlights of their lives in theatre or music. True immortality is commissioning a play or song about your life to be performed long after you're dead. Of course, the writer may choose to subvert your memory cleverly if the actual truth doesn’t agree with the public image you wished them to portray. Immortality can be for good or ill, after all.

The majority of League citizens are cremated and their ashes cast into one of the of the four great rivers. The exception are those few souls whose virtue has gained them the signal honour of a place in the great Necropolis of Highguard, or those wealthy enough to be able to afford mausoleums or tombs. Cremation, after all, is quite cheap whereas securing and maintaining a tomb in or near one of the cities is an expensive proposition.

Each Winter Solstice, the League celebrates a particularly lavish festival with strong ties to their funerary traditions: the Masquerade of the Reaper.