The League look and feel

The League look and feel 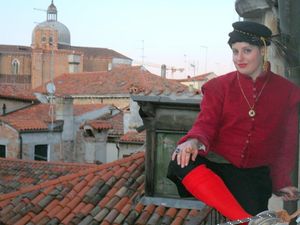 The League is urban. The influences come from the Italian city states, the Hanseatic

league, and Prague, as well as classic fantasy cities like Camorr from the Lies of Locke Lamora. Busy, but ordered, like clockwork. It has elements of Renaissance Venice, but (importantly) not just Venice. It is neither hovels nor a city of thieves and vagabonds nor the street urchins of old London.

The League is rich. Fine fabrics showing the wealth and style of merchant-princes. Rich silks in the south and fur trim for the northern cities of Temeswar and Holberg. It is opulent not ostentatious, a purposeful show of wealth and power.

Fine clothes on a citizen of the League allow them to strut a pleasing silhouette and are carefully designed to leave no doubt as to their abilities and skills. A gem encrusted hilt on a dagger that still needs to be drawn. They should be ready for a fight. Decoration and flourish intimately entangled with symbolism and a deep and genuine civic pride.

by rich oranges and deep blues and blacks. A dull or washed-out shade is an indication of poverty. Purple and black are considered colours of mourning when worn together; an unlucky combination that is to be avoided at other times.

Fashion is a rapidly changing force in the League cities. A citizen will display their status and wealth in the choice of trim or the quality of the cloth from which garments are cut – “What you wear is who you are.”

In Catzarria to the south, doublets of richly patterned silks are cut to flatter. Sleeves are full, and the effect is somewhat top-heavy, with trousers or breeches cut fitted to a slender leg. Slashing is the height of fashion, particularly amongst the military whose taste verges on the gaudy.

The northern cities are colder in climate, and clothing reflects that. More fur trim, more layers. Perhaps a long sleeveless gown of velvet over the fashionable doublet, which might be made of leather not silk.

Ladies who do not favour doublet-and-breeches wear elaborate high-waisted gowns. The neckline may be lower than in other nations, showing an undergown or kirtle, often of a contrastng colour. A fashionable lady of the northern cities will wear a long, full, gown, sleeved and high-waisted. To the south, the gown might be sleeveless, or with sleeves slashed like a doublet’s. Ribbons are often used as decoration.

Religious folk will wear long robes, and often a skull cap. To the south, the robes will be red, in the north – black.

The street bravo will be in leathers, perhaps with a heavier shoulder piece. The military will wear heavy armour on vital areas, particularly the head, but a full harness is rare.

Not common. Small metal bucklers are sometimes used. A main gauche or stilletto is usually favoured for the off-hand.

Crossbows for ranged combat. Sword and knife for the street fighter, blocks of long spears or halberds with flanks guarded by two-handed swords for the professional soldier.

The League flag is a red wolf on white above three rings. The meaning of the rings is a matter for debate - to some it represents the "core virtues" of the League, and to others it represents the "first loyalties" (Empire, City and Carta with the wolf representing the Nation). Citizens of the League love flags and emblems, especially ones that use riddles and puns encoded within the symbols. Every Cartahas a symbol of their own including the Free Companies, Churches and Troupes.

In the League, people wear rings to demonstrate their allegiances, wearing one ring for each major loyalty they owe. The giving of rings is an invitation to commit oneself to the givers’ allegiance, and the casting away of rings is a clear sign that an association is over. It is rare for members of Carta to wear matched rings, though that in itself would tell you something about them. Each ring worn by a citizen of the League has a story associated with it, and the rings often bear symbols or are made of materials that have a deep significance for the wearer or the target of the allegiance. Sharing the true story of a ring with someone – explaining the correspondences and symbols – is a sign of trust and confidence. More than a few openly wear rings that represent hidden allegiances. If you think you know who a citizen of the League is loyal to, but they are wearing more rings than you can trade loyalties, it may be that they have a hidden loyalty, or that they felt a loyalty to someone or something in the past (an ex-lover, for example, or the memory of a dead friend). Stealing rings is a dreadful insult – it implies an attempt to sever the target from their allegiances and loyalties. Citizens of the League expect to be buried with their rings, and robbing the rings of the dead is said to bring about a dreadful curse – there are plenty of folk tales of “cursed rings” taken from the dead.

The five ring piece shows a hand wearing five rings, and it is widely believed to represent the hand of Stratocanthus, the first Master of the Imperial Mint. According to legend his rings represented his loyalty to his Carta, the twin-city of Tassato, the Nation of the League, the Empire and, depending on who one listens to, his wife or his mistress. Only one of the rings was enchanted, and there is a lot of debate among historians as to which of the rings bore the enchantment, as Stratocanthus is known to have commented in an unguarded moment that it was “the most important one.”

The four rivers that empty into the Bay of Catazar are central characters in the art and folklore of the Nation. All the classic literature and theatre includes them in one form or another, whether as central characters or “clowns” during the interludes. A popular game between playwrights and critics is to conceal the characters in some way and challenge the critic to locate them.

Bravos are usually light armoured if at all. They usally wield a rapier, sometimes paired with a short parrying dagger like a main gauche. Many Bravos are part of a Free Company. 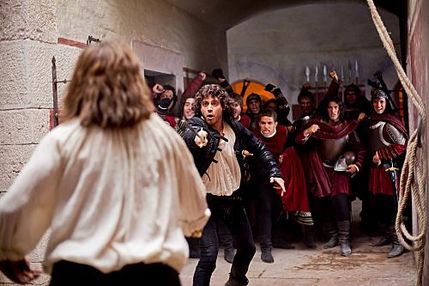 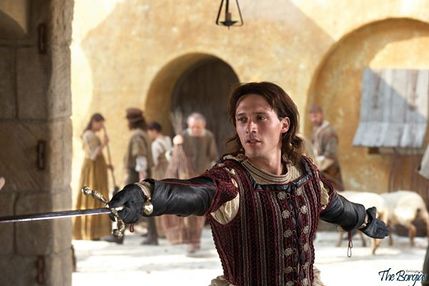 The riotously bright uniforms of the Free Companies mostly comprise two colours, with sleeves and trousers in the main colour, slashed to let the contrasting colour show through. A steel breastplate and helm provides the basic armour.

Despite their gaudy appearance, the members of a Free Company are professional soldiers well used to carrying all their campaign equipment on their back in handy pouches, packs and blanket rolls. 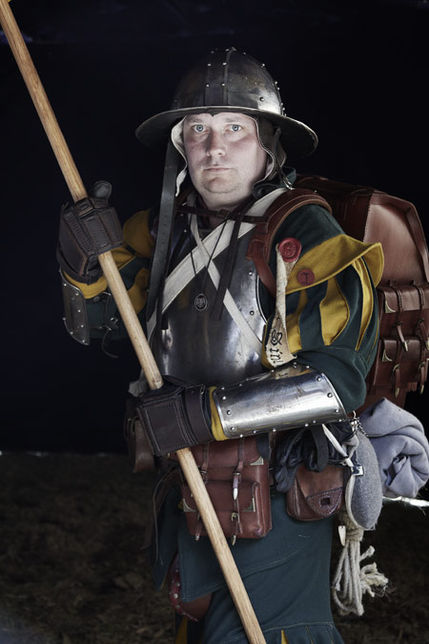 An iconic impressive banner makes a bold statement for any Free Company.

A starting Free Company may equip its members with a bright uniform in two contrasting colours and a quilted jack. Wealthier companies may have matching arming doublets, armour and helmets.

The Empire outlaws children taking the battlefield until they have passed their Citizenship tests, but some Free Companies include children of all ages. When employed as messengers, it is a matter of pride to dress them as well as the soldiers of the unit they represent.

The crossbow is extremely popular with the Free Companies, as well as halberds and pikes.

League costume is beautifully tailored with layers of complex cutting and decoration. The ladies’ gowns are high waisted with low necklines and complicated detailing such as puffed or slashed sleeves. 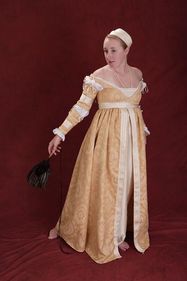 Gentlemen wear doublets with similarly complex decoration; sleeves are often laced on to the body of the doublet. The look is generally rather top heavy with slim fitting trousers and high legged boots. 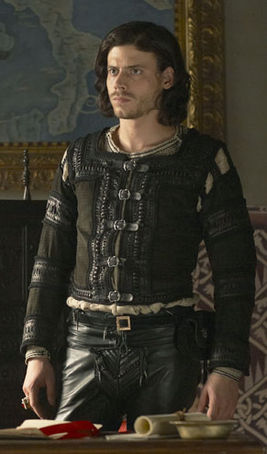 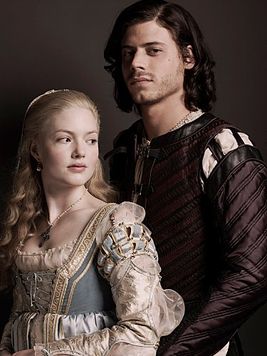 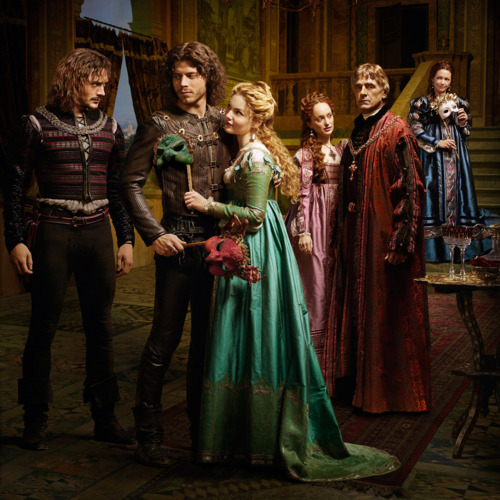 These stills are all taken from Neil Jordan’s “The Borgias”, the setting and period are perfect for Catazarria. 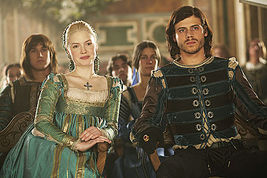 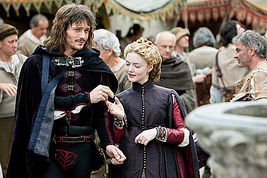 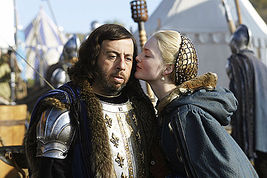 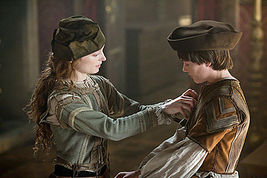 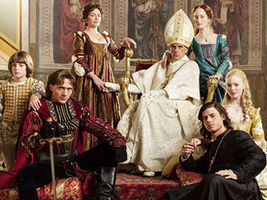 Costume in Holberg is less colourful than the southern cities. Materials are thicker and heavier.

Temeswar is further north still and the costume reflects that with the use of fur not just as trimming but as an integral part of the costume.

The tradition of masked theatre runs strong in League cities, where it is an important constituent of the magic of a performance.

Facemasks are a common element of fashionable attire for individuals from all walks of life. This custom sprang partly from the popular Facio style of masked theatre, where actors and even audience members swap characters as they swap masks, and partly descends from the traditions of cowls and veils in Highguard society. Masks allow an individual to cultivate anonymity and the air of mystery. Some groups – military units and criminals especially – may go so far as to all wear matching masks even in dangerous situations.

The heavily decorated robes of the League priests are in sharp contrast to some of the ascetics of other nations. Lavish embroidery, metallic threads and elaborate headdresses are all used to communicate their importance.