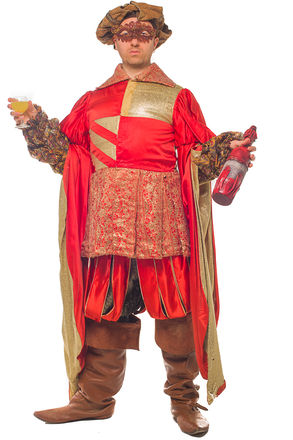 The dissolute rogue Scorrero from Hywel's Kind Hearts and Annulets

The mountebank is one of the personae used in dramaturgy. While the character is usually referred to as female, regardless of the gender of the thespian taking the role, within the narrative she may be of either gender; often, as with many dramaturgical characters, the gender is irrelvant to the story as a whole to allow any ritualist to take the role.

Character: In most traditional League troupes, the Mountebank is a charming and debonair rogue - a confidence trickster whose deceptions are eventually uncovered and who comes to a deservedly sticky end. Regardless of her cleverness, her sins are always revealed by the end of the play although she does not always pay for them.

The Mountebank is used in stories and magic that subverts and undermines expectations or accepted roles. She is smooth, charming and convinced of her own cleverness. Even characters like The Prince and The Bishop cannot help but like her, and she is often paired with either The Captain or The Witch in a romantic entanglement or sub-plot. Her antithesis is The Doctor, who is often the mechanism of the Mountebank's downfall.

She never acknowledges her own limitations, though can be quick to exploit the weaknesses of others. A merciless seductor and an inveterant rake, she remains a likeble rogue, even when committing the most deceitful acts.

There is a dark side to the Mountebank - she is wild and unconstrained. She says and does things that shock others, and she urges other characters to embrace riot and revellry when they should look to their duties and loyalties.

In street theatre, the Mountebank is a hero, a wily counterpart to The Captain who succeeds through his wits and his cleverness.

Magical Associations: She is most used in rituals that deal with transformation and deception, but she also works with magic that unleashes primal forces, grants strength or encourages destructive behaviour. She is associated with the virtues of Ambition and Courage.

Identities: As one of the personae, the mountebank usually appears named after one of the four rivers. Her name influences her character, which in turn influences the magical role she plays.

Trappings: She dresses flamboyantly in vivid and often contrasting colours, walks with a swagger and waves her hands dynamically. Her mask is often quite simple, but over the course of a performance she may wear other masks over the top of it to represent various disguises.

As with all personae, a troupe is likely to have a specific mask they use to portray the Mountebank..

Other Identities: She usually appears as either a mountebank or agitator. In Dawn she is sometimes a Troubadour. In The Marches she is often a Knight whose boorish manners and lusty behaviour get him into trouble. Occasionally a band of mummers will cast her as the Alderman, and then she is often portrayed as cheating people.

The Mountebank sometimes appears the guise of the gambler. A compulsive figure, the gambler has no sense of morality at all. He can happily bet ridiculous sums on the most trivial or insane things. However, he is very good at his profession, and seldom loses. He favours long wagers, that give the heroes time to either complete them or find payment. The Gambler has a macabre sense of humour, and usually wants something grisly, ironic or embarassing rather than money in return for a lost wager.

A generous spendthrift, the Sailor appears irregularly. He can't be relied on in the least, but he represents good times and trouble when he is in town. He often brings bequeathals or bounty, or signifies a short span of lavish entertainments. He also sometimes brings strange gifts, which are often more trouble than they are worth. The sailor is a blowhard and a braggart, and often starts trouble that he can't finish. He's also lusty, lazy, and given to taking more food and drink than is wise.

In this role the Mountebank often represents a fleet, or the primal bounty of rituals such as Rampant Growth.