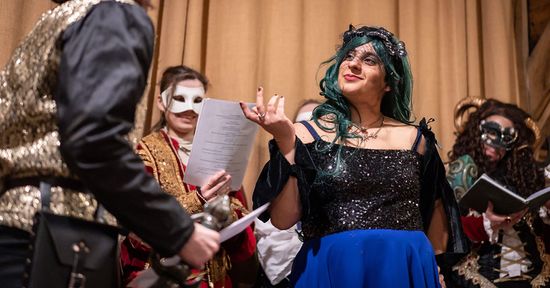 The witch is subtle, mysterious, manipulative, and wise.

The witch is one of the personae used in dramaturgy. While the character is usually referred to as female, regardless of the gender of the thespian taking the role, within the narrative she may be of either gender; often, as with many dramaturgical characters, the gender is irrelevant to the story as a whole to allow any ritualist to take the role.

She is rarely a negative character; she arranges romance, weddings and political alliances as well as causing the unwise and the foolish to betray themselves to each other and the audience. She often brings prosperity to those who heed her advice, and ruin to those who are churlish or impolite toward her.

In street theatre, she is often a lusty figure who represents pleasure and happiness, as well as mystery. In comedies the witch often represents a man or woman who indulges in the pleasures of the flesh, but who is wealthy and comfortable - sometimes a jovial parent or other family member of a more central protagonist.

Magical Associations: She is used in ritual where magic is used to influence, or where mystery is explored. She is also a common figure in healing rituals - she uses her secret wisdom to heal with herbs or with magic, or she renews the spirits of the other characters through music or by revealing things to them. She is associated with the virtues of Wisdom and Prosperity.

Realms: The witch is associated with autumn (manipulation,cleverness) and night (secrets, mystery).

Identities: As one of the personae, the witch usually appears named after one of the four rivers. Her name influences her character, which in turn influences the magical role she plays.

Trappings: Usually dressed in a robe or gown, she is often portrayed with a veil as part of her mask, usually covering her eyes and mouth, or with a cowl which hides her eyes. She speaks firmly, and is absolutely uncompromising in the pursuit of her goals. She often engages in clever word-play, or uses innuendo to say one thing while meaning another.

As with all personae, a troupe is likely to have a specific mask they use to portray the Witch. 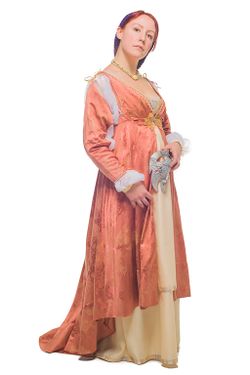 Other Identities: The witch appears as a courtesan, lover or cicisbeo; she may be an actor or actress, and is often a foreigner or other exotic character. She is a central character in Dawnish mystery plays, where she often represents a weaver. In The Marches and Wintermark she often represents slightly threatening forces; mysterious and enigmatic magic that might threaten a protagonist.

In the Brass Coast, especially among the corsairs, ideas of luck, fate and chance are sometimes personified as a whimsical man or woman often called "Fortune". Sometimes portrayed as the lover of Death, Fortune alternately embraces and flees from that grim figure. When Fortune is invoked to bring good luck. he is attentive and amorous; when used to brig bad luck or misfortune, he is tempestuous, jealous and cruel. Either way, he is characterised by mood swings - as a role, Fortune always reminds the audience and the other characters around him that he is unpredictable and always, eventually, turns on those who have hitherto enjoyed his favour.

The Seamstress or Queen of All Threads

Sometimes the Witch appears in the guise of the Seamstress, representing fate and fortune. She is always more than she appears. Often her part in the play begins with a main character making a wish - she might help them towards their heart's desires but her help always comes at a high cost. Her assistance typically revolves around small, seemingly innocuous actions (ie, you place a flower on a window sill, it distracts your lover's cruel father as he crosses the road, and he ends up falling under a cart and dying.)

An ambiguous figure, often shown in close-fitting blue clothes, the Shadow rarely reveals herself to the character she wishes to aid. Instead, she acts as an unseen and generally altruistic assistant, removing obstacles from his path and ensuring that he is in the right place at the right time. In some plays, she also appears as a family member or lover of the hero; in such stories, donning the Cloak signifies her transition from one identity to the other. Although her actions are generally to the hero's benefit, the Shadow's motivations are not generally clear, and in some Night rituals she can be the focus of a late twist in the story. She often represents external magical forces that are either wooed to assist the protagonist, or invoked to hinder an opponent.

The Spurned Lover is spiteful, vengeful and will stop at nothing to achieve revenge. She represents dark passions, and often the protagonist has done little to attract her attention. While she can be superficially charming and disguise her intentions beneath a mask of indifference or forgiveness, she always works against whichever of the Persona has spurned her, and whichever character has replaced her in her former lover's affections. She is an agent of curses and misfortune, and a key component of some magical curses. When she holds The Cup, its meaning often becomes 'poison' in either a literal or metaphoric sense.