Empire is a character-driven game - an open world that you are free to explore and influence.

This page is part of our introduction to Empire, explaining more about the game. It is intended for people who are new to live roleplaying as well as experienced live roleplayers who have never done Empire before to give you a sense of how Empire is designed and how it plays in practice.

Empire is a sandbox game in the sense that you will be entering a completely open world that you are free to explore and influence. There is no grand narrative being created by us, rather the Empire campaign consists of the stories that emerge from the interactions of the player-characters who collectively run the Empire. You are part of a game with thousands of participants all playing together at the same time. You work with - and often against - other player-characters to determine what happens next. In this sense we strive to make Empire like the real world; there is no predetermined outcome and you are free to make your own choices within the constraints of the setting.

At its heart Empire is a game of politics that is quite deliberately player versus player (PvP). That means that if you are going to be active in the politics of the Empire then the protagonists that you encounter along the way will be other players. The game is deliberately designed to encourage many different forms of political rivalry, and the expectation is that you'll find yourself looking for allies to help you as you try to find ways to advance your agendas and defeat your rivals.

Although Empire has a strong emphasis on PvP politics, the setting has been deliberately designed to discourage physical violence between characters. The setting is a very lawful one, with magistrates and militia who will investigate any murder and try to execute those responsible. The aim is to make assassination the last act of desperation that is the result of a long-simmering political rivalry, not the first choice in any conflict between characters.

The setting works hard to encourage and support a wide range of options for social interactions, offering many different ways in which you can harm your political rivals. For example, if they hold an Imperial title then you might try to get the Synod to revoke them or potentially even excommunicate them. You could arrange to have a rival magician declared sorcerers by the Imperial Conclave. You might fabricate or expose a scandal to undermine a Senator who is standing for reelection. Violence and murder are illegal in the Empire, but slander and blackmail are not. 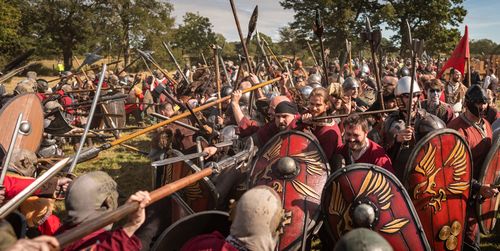 The ongoing military campaigns against the barbarian enemies that surround the Empire complement the politics. These battles are Player versus Monster (PvM). If your character chooses to take the field, then you will be facing off against five hundred plus hostile enemies who are "monsters" - volunteers who are playing a role just for that conflict, created and briefed by our team. They are there to give you a dramatic and difficult battle, where victory is possible but far from assured.

There are two big battles each weekend as well as many smaller quests and skirmishes. Taking part is completely optional - around half of our players do so each event. However, if you do take the field for a battle as your character, then you must volunteer to monster the other battle (we have to get our five hundred orcs from somewhere!). We strive to make monstering as enjoyable as possible, and we provide a mask and an armoured breastplate for our orcs, so if you're just starting out then all you need to monster is your basic costume and a weapon if you've got one.

Where the battles take place, who you are fighting and why, is decided by the generals and their advisors in the Military Council. Those decisions are strategic and political in nature - the Empire is surrounded by enemies and has limited forces at its disposal. The game is designed so that success on the battlefield at the event helps the Empire significantly in its ongoing wars, while defeat may give an advantage to the enemy.

Politics and battles are just part of the appeal of Empire for many players. A huge part of the game is focussed on the interactions between players which aren't directly political or confrontational. Empire has been designed to support as wide a range of character interactions which are broadly cooperative in nature. Beyond the cutthroat politics and the adrenaline of the battlefield, the Empire is a world you can live in.

Trade and commerce are an important part of the game, with many characters striving to make as much money as possible. There are many things to buy and sell, with a position in the Imperial Bourse as the ultimate prize - bringing prestige and wealth to those who can afford it. Characters can trade resources like mana, liao, and herbs as well as crafted goods such as potions and magic items. You might also use in-character money to buy a cake, a bottle of wine, or a piece of jewellery that players make and then sell as their character. Everything is on sale in Anvil!

Religion and magic are just as important as trade. In addition to being politically powerful, the Imperial Synod is the starting point for many religious and philosophical conversations as characters debate the Virtues and the teachings of the Way. Magicians meet in the Imperial Conclave to decide matters of magic but they also share knowledge and learning and seek assistance to perform the more powerful rituals.

Entertainment and culture provide yet more opportunities for players to interact with each other. You might attend a play at the League theatre, or join in the music and singing at the Navarr camp during Songs and Stories. Every nation has its own festivities and every event there are festivals and celebrations. Anvil comes alive at night with parties and singing, there is even a group called Senate Motions that takes over the Imperial Senate building on Saturday evenings to host and teach formal dancing.

Profound Decisions run four Empire events each year; each event is a political summit held at Anvil, the Imperial capital. Players portray the powerful figures of the Empire as they come together to make the crucial decisions that determine developments in the world for the next season. As much as possible, all the significant choices that affect the game world take place during the event.

Before each event we release the Winds of War and the Winds of Fortune as we update the recent history. These updates describe the consequences of all the actions taken at the previous event, along with any new developments created by our plot team. They represent common knowledge of is occurring in the world so you're free to choose how much of the details to read and have your character know - it can be fun to roleplay finding out the latest news from other characters at Anvil.

After each event, there is a period called downtime where we take all the decisions that have been made by the players and use them to determine what happens next. Then we update the game to reflect the changes the players have made - armies move and campaigns are fought, colleges of magic research new spells and characters generate income and items to use at their next event depending on their skills and resource.

Empire strives to be as immersive as possible - we want you to feel like you're actually in another world when you're at the events. To achieve that we need everyone who plays the game to have a shared understanding of the setting and a commitment to do their best to make it feel real. To help you get to know the world, the wiki provides detailed information on each of the ten playable nations, so that you can read up as much as you want for you character background. Everyone is encouraged to play characters that fit the setting, to have good costume and props, and discouraged from doing anything that would disrupt immersion. The more effort each person puts into making their character feel real, the better Empire becomes for everybody who takes part.

To help people get the right costume and kit there are look and feel guides for each nation. These are intended to give you a good sense of what the costume should look like. Getting a good costume can be an intimidating prospect especially as our photos often show off the best costumes on the field. The reality is that there are a wide range of different levels of costume on the field and all we ask is that everyone commits to be aspirational - to meet the minimum standards for the game but to aim to improve their costume over time to be the best that it can be. Our page on costume lays out our approach in more detail and is worth reading if you have any concerns in this area.

Empire is designed to be a game of difficult choices. Success is not guaranteed, and characters can fail simply because they didn't have the resources they needed to achieve their goals. Most situations that you encounter have no perfect outcome, someone always has to compromise.

It is possible to play a traditional hero in Empire, but it is a challenge. You aren't rewarded for your heroism by a sympathetic narrator. This is a deliberate design choice for the game - if the setting rewarded heroism the way a novel often does - then being heroic would be the easy option for everyone. Empire often rewards those that take the self-serving route precisely so that it is an achievement to play to a heroic ideal

Although the setting includes a number of fantastic elements, such as the ability to wield magic and the presence of supernatural creatures, the role of magic is subordinated to politics and character interactions. Morality in Empire is complex and nuanced, not a binary split between good and evil. The game is about the politics of the Empire, not about saving the world from some apocalyptic disaster.