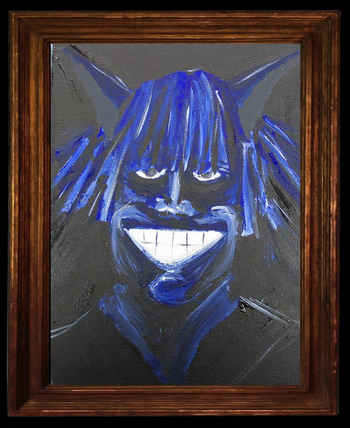 This is Andy Raff's page for doing things with links and the like. He can't believe he didn't think of it earlier.

I suggest you move along, there's nothing to see here :)

Oh! I do have a Patreon mind, which you can find here and a blog where I occasionally write about Empire stuff which is here.

Our rules cover our events. The baseline expectation is that sanctioned events operate to the same rules as PD events - because we think it's better if our players are not surprised if they attend such events. But organizers have used different rules at sanctioned events before now and very successfully (e.g. the hospital events).

So if an event organizer wanted to allow to retired characters then I'd expect them to discuss that with us during sanctioning. It's not something we'd always say no to - but we'd want to be happy with the way it was being dealt with - and be confident that they were aware of the potential for abuse at their event. In general I'd recommend against it for high-combat, high-threat events - but be less concerned for relaxed social events.

{{Mandate|mandate=Some text with exciting words and how much liao.|assembly=Varushkan National Assembly}}

{{SOP|statement=That all sword scholars unite under the banner of the disciples of the Tempest Jade Maiden to become an effective fighting force.|Assembly=Urizen National Assembly|when=Spring Equinox 382YE|by=Edmundo|vote=116 - 0 Greater Majority}}

<div style="float:right; width: 300px; clear: right;">{{CaptionedImage|file=WingedMessenger.png|caption=''Name'' (does something). A [[Call Winged Messenger|Winged Messenger]] can be sent to her at (address).|align=right|width=300}}</div>

As a regular spell, it takes ten seconds to cast detect magic on a target. You should make it very clear what the target is, by touching it or by waving or holding your hands over the target throughout. You may want to close your eyes, the better to focus your "magical sight", or examine the target from several angles. While many magicians perceive magical auras visually, you might want to roleplay that you perceive them using a different sense. You don't need to be a practitioner of the music of the spheres to "hear" magical auras as complex chords, for example. You might run your fingers over an item, or through the air above a character, "felling" the "shape" of the magic and speak in terms of a "texture" rather than a realm. A naga character in particular might enjoy demonstrating that lineage's discerning senses by "tasting" or "smelling" the aura in the air around the target (within the bounds of propriety, of course).

The use of a simple prop can make the casting of this easy spell especially memorable, especially when time is not of the essence. A Mystic might burn a herb or a stick of incense and inhale pungent smoke, while a Highborn magister might dab pure water on either eyelid or a League magician might study the target closely with a mirror to try and reveal it's true nature. Don't be afraid to interact with the target - turn the item over and over and study it carefully, or ask a character questions about how they feel or seemingly inconsequential details about their life.

It should be obvious you are casting a spell, and the easiest way to do this is through your spellcasting vocals. An easy way to do this is to vocalise what you are doing with phrases such as "Let my inner eye be opened," or "I seek answers from beyond the mundane world," or the like.

While the spell takes only ten seconds to cast, it can be very satisfying to continue the roleplaying even after the referee has delivered the result "uncovering" that information over the course of several seconds of revelation. Describing the spell in evocative terms - rather than simply describing it as a "magnitude such and such, of such and such realm" - can help make the experience of casting the spell more powerful. "This magic is warm, it's like it's alive, it almost has a heart beat - I think it is an enchantment drawn from the realm of Spring" or "This spear thirsts for blood, it's hungry, I think it wants to cut me ... I think it has the power to strike deadly, fatal blows but after it does so it's sated and has to sleep for an entire day" or "The tulpa of the spider seems to think that this ritual is Winter magic, and it's quite powerful - it's a little scared, to be honest with you ... and so am I."