The Ushka were the first human inhabitants of this land; their legends claim that they were born, fully formed, from the soil and the shadows beneath the trees. Their villages clustered together in the wilderness, prey for wolves and worse, but they had an understanding of the cruel realities of life in the forest. They made bargains with stronger powers and thus survived, although they often paid a steep price for their survival. 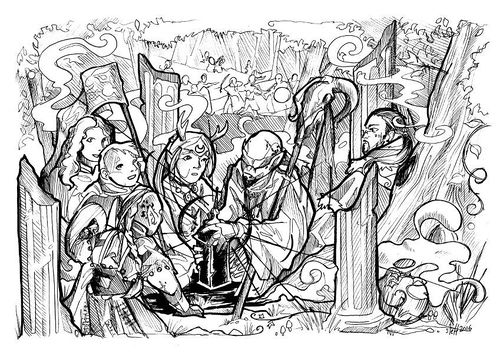 The Vard were cousins to the Steinr, warlike and fierce; they came to Varushka meaning to claim the riches of the land for themselves. When the Ushka encountered the Vard, at first they tried to hide. When hiding failed they tried to make bargains with the Vard. When this too failed, they tried to fight the Vard. When the steel axes and steel shirts of the Vard meant they could not be defeated, they bowed their heads and were conquered. Rather than destroy them, the Vard offered the Ushka a place at their hearth and protection from the shadows beneath the trees. In return the Ushka shared their hard-won wisdom and helped them to survive the dangers that could not be defeated with steel alone.

With the wisdom of the Ushka and the prowess of the Vard, their ancestors defeated or bound many of the monstrous threats that lurked in the wilds. They spread slowly over the land, working together, until eventually the Vard and the Ushka were both gone, and in their place were the Varushkan people who partook of the strengths of both.

Not all the Ushka are gone, however. Early records say that many of the Ushka were assimilated but that the greatest of their sorcerers – who called themselves the “bargainers” – refused to bow their heads. When it became clear the Ushka were outmatched, these bargainers made terrible compacts with the Eternals of the Wasteland, the place Imperial scholars call the Realm of Winter. In return for dreadful sacrifices – and with the promise of more to come – these Volodny hid their hearts outside their bodies, becoming to all intents and purposes immortal. Kept alive by their hatred, and possessed of terrible hungers, they vowed collective vengeance against the Vard and those Ushka they now saw as collaborators.

In the time of the first Empress, the Volodny created a terrible champion, Alderei the Fair, who sought to conquer Varushka with the aid of their sorceries. In desperation, the Wise Ones convinced those Boyars who opposed Alderei to turn to the nascent Empire for help. Faced with few choices, many Boyars agreed to become part of the Empire, in return for aid against Alderei. With the strength of the Imperial forces, they were finally able to defeat the Volodny pawn.

Even while the war still raged, the foundations for the Empire were being laid. The nations had agreed to a set of laws and seemed confident that they could be enforced but the cautious Varushkans thought otherwise. They argued that the powerful of each nation could not be trusted to collect the taxes and enforce the law with an even hand. They would find themselves constantly torn by their allegiances to their countryfolk.

This caused outrage, but the Varushkans were adamant, and insisted that the Empire needed dedicated civil servants and judges, whose loyalty was to the Empire only and whose probity was above reproach. In the end each nation agreed to put forward a dozen individuals of good standing. The Imperial Civil Service was created and powerful enchantments were woven to ensure that the Magistrates and other civil servants would be loyal to the Empire and no other cause.