This touch of the other also draws the attention of the volhov. Many volhov are lineaged or were taught their magic by a lineaged master. When people are troubled by Eternals or their heralds, the volhov know that people with lineage will have an advantage dealing with creatures who share their supernatural roots. If a vale is having trouble with a Summer Eternal, many volhov would rather have the assistance of a naive changeling cook than a schlacta without lineage. 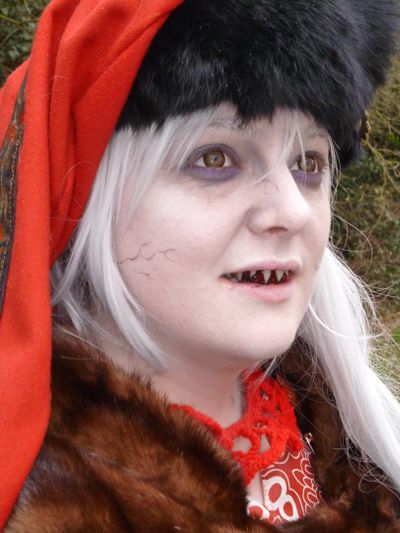 Costume by Anna Tait, Mathew Tait and Tansy Pye, Make-up by Tansy Pye
Stories claim that the draughir lineage began in Varushka in a valley beset by terrible famine. A boyar made a deal with a powerful Winter Eternal to save her people but in the process they were transformed into monsters who feasted on rotten meat and the flesh of the dead. Traditionally the Varushkans have a great deal of respect for the pragmatic instincts of the draughir and for their ability to survive, while simultaneously keeping a close eye on them in case their monstrous appetites overwhelm them.

The briar lineage is accepted in Varushka, but its members are not entirely trusted. There is a common prejudice that the willful nature of the briar lineage makes it difficult to follow the rules, and that a briar left to their own devices in a dangerous situation will simply end up harming themselves and others. They are treated as if they are a little slow - and few briars can tolerate this attitude for long.

The Company of the White Stag is an unpopular changeling fellowship of wardens who concentrate on fighting monsters. Their confidence drives them to take their lives in their hands and risk trying to destroy these creatures wherever they can, taking risks far beyond what their peers consider good sense. Many Varushkans consider these changelings to be a liability – their recklessness and refusal to abide by the rules is a disaster waiting to happen and they are considered anathema and cast out by most other wardens.

The rivers of Varushka are often used to transport raw materials for trade. Some vales along the banks of the most commonly travelled rivers are dominated by clannish merrow boyars who are known for charging hefty tolls for all boats that pass through their territories. Called vodyanoi, the people of these merrow-dominated settlements are seen as grasping and miserly. The common vodyanoi claim is that without the hard work of their schlacta, the rivers would quickly become impassable. They are also accused of various underhand economic practices such as dumping rubble into rivers to prevent trade bypassing them. Calling a merrow a vodyanoi is often an insult.