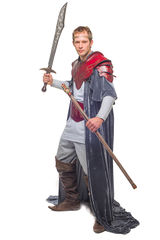 The Wolves circled her, the wall that was a road was out pf sight now. The creeping darkness of the forest . She had been tracking them for days, and nights, without sleep. She could smell the putrid breath of the ghouls, they hissed.

Maybe three of them.

She crouched in the glade, undergrowth knotted about her feet. She was wounded, a gash in the side from a bone sharp branch. The Wolves could smell the metallic tang of blood in the air. They made a guttural noise in their throats. She tensed.

The first two charged, she called forth words of power, her Antlers flashed, their tangs finding homes in the ribs of the monsters. One ran wheeling back into the woods at the clash of magic from her rod as her mana personal flared outwards, the second falling instantly to the rend of the axe the magic she crafted into the Dragonbone providing all the strength she needed. She'd hardly worked up a sweat. The remaining couple came crashing and snarling out of the gloomy brush.

Two-on-one, now those were better odds.