The orcs and the humans stood a little distance apart, facing each other.

The Navarr woman had her arms crossed, her face blank. At her side, the armoured brand held herself ready, the butt of her spear resting on the ground - but none of her weight on it. She was ready to fight.

Tension was evident in the posture, and in the faces, of both the orcs who faced them. Both orcs bore the marks of the shaman, a pale contrast to the red paint on the women who stood opposite them.

"This is out second meeting," said the elder orc, after a few moments of silence.

The Navarr brand inclined her head but said nothing. Her thorn companion peered past the two shaman to the group a few dozen yards away, narrowed her eyes, touched the brand's arm.

"There are humans among you already," said the brand, her tone neutral. "Are they slaves?"

The younger orc shaman snorted. "We keep no slaves." he said. "The Druj keep slaves. We are not Druj."

It was the older orc's turn to reach out to his companion, touch his arm, without taking his eyes off the brand before him.

"They are our companions. It is something we can discuss later." The elder shaman leaned a little heavily on his staff, favouring one leg.

"You're injured." said the brand. The orc shifted his head slightly, closed his eyes for a moment and opened them.

"An Imperial arrow." said the younger orc. He kept his voice steady, mimicking the elder, but a quiver ran through his body at the effort. His eyes became a little distant. The Navarr brand tensed, ready to strike at the first sign of hostile movement from the orc across from him, buying time for the brand to escape at the cost of her own life.

"I'm sorry to hear that." said the brand.

"I was sorry to feel it," said the shaman. He barked a laugh suddenly. "But I am thankful that the arrow was clean, and the metal neither barbed nor hooked, and the wood not cursed. The wound festered, but that is the cost of war beneath the aegis of the Sick Ones. Your Senate is untrustworthy, but the Ancestors know, you are the lesser evil."

A little of the tension drained out of the brand, and the orcs. The thorn remained at the ready.

"We should find a place to sit," said the brand, decisively. "How many are you?"

The two orcs exchanged a wordless look, and then the younger one said cautiously "There are eight-score score of us here. There are more back at our camp."

The brand did a quick calculation and if she was surprised she did not show it. So, a little over three thousand orcs of the Peytaht tribe then?"

The younger orc nodded, but the older one shook his head.

"No, we will not use that name here. Peytaht is the heart of that which was. We have left our hearts behind, with it, with the spirits. For now, we are the tribe of the Great Forest, in memory of that time when all the lands were covered by tree and leaf from one edge of the world to the other."

As he spoke, his eyes were distant and there was ... a resonance? A suggestion of something else speaking alongside him, or through him, perhaps. He shook himself, sending droplets of water and sweat from his fur mantle in all directions.

"For now, I thank you. Let us find somewhere to sit. My son will make a brew of herbs and we will discuss the invitation that has brought us here. There is news that your people ... well, it is not good news but you must hear it."

"We will hear your news," said the brand. "And then we must discuss what we are to do with you."

The younger shaman opened his mouth, but before he could speak the older shaman, with an enigmatic smile, spoke first.

"Ah, perhaps that would be an interesting conversation. But let us have a different conversation instead. Let us talk about what we are to do with each other."

During the Summer Solstice, the Imperial Senate declared that the orcs of the Great Forest of Peytaht were foreigners - that the Empire was no longer at war with them. A little over a month later, an army of around two thousand orcs, along with what appears to be the majority of their tribe, emerged from Hope's Rest into the Tarn Valley, at the invitation of the Senator for Therunin, Caerwyn Summercrow.

The orcs are weary, and their numbers are much depleted from several seasons of fighting Imperial forces in and around Dawnguard, but they are armed, and armoured, and alert for signs of treachery. They are met by representatives of the steadings and stridings of Therunnin, and a great camp is raised in the Lower Tarn Valley.

The Great Forest orcs represent a number of challenges to the Empire, if the Navarr intend to continue offering them asylum in Therunin. 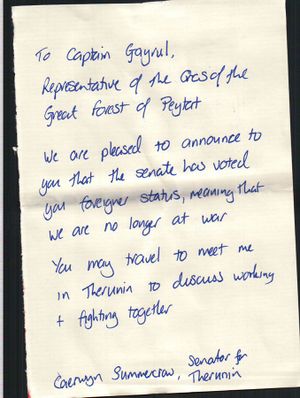 The Great Forest orcs are lead by a chief, advised by a council. The current chief is relatively young, but their council is made up of old and experienced orcs. They have been quick to make clear that they intend to maintain their own cultural identity - they have no interest in being absorbed by either the Navarr, or the Imperial orcs.

The orcs of the Great Forest have their own faith, and have so far politely - but firmly - rebuffed attempts by Therunin guides to engage them in religious discussion. They are disinterested in the Way, and likewise not interested in talking about their faith with outsiders while their status is still somewhat unclear. At this time, there is no opportunity for the Imperial Synod to send effective missionaries among the Great Forest orc tribe.

The Tribe of the Great Forest have an army of two thousand armed orcs, along with a number of soldiers injured fighting the Empire. They represent a standard campaign army under the command of a warchief (a rank analogous to an Imperial general). The warchief answers to the chief and their council - who set the policy of the tribe - but is free to act as they see fit in pursuit of the goals the leaders of the tribe set forth.

This army requires support. It can continue to support itself at its current strength until the start of the Winter Solstice, after which it will either need to find an alternate means of support or begin to disband. Supporting this army requires 50 Thrones each season. As with the previous arrangement with the orcs of the Hierro clan in Segura, the Imperial Senate may choose to pass a motion agreeing to support the army.

The orcs also wish to rearm and restore their fighting strength. The tribe contains the remnants of a not insignificant military force an army of strong orc warriors experienced in fighting to defend difficult, dangerous terrain. While they are in Imperial territory, however, they cannot resupply themselves naturally (but see below)

The Senate could instruct the civil service to provide them with weirwood or mithril in the same way they might perform emergency resupply for a Imperial army. The Quartermaster General of the Imperial Armies cannot perform this function, as their title only allows them to resupply Imperial armies - although the Senate could choose to expand the remit of the Quartermaster if they wished to do so with an appopriately worded motion.

Alternatively, any citizen could provide the orcs of the Great Forest tribe with weirwood or mithril with which to resupply themselves. This would be entirely legal, unless the Senate chose to abrogate the decision to treat them as foreigners, and mark them as barbarians once again, in which case providing them any assistance would be treason.

The warchief has already made clear that for the moment the army will focus on protecting its tribe and, while it would fight alongside the Navarr in defence of the territory in the event of a Druj invasion of Therunin, the orcs are not prepared to commit to any other military action at this time.

For the moment, no Imperial citizen can support the orcs of the Great Forest with personal forces, and even were the orcs to permit such an action those soldiers would not be eligible for the guerdon unless the Empire specifically extended it to include them.

A place to live

The Great Forest orcs have brought many supplies and possessions with them, but they have a number of needs that cannot be met without the opportunity to create a permanent settlement. They are interested in negotiating the details of their presence in Therunin, but one of the things they are already asking is for a region of the forest where their tribal laws hold sway rather than the law of the Empire. Specifically, they are asking that the Empire cede control of one of the three northern regions of Therunin to their control - specifically Upper Tarn Valley, Lower Tarn Valley, or Eastring.

While this region would be the centre of their habitation, they would not force any Navarr to leave the area - provided they were comfortable living alongside the Great Forest orcs, not interfere with the customs and traditions of the Great Forest, and respect their right to ignore "the Imperial ancestors".

Ceding a region to the Great Forest orcs would also allow them to engage in natural resupply in an otherwise Imperial territory. The orcs would not be restricted to this region - they have already expressed cautious interest in trading with the Navarr of Therunin at the very least - but it would provide a solid hub around which they could focus their settlements.

Even with the presence of the Vallorn in Sweetglades and Greenheart, this would still leave the Navarr (and thus the Empire) in control of four of the seven regions of Therunin, but if they lost even one more region then they would lose control of the territory.

There are eyewitness reports that as well as orcs, the Great Forest tribe is accompanied by an unknown number of humans of obvious briar lineage who are not Imperial citizens. There is a good deal of speculation that these briars may be representatives of the anarchists of Dourfell Keep in the Barrens - descendants of the murderous heretics who attempted to claim the Barrens as an independent briar "kindgom" built on heretical principles.

If these are representatives of that group, their legal status is slightly unclear. They are not orcs of the Barrens, so the Empire has not declared war on them. The Imperial Synod has not condemned them as heretics - possibly because nobody in the Empire has had any real, official interaction with them at all. The Great Forest orcs have so far refused to answer questions about these briars, and have given no indication as to who they are or where they have come from, nor how many there are.

The Great Forest orcs have prepared a small delegation to visit Anvil and speak to the Navarr, which is expected to arrive at some point on Saturday afternoon. They seem to have little interest in the Senate - whenever the matter is brought up, the orcs mention the failed peace treaty of Summer 379YE.

Caerwyn Summer Crow provided the Great Forest orcs with 50 Thrones to help them supply themselves, but they are still living in makeshift camps in the Lower Tarn Valley. Their situation is not yet desperate, but they are keen to see a resolution to their request for land to call their own.