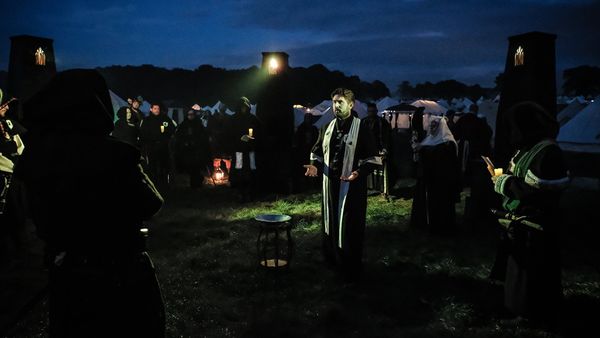 If you plan to perform this ritual, you will need to let the main referee desk in GOD know at least two hours in advance, or longer if we need to track the player of a dead character down ourselves. If we are unable to obtain the phys-rep, or they do not wish to be summoned, one of the other outcomes will occur. If we are able to obtain the phys-rep then the first option will usually occur.

Fire and light often play a key role, serving as a beacon for the dead spirit to 'find the way' back to the mortal realm. Similarly, some ritualists like to have things that belonged to the target in life, or people important to them. Imperial orc shamans ideally want to have someone from the same legion, while Freeborn ritualists prefer the presence of someone of the same family, especially a child or parent. Likewise, many Navarr include small amounts of blood in this ritual, the smell of which help attract the attention of the spirit and remind it of its life; Marcher spirits might include an offering of food or drink, an action that leads to the ritual sometimes being referred to as The Feast for the Dead.

It is important to realise that the ritual is not technically complete when the spirit appears. Many ritualists consider it to be only half-way through at this point. The spirit must still be addressed, and agreeing in advance how this will happen can save time and prevent confusion. Some ritualists include an hourglass to track the amount of time available before the spirit must depart.