The Suaq, Steinr and Kallavesi each had their own magical heritage long before they joined to create the nation of Wintermark. Although they have shared magical knowledge extensively since then, these approaches are as much an extension of the traditional beliefs and attitudes of the three people as they are to any particular magical skills. There are Suaq runesmiths or Steinr icewalkers for example, but they are uncommon. For the most part the three people have maintained their magical traditions along with their cultural heritage. 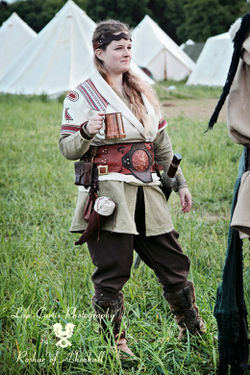 Runes represent primal power and are evoked everywhere
from the wall of a castle to a loaf of bread.

All crafting is magical to some degree, but the Steinr make the ancient magic of their runes an integral part of all craftsmanship. Whether or not the runes are visibly etched into the finished item, you can be certain the proper symbols were painstakingly inscribed during every stage of the construction. Runes represent primal powers and are used not just in metal and stonework but everywhere from a set of clothes, to a banner, to a loaf of bread.

The Steinr see magic as a potent weapon, every bit as deadly as an axe or a sword. Runesmiths who learn battle magic can make formidable combatants or powerful healers; they use the runes to enact immediate magical effects. The original runesmiths developed their strength working the anvil, but as they gained a reputation for daring in battle, more Steinr magicians began to emulate them. They prize boldness and vigour, and may be as comfortable in the thick of melee as any warrior. Many runesmiths wield a heavy oak staff or rod carved with runes when fighting, and like to spar with other runesmiths or warriors through unarmed combat, pugilism and wrestling.

Some runesmiths focus their attention on the mastery of the rituals, often of the Summer Realm. These runesmiths use their runes to mark out their allies and grant them strength and protection. Others prefer to concentrate on Autumn rituals, feeling an affinity for the magics of skill and wealth. 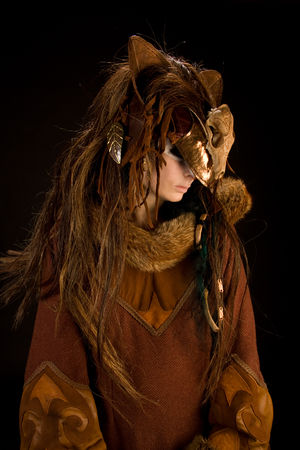 The Suaq see magic as a practical tool, a key to open doors, a way to solve problems indirectly. The Suaq call those magicians who are thought to show wits and cleverness icewalkers - a title that confers a degree of respect and admiration beyond the ability to simply perform magic. Icewalkers strive to embody the best values of the Suaq people; erudite, pragmatic and shrewd.

Icewalkers favour using ritual magic of the Day Realm to perform divinatory and scrying rituals to help find their quarry. Suaq magicians are widely known for their clever negotiations with eternals, trying to use their wits and glib tongues to negotiate bargains that favour the icewalker and their people more than they favour the eternals. Outwitting a powerful creature of another Realm is sometimes seen as the pinnacle of heroism for an icewalker.

Ritual magic for the icewalkers often involves invoking natural things or creatures, and drawing parallels between them and the target of their magic. For example, an icewalker who wishes to divine an area might create a parallel between themself and a high-flying eagle, while one who wishes to grant their comrades great strength might compare them to a flood, storm, earthquake or herd of wild boar. They often cement this magical simile by painting or carving an appropriate rune onto the target or a piece of their equipment.

Icewalkers sometimes extend this practice as part of the magical tradition of totem magic - specifically the use of spirit animals.

The Kallavesi see magic as a means to insight and wisdom. The enigmatic Kallavesi approach to life leads many of their heroes to become skilled magicians, of which the most famous are mystics. As well as magic, the mystics study the skeins, the idea that there are fated paths down which individuals travel. At critical points in life there are choices to be made, moments when your skein can shift, for better or worse, as a result of your decision. A mixture of magic, wisdom and divinatory arts are used to allow a mystic to determine the most auspicious choices to make. 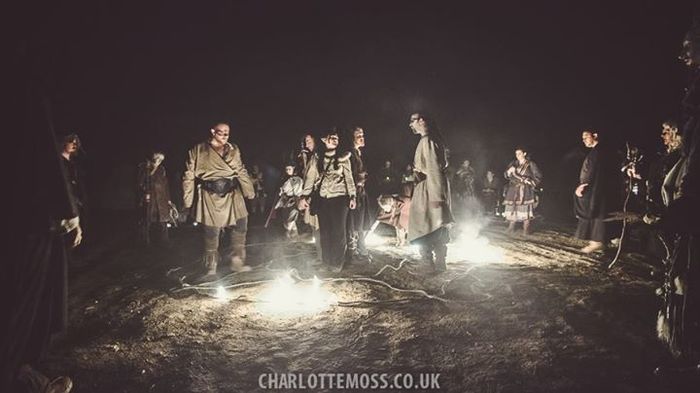 The Saker coven of Kallavesi performing a ritual

In Sermersuaq, the most northern point of the Empire, lies Sydanjaa, the never-ending ice-storm, sometimes called the Heart of Ice. This vast blizzard is a great mystery, blowing night and day across the tundra without respite. Beasts emerge from Sydanjaa that possess magical powers and their bodies often provide magical components. One of the most important are the great ice golems known as Artok. These creatures emerge from the storm to tread fixed paths before they head back into the ice. They can be tamed for a time by carving them with runes, during which time they are potent weapons of war if they can be controlled. Unfortunately they are difficult to take south, as they need the cold to function for long.