Wintermark remains sparsely populated and the only large town is the former capital at Kalpaheim in Hahnmark. The majority of Winterfolk live in one of the many small settlements, called halls, that dot the land. Each hall is led by a Thane, and although Imperial justice is now dispensed by trained magistrates, the Thane continues to settle disputes that lie outside the law and to provide civic and military leadership.

Traditionally the Kallavesi chose the Wintermark monarch, although they never chose one of their own. This tradition is reflected in many halls, with the Winterfolk looking to the wise and prophetic Kallavesi to choose the most able candidate from amongst the Suaq and the Steinr. There are halls with Kallavesi Thanes, but these are usually the exception and occur when the majority of the inhabitants of the hall are Kallavesi. 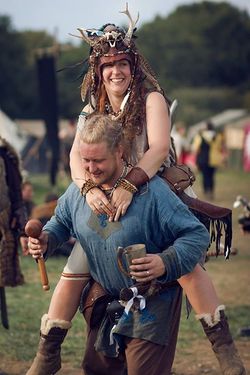 The Witan is a time for finding husbands and wives.
The Winterfolk prefer strong, decisive leaders who make bold decisions and stick with them. They have little time for people who vacillate or prevaricate. When the Kallavesi believe that a powerful martial leader is needed they tend to pick a Steinr Thane, if they feel the situation calls for a clever shrewd leader they choose a Suaq. In either case they make an effort to ensure they pick a Thane who the hall can unite behind, the people of Wintermark have little interest in strained loyalties and internal disagreement.

The forerunner of the Senate was the Witan, a grand moot held at Kalpaheim. Here the representatives of each hall met to discuss the business of the nation with the monarch. Today it is a festive gathering; those who involve themselves in national and Imperial business gather to eat, drink and plan for the year ahead. It is also a time for finding husbands and wives, for seeking out mentors or apprentices, resolving internal conflicts and generally keeping the nation of Wintermark functioning as a strong, healthy whole.

The symbol of Wintermark is three interlocking rings, representing the belief that the nation is stronger for the influence and inclusion of all three traditions. To preserve this heritage the Winterfolk ensure that they pick a single Senator who follows each tradition. The Steinr select the senator for Hahnmark, the Suaq select the senator for Sermersuaq and the Kallavesi the senator for Kallavesa. With Skarsind, the traditions rotated who selected the senator. For example at the Spring Equinox 379YE it was the turn of the Kallavesa and in 380YE it would have been the turn of the Steinr.

For each territory, every candidate who wishes to be considered sets out a jar bearing their name. Any Winterfolk of the appropriate tradition who wishes to express support may drop a single coin into one or more of the jars over the next hour. The face value of the coins is irrelevant, but by tradition, wealthy or earnest supporters will try to outdo each other by adding a more valuable coin. At the end of the hour, the jar containing the most coins bears the name of the new Senator. The money is given to the stormcrows to be distributed amongst the poorest Winterfolk present.

Although the senators are chosen by followers of a single tradition, in theory it is possible for any of the Winterfolk to stand as a candidate for any territory. In practice it is rare for the Steinr not to choose one of their own, and likewise for the Suaq and the Kallavesi.

The current senators of Wintermark are listed below - see the individual territory pages for a full election history for each position.

A list of well-known Wintermark halls who have attended Anvil in recent years can be found here.