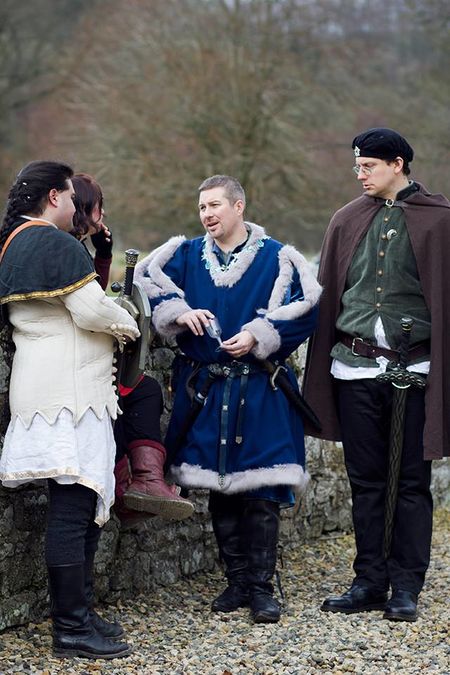 Advocates advise and support nobles in their political endeavours.

Advocates are professional yeomen who make a study of the history of the Empire and the structure of the Imperial offices, with an eye towards supporting noble senators. They may occasionally be called on to brief generals or other nobles on behalf of the senators, but for the most part they focus on making sure that Dawn gains political capital - and expends it as wisely as possible.

If you are new to the game, it is worth considering playing a novice advocate who is looking to learn your trade. Until you have some experience of how the senate works, you are unlikely to be able to convincingly portray a highly experienced advocate, no matter how much you study the content of the wiki. It is always tempting to want to create the most brilliant advocate Dawn has ever seen, but ultimately your character's ability as an advocate will be determined solely by your skills playing them. An eager and helpful advocate who openly admits to being inexperienced is going to get called on to help more than a character that claims to know everything but whose advice reveals their lack of experience.

This is a character choice that will allow you to explore some of the themes of being a civil servant without actually being an NPC. A lot will rely on roleplaying, but you should never be afraid to approach a civil servant and ask for clarification on a point of law or procedure - liaising with the civil service can be a source of fun in itself.

Playing an advocate is a little like playing a personal assistant or secretary. Rather than restricting yourself to being an assistant to only one noble, however, there is a lot more fun to be had making yourself indispensable to all the Dawnish senators. There is a lot of opportunity for roleplaying interactions both within Dawn and with your opposite numbers in other nations.

As an advocate you are ultimately responsible to the nation you serve and the senators who take your advice. There may be opportunities to turn situations to your own advantage as an advocate, but the most popular and active advocates will be those who give effective and impartial advice.

Although advocates exist to advise the Dawnish senators, don't assume that the Senate is the only place you can get your work done. It is a poor advocate who helps their senators pass their bill only to see it vetoed by the Synod. The more you understand of the Empire, how it runs and who runs it, the more effective an advocate you will be.

Advocates have no official power in Dawn or the Empire, so you won't have any additional resources to call on. If you are able to demonstrate your effectiveness as an advocate, either individually or by working together with the other advocates then it may be worth pressing the Dawnish senators to provide a purse of money for the advocate's benefit. Everyone knows politics is dirty work and coin helps lubricate the wheels of power - but many Dawnish senators disdain money and are openly contemptuous of bribery. As nobles it's their responsibility to strive to be as glorious as possible, so someone else is going to have to make sure that Dawn wins those essential Senate votes...