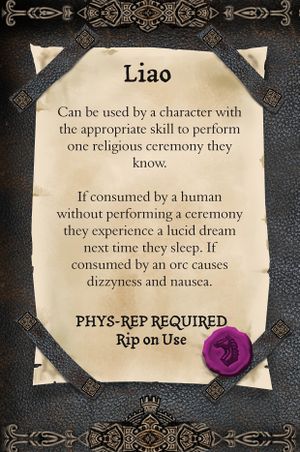 Liao is a purple powder that is used in ceremonial rites performed by Imperial priests.

Liao is made from vinum. Vinum is a white sap that was discovered by the Navarr to form a chewable confection that aids with deep, restful and dreamless sleep; and was often used to treat nightmares and night terrors. Refining vium to produce liao is a costly and time-consuming process. In the Empire, the civil service purchases large amounts of vinum, and processes it to create liao which is then provided to everyone who ministers to a congregation personal resource. Thanks to centuries of experience and improvement the civil service are able to produce liao quite efficiently for a fraction of the cost that any individual could make it.

To use liao to perform a ceremony, it can be:

An appropriate phys-rep for liao is a small bottle or vial, such as might be used to hold a dose of liquid or powder.

Consuming liao without the use of a ceremony causes a human to experience vivid, striking dreams the next time they sleep. An orc who consumes a dose of liao merely becomes dizzy and unwell, and often throws up shortly afterwards.

During the maturing process that turns vinum into liao, around one dose in ten thousand matures to a radiant purple. This has come to be known as true liao, or Imperial liao. True liao is extremely rare, powerful, and valuable.

The amount of pure liao produced each season varies. The Throne is given the first portion. The second portion is given to the citizen who demonstrates their Prosperity by pledging the greatest value gift to the Synod; this usually means that it is auctioned to the highest bidder and the winning bid contributed to the Virtue Fund. Any additional portions are provided by the Civil Service to the Imperial Synod to be allocated by gatekeepers.

The most common use for true liao is to provide a human being with a special vision of another time and place, which is held to be their past life. True liao can also be used in place of ceremonial liao to significantly empower the effect of a religious skill.