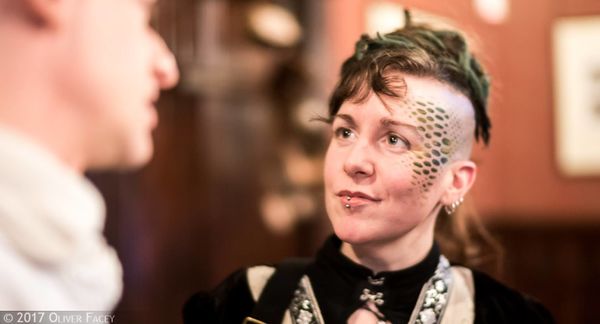 The seven gatekeepers often work closely with the cardinal of their virtue assembly.

Each of the seven cardinals of virtue appoints a single gatekeeper. Although there is no formal relationship between the cardinal and their gatekeeper, they often work closely together sharing the burdens of providing leadership to those who follow their Virtue. They are generally referred to as "Gatekeeper of (Virtue)".

The gatekeepers have no formal assembly - but there is often an unofficial council of gatekeepers where they meet to discuss matters of faith and decide on the allocation of the Empire's bounty or True Liao.

The gatekeepers are responsible for determining who receives the precious, and limited supply of true liao. They are expected to choose someone of obvious virtue to receive each dose. Normally, a dose of true liao is used to experience a past life vision, but there are several other uses to which it can be put. Regardless of the wishes of the gatekeepers, the law is crystal clear. The gift of true liao is a reward from the Synod for virtuous behaviour, and the recipient is free to put it to any legal use they wish.

In practice, each gatekeeper tends to take their own approach to the title. Some act as an unofficial proxy to the cardinal who appointed them, working in their interests to support the faith. But sometimes they take the opposite approach. When a virtue assembly is split politically or over doctrine, the cardinal may agree to appoint someone with opposing views as gatekeeper. Some restrict their role to seeking out suitable candidates for true liao - but during the time of Emperor Ahraz for example, the gatekeepers operated as an unofficial body overseeing inquisition and condemnation, organizing other priests to root out perceived corruption in the Senate and Military Council.

First deserve it, then desire it.

The gatekeepers are responsible for determining how true liao will be distributed. The legal requirement for a decision is for a majority of the gatekeepers (four) to inform the civil service of the single decision on who will receive each of the available doses of true liao. By custom, the gatekeepers often seek a unanimous decision but this is not required - the names of four gatekeepers appended to a written document detailing who will receive each dose is sufficient. Once the decision is made, it cannot be changed; a ruling instituted during the reign of Empress Brannan following several high-profile murders.

By longstanding tradition, the gatekeepers meet as a group to discuss candidates, but there is no formal meeting organised by the Civil Service. Though they are rare, there have been periods of Imperial history when the gatekeepers have been unable to agree a single candidate.

Usually, the gatekeepers will meet informally to agree their choices, acting as a defacto body similar to the Senate or the Conclave. This reflects the intent of the laws passed at the time and scholars have noted the similarity with a greater majority in the Synod. But no council has ever been formally established by Senate motion, and attempts to pass Senate motions that share a power between other title holders, outside of one of the five great houses of the Empire, have always been ruled unconstitutional. Many modern constitutional scholars question whether the titles would pass scrutiny today. The complex constitutional challenges posed by the existence of the gatekeepers has thwarted all attempts to put the allocation of liao on a more secure legal basis.

It is heavily frowned upon to name a gatekeeper from the same nation as the cardinal. This custom dates back to the creation of the gatekeepers. Any cardinal who breaks the tradition risks the suspicion of their colleagues and the censure of their fellow priests. It can be difficult for such a gatekeeper to gain the respect of their peers, especially if they are a member of the same household as their cardinal.

The cardinal of a Virtue Assembly - excluding the Assembly of The Way - has the right to appoint a member of their assembly as gatekeeper.

Every time a new cardinal is elected the cardinal may choose to replace or retain the existing gatekeeper.

A gatekeeper serves until they die, step down, or a new cardinal is elected and chooses a new appointee. It is important to note that once appointed the cardinal cannot choose to simply remove their appointed gatekeeper from office. Only a successful re-election or revocation allows a cardinal to appoint a new Gatekeeper.

A gatekeeper can be revoked by the General Assembly, and by the appropriate Virtue Assembly.

The History of the Gatekeepers


In the early days of the Empire, the allocation of true liao was controlled by use of the judgement of rewarding. Unfortunately, the rarity of true liao lead to increasing conflict within the Synod as priests squabbled over the precious material. The disposition of true liao became such an important political issue it started to dominate the Synod, leaving them less focused on their role as spiritual advisers to the Empire. This state of affairs continued to deteriorate until 72YE, when Empress Teleri - as part of her overhaul of the Synod - worked with the Imperial Senate to address the issue.

The cardinals proposed to move control of true liao to the Assembly of Nine, but Empress Teleri resisted passionately. She saw no advantage in allowing the often deeply political cardinals to directly control access to true liao - she wanted the decision about who would have access to the substance to be spiritually, rather than politically motivated. In the end a compromise was reached and a separate title of gatekeeper was created. One gatekeeper was appointed by each cardinal and they would decide the disposition of the liao together. Teleri attempted to make it a legal requirement that the gatekeeper could not be from the same nation as their cardinal, but the Constitutional Court ruled this to be unconstitutional, much to her chagrin. Empress Teleri was able to make her requirements known - but was unable to legally enforce them.

The prominence of the gatekeepers has waxed and waned. During times where the Synod is especially active, the gatekeepers often work closely with the cardinals, almost like additional proxies. While they have no specific legal powers in this area (beyond those available to every member of the Synod), they are often called on to represent their virtue assembly when the cardinal, or their proxy, is busy with other matters. There have been repeated incidents where corrupt, weak, or unpopular cardinals have been displaced by their own gatekeepers - this is seen as evidence that the system works, that the gatekeepers also keep a close watch on the cardinals for signs that they have abandoned spirituality in pursuit of political power.

The current gatekeepers are listed here - the full election history for each title are shown below.