Yes, I know they will lie. Everyone lies. I want to hear what they sound like when they are lying. I want them to know I can see through them.

Inquisitor Reuben, of the Assembly of Vigilance 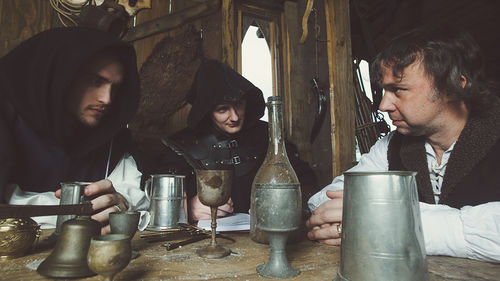 The primary purpose of inquisition is to investigate and expose unvirtuous behaviour. The target or targets of the inquisition are compelled to appear for questioning before the Imperial Synod at the appointed hour. The priest who raised the judgement is expected to lead the proceedings; some prefer to conduct the inquisition entirely by themselves, while others will ask one or more peers to help them question the accused. Whatever they decide, they have one hour to asking probing questions to discover the truth behind the actions and motives of the accused.

A judgement of inquisition may be raised by any assembly of the Imperial Synod. When the judgement is raised in a national assembly, it may only be used to inquisition members of that nation. The virtue assemblies may raise a judgement against anyone - but they are expected to restrict the remit of their inquisition to matters concerning their virtue.

When a judgement of inquisition is submitted, the priest who raises the judgement is expected to agree a time for the questioning with the subject of the inquisition. If there is evidence that this has not happened then the Tribune will take steps to attempt to inform the subject of the judgement. Usually they will send a messenger to find the citizen to ask them to attend the Hub so that they can be briefed on the development.

While it is legal for a priest to raise a judgement of inquisition against themselves, doing so risks censure as an abuse of priestly powers, and must still achieve a lesser majority.

Hearsay is half lies.

The priest who raises the judgement of inquisition must decide the time and place that the inquisition will take place. Attendance is a legal requirement, but magistrates must be satisfied that that the choice was reasonable and was agreed with the target. The expectation is that the priest will work with the targets of the inquisition to ensure that the venue and date are practical for them to attend where possible. The legal duration of an inquisition is up to one hour. The subject may choose to leave at any point after the hour has passed.

An individual may not be subject of an inquisition more than once per summit; anyone who has already undergone a inquisition that weekend is not obliged to attend another.

The priest who raised the judgement is expected to lead the questioning at an inquisition, but at their discretion they may choose to invite other priests to assist them in questioning the accused. Whatever happens, Imperial law is still in force during the inquisition. and any unlawful treatment of the person under inquisition is still a crime.

If the inquisition identifies behaviour that warrants bringing to the attention of the wider Empire then the priest who raised the judgement may proceed to escalate this to a sanction. This escalation is considered to be an extension of the inquisition, it will be submitted by the Tribune of the Synod on behalf of the priest who raised the original judgement at their request.

Refusal to attend an inquisition is usually sufficient grounds for condemnation and prosecution for subverting the agencies of state, provided that the target or targets could reasonably have attended.

Magistrate Elsbet, plucked her pince-nez from her nose and laid it carefully on her desk. She rubbed the weariness of a long day from her eyes, and then returned her gaze to the advocate standing in the doorway.

"So your judgement of inquisition for the Mourn Senator passed the Assembly of Ambition but James did not show up?"

"That is correct magistrate - we condemned him for his absence. And now we are passing the matter to yourselves to deal with."

"How generous. What time did you set for your inquisition?"

The faintest flicker of a smirk passed over the Dawnish man's face. Elsbet sighed again. She briefly contemplated trying the case but her time wasn't worth the fine the advocate was going to get, so she opted for sarcasm instead.

"Two hours past midday. But wait! By sheer misfortune you chose exactly the time of the Senate Session - and with that important vote on the assignment due. What a coincidence. I'm surprised James didn't mention the conflict when you sent word of the inquisition."

The man's face turned sour, there was no smirk in sight now. "It's still a crime magistrate - failing to appear before an inquisition is subverting the agencies of state!"

Elsbet snorted in derision. "Oh a crime has been committed - of that I have no doubt. Inquisition is a delicate tool citizen, a scalpel to be wielded by a clever surgeon to expose wrong-doing. It is not a club with which to bludgeon your political rivals. Your transparent ruse to inquisit the senator at a time he clearly could not be expected to make is self-evidently an abuse of powers - by you. Fortunately for you, I can't prosecute without a judgement of condemnation by the Synod. So either you leave me to get on with some real work - or I shall speak to the Gatekeeper of Wisdom about raising a suitable judgement."

She picked up her pince-nez as the advocate turned and fled. Sighing again, she put them back on her nose and returned her attention to the militia report. It had been a long day.