It is not possible for anyone to play a barbarian character as your player-character. All the players at Empire are playing Imperial characters or characters welcome in the Empire. Barbarians are not welcome at Anvil and there are few long term roleplaying opportunities for them there. However everyone has the opportunity to play a barbarian at the event by joining the monster team for one or more of the big battles or the smaller quests.

Monstering one battle is a requirement for each battle you play in Empire, so even if you don't want to volunteer at other times it still makes sense to approach monstering in a way that will make the experience more enjoyable for you and the other players. Everything that follows is completely optional - but getting enthused about the opportunities to play barbarian roles doesn't just improve the event - it makes the experience of monstering more fun.

The Empire setting has been deliberately designed to create opportunities for players to be creative and get involved in making the battles cooler - for themselves and everyone else - if they want to. Getting more involved is completely optional - it's for those players who want to get more out of the event (and put more in for everyone else). 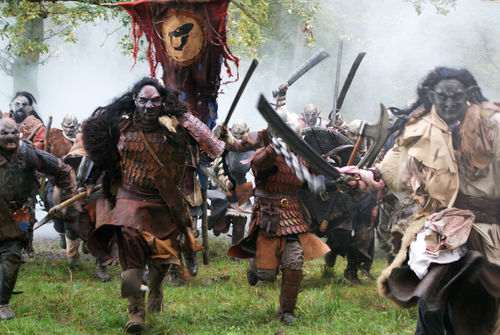 Roleplaying as a barbarian

During the battles and large skirmishes at Empire events players will commonly be roleplaying as the troops of the three main barbarian nations - heroic Jotun warriors, skilled Grendel soldiers, cruel Druj fighters. This is a great chance for you to try something new at LRP, fighting with different weapons, portraying a different character's behaviours and roleplaying as a barbarian intent on destroying the Empire.

Our Battle Team have put together the follow briefing sheets to provide guidance on roleplaying as the barbarian orc you play in a battle:

Copies of the brief will be handed out to monsters before each battle and our Battle Team will be able to answer any questions you have. These briefs provide an idea of the attitudes and behaviours of the different orc nations, what motivates them, and how they should act upon the field. We hope that they will provide you with interesting hooks to roleplay with the other monsters in your unit, and to convey our vision of the barbarian orcs when you encounter the players.

The Empire is surrounded by four powerful orc nations, each of which fields their own elite forces on the battlefield, alongside their rank and file clan warriors. Players who are interested in getting more involved in monstering are encouraged to look at the elite forces and see if one of them appeals. Initially we will aim to phys-rep the elite troops using our own dedicated monstering team, but our hope is that some players will group together to create their own elite monster unit. These special units are more skilled than the regular tribal warriors and they will often be given key roles in the battle - our goal is to make them as much fun as possible to play to reward players who make the effort to get invested and bring them to life.

It's a good idea to think about which of the barbarians your nation is likely to be going to war against. At present, the Empire is at war with the Jotun, the Druj, and the Grendel; battles against these three nations are likely to form the mainstay of encounters at present. If you think your nation are keen to engage the Grendel - then you are likely to be fighting as a Jotun warrior when you volunteer - therefore it makes sense to look at creating an elite Jotun unit if you want to get more involved.

To be useful in a battle, an elite unit needs to be pretty large - ideally 30+ members. Everyone is encouraged to make good monster kit for the battles, but our generals will base their battle tactics on the groups of troops they have available to them - not on individual warriors. We know that people like to fight together with their mates on the battlefield - so the best way to get more involved in monstering is to create an elite orc unit together with your friends. That way there will be a mob of you that can be deployed together on the field. Few player groups number 30+ in size, so it's worth asking round friends in other groups in your nation - if a few groups create an elite monster unit together then you will be able to play something really terrifying on the battlefield!

Planning and running a battle requires a lot of logistics. We want this to be as streamlined as possible, so if your group is excited about the idea of portraying an elite unit then there are things you'll need to do to work with us to make that as simple as possible. You'll need an OOC liaison who can communicate directly with PD, so that we can exchange information and ideas back and forth quickly and efficiently.

You'll also need an IC unit leader who can lead your elite unit on the battlefield. That person will need to come to the battle planning meeting the night before the battle you are monstering - this is a quick meeting to let everyone know what will be happening on the battle the next day - it's usually late in the evening and lasts around ten minutes. It's war-war - not jaw-jaw!

Andy Connell - the member of our skirmish command team who deals with the IC leadership side of the battles has agreed be our point of contact for everyone interested in this - you can email him him with any questions or queries you have about playing a barbarian on the battlefield. Ideally we want player groups to choose different elite troops options - so liaise with Andy early and he can give you help and advice on what options are available. 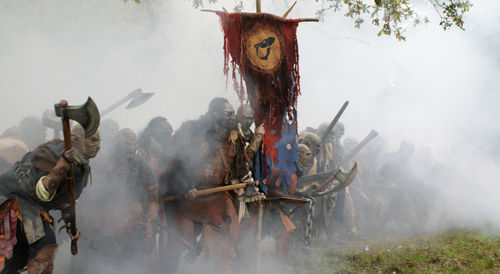 One of the best ways to get the most out of live roleplaying is having nice kit for the characters you play, and many players enjoy making kit. We spend a lot of money buying new kit for our barbarians - but you don't have to rely on what Profound Decisions can supply - you can create your own costume for your barbarian role just as you might for your own Imperial player-character.

It doesn't have to cost much, there are guides online that show how to create a barbarian orc costume very cheaply. Even just adding a few touches to the armour provided to all the volunteers playing barbarians will make your group look amazing.

How to make a very basic orc monster kit for £10 - photo tutorial.

For many experienced LRPers, the starting point for creating any character is to look at what existing costume you can reuse. We have updated the wiki pages with information on the look and feel of the barbarian nations, which includes explicit advice on how to reuse existing kit you may have to get the best look.