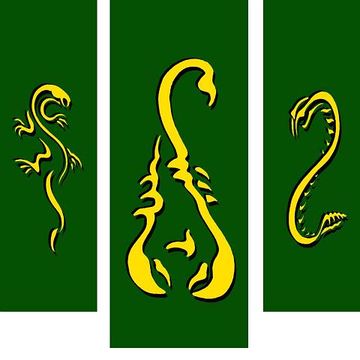 The Druj are orcs who dominate the lands to the east of the Empire. Historically they have been ancient enemies of the Highborn, the The League, and Dawn - fighting with the Empire for control of Holberg, The Barrens and Reikos. In recent times they have also moved to threaten Brocéliande, Therunin, Semmerholm, and Zenith. They are the most notorious of all the Imperial enemies, infamous for their cruelty and treachery. This reputation is not confined to the Empire - their name is a byword for treachery even among other barbarian tribes most of whom also seem to consider the Druj to be beyond the pale.

The Empire sees the Druj as irredeemably immoral and wicked, but the truth is more complex. No other orc tribe is as ruthlessly dedicated to achieving their objectives, or more ready to pay the price for their victories, as the orcs of the Mallum. Each time they are defeated they come back stronger and craftier; each loss a lesson they employ to push them ever closer to their ultimate goals.

As long as it benefits the tribe in the long term, the Druj will use any tactic, no matter how distasteful others may find it. Poison, disease, treachery, ambush, dark magic, torture, wholesale destruction - all are simply tools to be used as needed to ensure success. These cruel orcs turn all their cunning to exposing and exploiting the weaknesses of their enemies - weaknesses like overconfidence, complacency, compassion, virtue, faith, honour, and pride. They enjoy leaving badly injured, crippled enemies alive so that their opponents' compassion and sense of honour will saddle them with wounded, poisoned soldiers who must be protected and cannot fight. They lure the overconfident into ambushes, or into overextending themselves so that they can be cut off from the main body. They capture holy relics, respected heroes, and symbols of pride and faith, and defile them utterly in the sure knowledge that angry opponents will make bad choices.

From birth the Druj are taught that living creatures are defined by their weaknesses. The weak exist to be exploited, manipulated by the strong in pursuit of victory. Fear, in particular, is a weakness the Druj wield with masterful expertise - cowing their victims and terrorizing their enemies with equal gusto. Druj seek to inspire such dread in their enemies that they will have won the battle before they even come to fight. The weak will bow before them, while the strong will seek easier prey elsewhere. Their society is tiered on perceived weakness; powerful clans expect deference from their lessers, who in turn do their best to twist and manipulate those slaves, servants and allies beneath them. A vast and terrible web of fear and cruelty extends about the Druj lands.

These orcs live by the saying "You cannot betray your enemies" (which they claim the Navarr stole from them). Bitter experience has taught any who deal with them that an agreement with the Druj will last only as long as it benefits the Druj more to keep to the deal than to betray their word. Deals with the Druj often become a cat-and-mouse game to see who breaks their agreement first. Many Imperials have met a tragic end because they either assumed that this time the Druj were not tricking them, or because they assumed they saw the trap... missing the other traps nested within.

5 things to know about the Druj

What the Druj are not