The Druj armies feature a number of powerful characters who provide support and leadership to the troops, and fill out roles not performed by the arkad or the common warriors.

The Druj tribe is ruled by the buruk tepel, a coterie of highly-skilled apothecaries and poisoners. These individuals are apparently fierce rivals but they work together to ensure the Druj survive and prosper. The tepel are their agents and primary servants, carrying their masters orders to the Druj. They also exert iron control over the arkad who are dependent on tepel for the tisanes used in their sacred rites. Those who cross the buruk tepel face death - either from poison or more directly at the hands of the feared Kallad.

The Empire has rarely fought a buruk tepel on the battle field, their leadership appears to be political and spiritual rather than military. Indeed although there are usually tepel present in most Druj battles, they rarely take the lead. In battle, command is given to a het - one of the powerful leaders of the many druj clans (or more rarely to the leader of a subject tribe). The tepel who are present are usually there to provide crucial herbal support and more importantly to ensure that the wishes of the buruk tepel are carried out and most ominously to report the details of any failure.

The Het are the battlefield leaders of the arkad. Each unit of arkad has their own het, chosen by the warriors within the arkad. A good Het is not always the best fighter in a clan, but the orc that displays the most devious mind and tactical acumen. Knowing when to flee from a fight, and when to save the lives of those beneath them is a trait that will win a Het praise in their akrad. Their position is secured through demonstration of successful raiding; displays of skill, cunning or willpower; and the support of the buruk tepel.

The het get the pick of any spoils, and as a consequence usually have the best magic items. At the very least they are likely to possess magic armour and weapons appropriate to their arkad.

While the Het are appointed by the warriors they lead, the arkad are not democracies. Once the Het is appointed, their warriors are expected to follow their instructions to the letter. The buruk tepel keep a close eye on popular het, expecting them to exemplify the druj values of cunning, expedience, and ruthlessness. 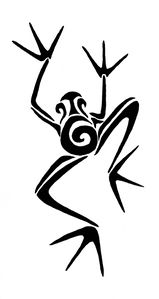 The tepel are masters of herb lore, practitioners of physick and the apothecary arts. Some concentrate on providing powerful potions and blade venoms to the arkad, others devote their talents to providing battlefield healing. They can easily be identified by potion bandoliers, surgery tools and pouches of herbs that they carry. The tepel have a great deal of independence compared to many other Druj, and are free to serve on a battlefield as they see fit. Some embed themselves within the arkad, guiding the het and supplying the warriors with narcotics and potions. Others roam freely, using their abilities where they believe they will make the most difference.

These herbalists are highly regarded among Druj warriors. All the Druj in an arkad will look out for and protect the tepel who fight alongside them. A handful of tepel serve as direct agents to the Buruk Tepel. Serving on a battlefield is one of the best ways to attract the attention of a Buruk Tepel, and achieve this prestigious station. These favoured few sometimes conceal their status, preferring to remain anonymous the better to watch the rest of Druj society. As a consequence, most Druj assume that any tepel is a secret agent for the sinister powers behind their nation.

Tepel in Play: We envisage the tepel being a role that suits players wanting a low-combat monstering role that keeps them out of the front lines. In a battle the tepel may join along with members of an arkad as a dedicated healer, or will organise with other tepel to form bands of roaming physicians behind the lines or as mobile pairs that race to provide units with poisons to use at critical times. We expect player taking on these roles to provide their own physreps for herb pouches and potion bottles, in addition to the game resources that PD's Battle Team will supply.

Whilst the het lead bands of Pakkad and Chikad on the battlefield, the Vikari are usually directed in battle by a cicatrix. These individuals rise from among the Vikari mages, marked out by exceptional cunning and magical proficiency. They are often older veterans of the Vikari, or former tutees of the Ghulai, that understand the myriad ways of magic and their uses on the field of battle. These seasoned warriors often bear scars from past engagements and are sometimes referred to as "the Scarred" (in contrast to the Bloodied, a common epithet or the het). In some cases a cicatrix will ritually scar themselves before a fight, their faces becoming a gruesome mass of scar tissue and jagged lines. A few particularly sadistic cicatrix will have their followers paralyse their foes before drawing poisoned blades down cheeks or across foreheads; the tainted weapons often leave a lasting reminder of the encounter with the Vikari.

Instead of focusing solely on incantations like their fellow Vikari, the cicatrices turn their attention to the study of a particular realm of ritual lore. They particularly favour rituals that will deliver curses to their foes. They most commonly focus on Spring and Night magic, but a few also look to Winter, especially those who desire a deeper repertoire of curses to draw non.

The tepel often bestow magic items or potions that enhance ritual mastery on a cicatrix, and they are sometimes equipped with paraphernalia that can assist them in casting greater numbers of useful rituals. In some instances, the cicatrix may instruct favoured apprentices among the Vikari they lead in ritual magic so that they can help their leader perform more potent rituals.