Across the northern mountains, beyond Wintermark and Varushka, lies the cold land of Otkodov, where the Dragons rule. The Thule tribe is used to the cold, ruled by their shamans; cold, calculating and hungry for power, the Thule are a formidable force not because of their magical power, but because of their potent ability to wield it where it can cause the greatest damage. In the past they have been like cold-hearted locusts, descending on human settlements and stripping them of their assets before fading back into the mists and shadows. In recent decades they have changed their tactics, attacking in force and conquering Imperial territory for their own inscrutable purposes.

The Thule are ruled by their magicians. Almost all positions of authority within the tribe seem to be held by those capable of working magic. Ritual magicians - or warlocks - hold more power than those who focus on the performance of incantations, and the tribe as a whole is ruled with an iron fist by potent, aged shaman-ritualists called the Dragons. 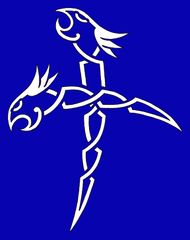 There is a great deal of competition between warlocks, apparently, over magical resources, access to regio and mana sites. Lesser warlocks can gain power by challenging and defeating their superiors in ritual combat, and some scholars believe that a powerful warlock can ascend to become a Dragon in the same way.

Those unwilling or unable to master magic take second place to their magical leaders - they are accorded few rights and survive by currying favour with the warlocks and their covens. There is little opportunity for Thule who are not ritual magicians to progress, although the bravest and most successful warriors may come to enjoy the patronage of a powerful warlock and enjoy access to great wealth and prestige. Skilled artisans are something of an exception - although they have no political power, they are considered on a par with lesser warlocks or shamans, and enjoy a degree of protection and influence as a consequence.

"Thule are thieves" as they say in some parts of northern Varushka. Even when they are not stripping an area of valuables, they are known to strip the dead for anything that may be of use to their tribe. The value they place on raw materials may go some way towards explaining why they are the most cautious of the barbarian orc tribes that threaten the Empire - they seem to abhor waste. This is widely believed to suggest that Otkodov is relatively resource-poor compared to the Empire.

The Thule are slavers, and the stories of the few escaped or liberated Imperial slaves paint a grim picture. Slaves are poorly treated and sometimes worked to death. Some allegedly are transformed into undead warriors, or have their blood spilled as offerings to dark spirits or sinister eternals. For years there were also allegations that the Thule fed their slaves on the remains of other slaves. Rak Who-Speaks-For-The-Dragons-Undivided, the Thule emissary to the Empire, has unequivocally condemned this practice. While he accepts that some foolish overseers might think this is a way to keep slaves in line, he claims that no Warlock would countenance cannibalistic acts of this nature whether human or orc. To do so is to give power to the entity known as the Hunter in the Wastes which no sane warlock would countenance. While the Thule do little to deny that their slaves are poorly treated, it seems important to the Thule that the Empire not believe they engage in forced cannibalism for some reason..

The intricacies of Thule society are not well-known to Imperial citizens, and they seem to take pleasure in cultivating an aura of mystery. Prisoners rarely speak about the business of the tribe, apparently being much more afraid of the Dragons than they are of death or the Howling Abyss.

The Thule are known to deal relatively well with both Jotun and Druj - Thule mercenaries have been encountered in armies controlled by both these tribes. They apparently serve in return for payment, which offends their Jotun allies and leaves them open to treachery by their Druj allies. Commonly, a warlock serves with another tribe either for the opportunity to claim resources and wealth, or to spy on that tribe or the Imperial enemies they are fighting.

Warriors of the Thule

Among the armies of the Thule, certain warriors especially stand out. They include: 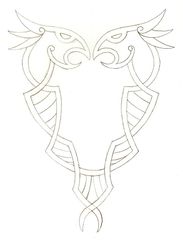 Magic is at the heart of the Thule nation; where other tribes value physical strength, the Thule value the use of magic. They are ruthless in their pursuit of mastery, and heartless in its application; but they are still orcs. Thule magic is visceral and passionate, bound up in pounding drums and invocations of their ancestors as much as it is channelled through runes or implements. 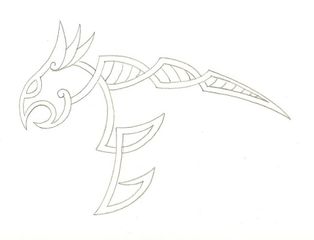 From extensive interrogation of captured prisoners, the Empire has built up a basic understanding of Thule history. The tribe may have had its roots in the Jotun, but split centuries before the arrival of the Highborn and formed a distinct tribe. The cause of the split appears to have been dissatisfaction among several cabals of ritual-working shamans, influenced by certain 'malign ancestors.' There is no way to tell how trustworthy this version of their history is. The fact remains that the Thule have been in Otkodov since long before the arrival of the Vard and the Steinr.

For the most part, the Thule kept to themselves apart from occasional raids into Wintermark and Varushka, most commonly after particularly harsh winters. Over the last century or so, however, the Thule have become more aggressive, and have been particularly vicious in raids against mana sites, mines and forests. This culminated in 366 YE with a serious campaign of conquest against the Varushkan territory of Karsk which fell to the Thule in 368 YE and is still occupied to this day. Shortly after, in 373 YE they attacked Skarsind in Wintermark under the aegis of a supernatural blizzard and with the assistance of a dozen enslaved Artok shattered the Imperial defence and claimed the territory.

According to Imperial observers, the Thule are consolidating their positions but also stripping the captured territories of their valuable resources. Some of these resources are being used to reinforce their armies, but the lion's share is being sent north. Fighting against the Thule is fierce, especially since the disastrous death of Empress Britta and most of her court.

Of potential interest to the Empire is that there seems to be a growing schism among the Thule forces in Karsk. Over the last two years it has become clear that the invading orcs are fighting among themselves, and with some of the few remaining indigenous orcish bandit tribes. It is not clear if this is a purely internal Thule problem, or a problem the tribe is having in bringing some of the local orc brigands under their banner.

The Thule favour dark, hooded robes and cloaks, emphasizing their size and bulk with fur pelts over their shoulders. A dark blue underlayer is common, and they consider a dark blue hue to be fortunate. They revere dragons and wyrms as totemic beasts full of potence and cunning. They commonly depict animal skulls on their banners - they are particularly fond of mocking the totem animals of their enemies, and may surmount their banner pole with a dead eagle or an eagle's skull when fighting the Varushkans.

The Thule make extensive use of the Wintermark runes, often displaying them in highly stylised, intricate forms. Scholars are divided as to whether this use of runes has been adopted from their Imperial enemies, or derived directly from the ancient runes in parallel with the human versions.

As we waited on the edge of the glacier, we watched it rolling from the crevasses, up through the ice and from the narrow passages scarred into the mountainside. Cold and grey, it licked first at our boots, our ankles, our knees, rising until it sat around us in a thick muffling fog, caressing our skin with its frozen dead touch.

Next we heard them; phantom voices, shuffling steps, all distorted by that damned mist. The line started to falter, looking from side to side for the source of the dull keening that seemed one moment a mile away and the next inches from your ear. I could hear the scop's voice, low and insistent as she fought to calm the green troopers at her side; hear her tone rising as she began to lose her own courage. Then out of the mist they came, slack-faced, empty eyed, and shambling like the walking corpses they were. Some were rotted to skeletons, others still wore flesh and blood-soaked furs. They had been Suaq once, but no longer. I forced myself to look away from their faces. Better not to recognise them.

They fought silently, as my comrades raised weapons and shields, hacking apart dead flesh with grim efficiency despite the fear that threatened to grip us all. They came, unarmed and seemingly endless, clawing over the carcasses of their fellows to reach us. Each alone was little threat, but they struck in force and in great numbers, and more than one of us found himself overwhelmed and dragged to the ground by cold hands. Wave after wave, on and on they came, until it seemed that the day was lost, that surely the retreat would sound -until at last, there seemed a break in their line, and the fog began to lift. A ragged cheer rose up around me; we pressed forward, pursuing the husks that seemed suddenly in retreat, chasing them down with renewed courage and vigour as the sun slowly melted that cursed fog away to nothing.

Only I saw him. A lone, orcish figure, hulking and black against the ice of the mountainside, a twisted black iron staff in his hand. Perhaps it was my imagination, but he seemed to acknowledge me, one hand raised in a mocking salute. His cold laugh carried on the wind towards me, and my heart turned to ice at the sudden knowledge that we had all been tricked, and that the real attack was elsewhere.
Retrieved from "https://www.profounddecisions.co.uk/mediawiki-public/index.php?title=Thule&oldid=72819"