Liao and the Labyrinth

Imperial Orcs derive no benefit from taking liao and do not believe that they reincarnate. It is a key tenet of Imperial Orc belief that each orc has only one life, and that after they die there is no coming back.

Exactly what happens to the soul of an orc after death depends on how they have lived their lives. Most orcs fall into the Howling Abyss that they believe waits for them after death. The Howling Abyss tears their soul to pieces and casts those pieces into oblivion. Such orcs are utterly annihilated and gone forever. It is literally a fate worse than death.

Some humans claim that the lack of reincarnation is proof that orcs have no souls, but the Imperial Orcs believe that the souls of orcs are simply different to the souls of humans. Experiment has shown that auras created with liao ceremonies still affect orcs as do ceremonies such as insight and testimony so the majority of synod members accept that orcs must have souls even if doubt remains over their ability to enter and pass through the Labyrinth of Ages. 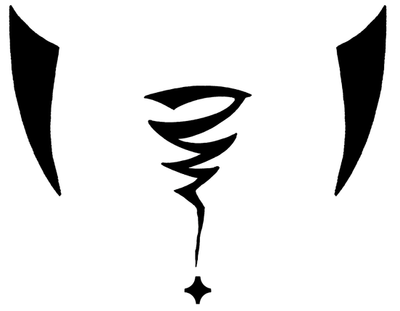 Symbol of the Howling Abyss, as chosen by the Imperial Orcs National Assembly
during the Winter Solstice 380YE.

The greatest, the most powerful, the truly legendary orcs, those capable of inspiring a generation with their deeds, are able to cross over the Howling Abyss to the other side. What lies on this farthest shore is not known, for these ancestors never speak of it, but they are strong enough to pass back through the darkness. By doing so they are able to influence and guide their descendants, to speak to them, and to lead them through the Abyss after death - provided they are worthy.

Orcs who have powerful ancestors may receive help from them when they die. The ancestors come for those who have managed to achieve greatness, who strive and succeed against the odds, and help them cross the Howling Abyss. These orcs will return across the Howling Abyss many times, seeking to help their allies and offspring grow strong, but eventually they become too weak to make the journey and can no longer return. Only the most powerful ancestors, those capable of making the journey unaided are able to continue to aid their descendants forever more.

Orcs hear the words of their ancestors in battle when roused to fury. These voices are those of orc ancestors whose greatness allows them to cross the Howling Abyss to offer guidance to their descendants, or those who have been aided in crossing the Howling Abyss by the ancestors.

It is an unspoken fear for many Imperial Orcs that their ancestors are not strong enough to carry them across the Howling Abyss, and that their slave and barbarian ancestors will never guide them through the darkness because they do not embrace the violent, anti-human teachings of these resentful ancestors. They are left with the inescapable conclusion that unless they can produce strong, inspirational ancestors their people are doomed to oblivion after they die.

Imperial Orcs seek new Imperial Orc ancestors – ancestors who can understand the Empire and the lives the Imperial Orcs have chosen, and offer them support and guidance. The only way this can happen is for Imperial Orc heroes to emerge, and through their deeds and the reverence of their people, gain the strength to cross the Howling Abyss.

To become an ancestor, an orc must be carried within the proud hearts of their people. They must pour their tale into the soul of future generations and become a legend while still alive, respected and admired by their peers and offspring. It is not, however, one that is easily achieved. Each victory in battle, each notch on their blade and each new story to tell around the fire adds to their legacy, and the quest towards becoming an ancestor. Some Imperial Orcs seek triumph in battle in the name of the Empire, aiming to fell the mightiest foes while still living to fight another day. Others seek to remain in the hearts and memories of their people for their wisdom or cleverness, strengthening and nurturing their fellow orcs and building an enduring legacy for later generations.

The ancestors in play

How well your character can hear the ancestors is left almost entirely to the individual player's character and roleplaying. The usual time to hear the ancestors is when you're in a heightened state of anger or fear, especially in combat. You become aware of them around you; usually it's a rumbling of many voices where you can't make out the meaning, but sometimes you can hear an individual ancestor offering guidance.

It is extremely unlikely that a ref will ever inform you that an ancestor is talking to you - or what they are saying. What is important to bear in mind is that you aren't just making this up - orcs really do hear voices when they are agitated, and when they compare notes they often hear the same kinds of voices telling them the same kinds of things. The ancestors really do move orcs to acts of heroism and glory, or try to encourage them to stab an insolent Dawnish knight in the guts in the middle of a tense negotiation...

Orcs can only hear an ancestor if they are a direct descendent of them, knew them well when they were alive or are a descendent of someone who knew them well. This means that you may hear your uncle or your grandfather, if you regard that figure with respect and admiration, but other Imperial Orcs probably won't unless they are also have a link to your ancestor. 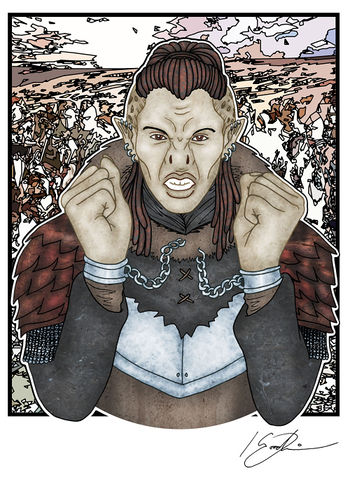 The ancestors are only dimly aware of your character and what you are doing, so the guidance they offer is invariably quite general in nature. In battle, they may alert you to imminent danger with a shout of warning. It is very common for them to exhort you to action but the words they use are never specific. If they do use a name, it is as likely to be someone else's name as your own. Despite this the advice given is applicable to what you are doing, at least most of the time.

Most orcs only experience communion with the ancestors when battle is upon them but a few individuals - called shamans - are able to hear the voices more frequently. Shamans occupy a unique position in Imperial Orc society, as a result, but many are moon-struck, their minds affected by the constant attempts by the ancestors to communicate with them.

The Imperial Virtues are clearly a part of what makes the Empire what it is. As a result most Imperial Orcs at least pay them lip service and there is a drive amongst some orcs to embody the virtues as keenly as possible, to prove themselves the equal of any human citizen of the Empire. Those Imperial Orcs who embrace the Way and become priests are called Preachers.