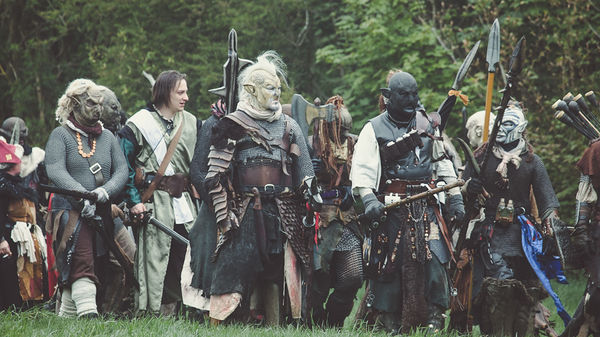 For many years, most Imperial Orcs were soldiers. They enlisted in one of the two Imperial Orc armies with the rest of their legion, fighting the enemies of the Empire. Orcs have an instinctive desire to belong to something, to be part of something bigger than themselves, and most enjoyed the camaraderie and the sense of commitment and purpose they gained from being part of an army. For an Imperial Orc, their legion, their army, and the Empire itself were fundamental to their identity. They took great pride in being part of something greater than any individual, and the triumphs of the Empire were their triumphs. For the Imperial Orcs, the Empire was their nation.

Even those who did not serve in the army tended to live in one of the many legion camps dotted around the Empire. Some dwelt there permanently, others moved from camp to camp with one of the Imperial armies. Life in the legion camps was crowded; orcs slept in large communal tents and ate, trained, and worked together. This military discipline extended even to those who were not formally part of one of the armies - most orcs are comfortable with the rough but unyielding discipline of legion life.

Now they have a homeland of their own. The military camps have mostly been disbanded, their inhabitants relocating to Skarsind. Where once the orcs lived in tents and makeshift buildings, they have begun to construct permanent towns, villages, and homesteads of their own. Human visitors often find these settlements a little cramped - the orcs have lost none of their affection for communal living.

This change has prompted some Orcs to question if they still need to devote their lives to martial service. Thousands of Imperial Orcs have given their lives already in service to the Empire. Nobody can question their sacrifice, but if their dreams of nationhood are to mean something more than endless war then the Orcs will need to find new ways to serve the nation. Others point out that martial prowess has always been the Imperial Orc's greatest strength. Are they to become a nation of bookkeepers to rival the League or farmers that can outdo the Marches? They have gained a measure of acceptance from the Empire, why give up the path that has served them so well? 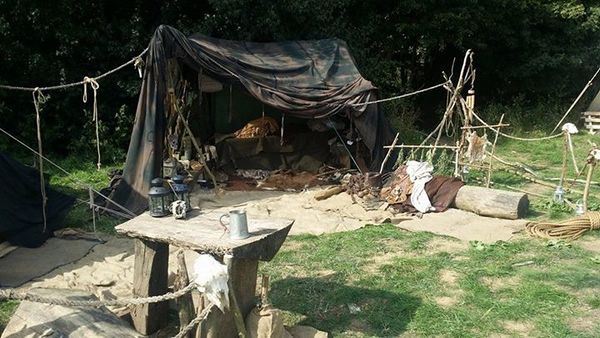 The Imperial Orcs have finally gained the chance to create structures more permanent than the army camps they once dwelled in.

Orcs tend to become anxious and uncertain when alone and seeking solitude is often taken as a sign of illness. They expect individuals to seek out company and welcome those who do but they are often suspicious of those who choose to stand alone, whether human or orc. Orcs act primarily in the interest of their legions and they expect others to do likewise; they are particularly distrustful of individuals who claim to represent only themselves. An individual, or better still a group, acting on behalf of a larger body are usually much better received.

Nobody likes to be considered stupid, but Imperial Orcs take particular exception to the idea that they are uneducated or "slow." Some orcs react very negatively indeed to any suggestion that they might not be able to follow someone's train of thought, or might not be able to read something for themselves. They make little distinction between someone inadvertently patronising them in a well-meaning way, and someone who is trying to directly insult their intelligence. Actively mocking an orc's ability to read or write is to openly insult their status as a civilised citizen of the Empire. 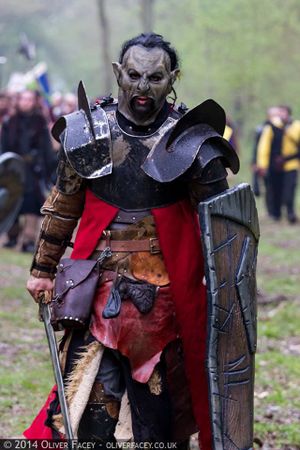 A passion for fighting burns in their blood.

In the mind of most Imperial Orcs, the laws have no grey areas - one is either innocent or guilty and punishment is required to absolve the guilty of their crimes. Although they accept the authority of the magistrates without question, Imperial Orcs believe that only retribution can allow a criminal to rejoin their legion with honour. In cases where individual circumstances have mitigated a crime and reduced the punishment imposed, Imperial Orcs often regard the convicted as marked and shamed, even going so far as to express open distrust thereafter. A criminal who “gets off lightly” is unlikely to be welcome in the Orc camp in the future, and some Orcs convicted of crimes have been known to ask that their sentences be increased to avoid such a fate.

The Lure of Battle

The Imperial Orcs are still a profoundly martial people - a passion for fighting is literally "in their blood". Like many humans they enjoy battle and take great pride in fighting for their Empire and their legion, but for Orcs the elation they feel during a battle goes much further - becoming a definitively spiritual experience. For many it is the only time that they can hear their ancestors communicating to them. Some hear only half-whispered voices urging them on or shouting warning or advice, some hear nothing at all, but almost all derive a cathartic fulfilment from the act of fighting. The fact that all orcs receive guidance from their ancestors is central to their religious beliefs.

The danger, of which the Imperial Orcs are only too aware, is that the thrill of battle is seductive and becomes addictive. Barbarians often lose their sense of self-preservation completely when urged on to fight by their ancestors, but their numbers are almost limitless. The individual barbarian dies, but the nation lives on. The population of Imperial Orcs by comparison is perilously small and they cannot afford to fight recklessly. Discipline does not come easily to the Imperial Orcs, but the legions train to ensure that they are capable of withdrawing when a retreat is called or holding themselves in reserve until the order to advance is given. Many Imperial Orcs have come to consider that this battlefield discipline and command of tactics is one of the things that makes them superior to their barbarian cousins. All are aware that it is essential if they are to survive long enough to win territories of their own.

There are magicians, priests, warriors, and traders of every stripe in every nation in the Empire. An archetype represents a specific attitude or approach to a given role that reflects cultural values and common ambitions of a nation. Choosing an archetype helps to define your character; it provides roleplaying hooks and ready-made character goals, but it also places demands on your character in terms of how you portray them. Selecting an archetype is optional, and it's better not to pick one if none of them appeal to you.

Imperial Orcs who have served in the Imperial army use their legion name in a similar way that a human might use a family name. Most orcs put the legion name first, so an orc might introduce themselves as "Irontide Cled", "Bloodcrow Emmal" or "Sunhammer Sutin." Legion names tend to be two words that describe their goals, their fighting style or some major event in their history. For example, the Irontide Legion favours heavy armour, wheras the Bloodcrow Legion favours lightly armoured skirmishers and the Sunhammer Legion prides itself on its weaponsmiths and jewellers.

Literacy has only become widespread amongst the Imperial Orcs since they won their freedom. As a result most names are short and simple and tend not to have silent letters - they are written the way they are spoken.

Those who want a female name pick a two-syllable name with a double consonant in the middle. Most longer names are palindromes - written down they read the same backwards as forward. Very few of these names have more than three syllables.

Names that don't follow either of these approaches are usually viewed as gender-neutral.

Imperial Orcs avoid boastful honorifics. An orc will use an Imperial title when on official business, but the rest of the time tends not to draw attention to it. Likewise, they avoid honorifics such as "the Mighty" or "Icebinder." The individual orc expects others to recognise them by their legion and personal name, and if they need to add some additional element detailing their deeds, they suggest their history or personal story is not strong enough to stand by itself.

"You don't think this enormous sash is a bit much?"

"It's fine, stop fiddling with it, just act like you wear it all the time."

"It looks ridiculous over my doublet, why would anyone believe I wear it all the time?"

"Because they don't like individuals and they don't like people who claim to work for themselves so we are buying this Biting Blade on behalf of the Illuminated Guild of Temeschwar, and that's why we are wearing sashes with lanterns on them. I've been through this with you twice, just stand behind me, nod occasionally and look like you care. You're getting paid 3 rings for this charade, think about that if it helps to focus your mind."

"Won't they realize you're just buying it for yourself?"

"Possibly... almost certainly if you can't play your part properly. But if they do, they'll still appreciate that I've made the effort. So I'll still get a cheaper price. But I hired you because you're supposed to be an actor, so for goodness sake, act."

"So long as I don't end up in the cooking pot. I hear they eat people they don't like."

"And I hear that failing actors who can't pay their debts displease the Prince."