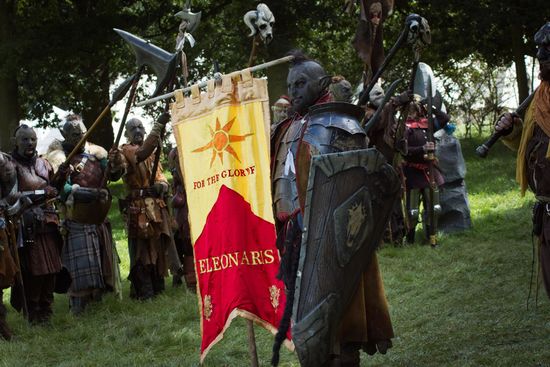 Irontide Vio was the first Senator for Skarsind - indeed the first Imperial Orc Senator - shown here with one of the many trophies
the Imperial Orcs have taken in battle.

The legions are the backbone of the Imperial Orc armies, and most Imperial Orcs are (or were) a member of one of the countless different units of tight-knit soldiers. Each legion has its own identity but most are organized along military lines, and are an official part of one of the two Imperial Orc armies. In practice the legions are a cross between a regiment and an informal family group. Although not all the members of a legion are warriors, or even members of the army, the camaraderie and mindset of the career soldier tends to permeate throughout a legion.

Each orc legion chooses its own name and symbols but most can also be identified by their favoured fighting style. One legion may have a bias for plate armour and pole-weapons, while another favours sword and shield. Warriors are usually expected to have at least a basic mastery of their legion's favoured style. Each legion is fiercely proud of its identity in battle, and a healthy, good natured rivalry exists between legions with regard to tactics and combat style. This rivalry is put aside on the battlefield, and warlords are careful to ensure that it never undermines loyalty and service to the Empire; the place for combat between members of rival legions is the fighting pit, not the battlefield.

Banners and standards are particularly important to Imperial Orcs. Legion camps are often decorated with banners displaying legion symbols, as Orcs find it reassuring to be surrounded by images that reinforce their group identity. Many bear an image of the horse as a symbol of the Empire alongside specific legion markings and colours. Imperial Orcs differentiate between banners, which are general symbols of legion identity, and a legion standard. Many legions have a legion standard, which is a symbol of the legion's pride. Trophies from particularly notable legion members or items of exceptional worth that once belonged to someone in the legion are often added to a legion standard.

Legions chose their own commanders, called warlords, with individuals chosen for their ability to provide clear effective leadership in battle, according to the traditions of the individual legion. Orcs expect their leaders to be inspirational as well as astute so the majority of warlords are powerful warriors who lead from the front. Those who lead by cunning alone need to be particularly smart and their legions are often small but very tight knit. Warlords appoint members of the legion to a chain of command beneath them, so that if they fall in battle they can be quickly replaced – the life of the legion is always more valuable than the life of any individual.

Most legions have a clear chain of command with harsh punishments for disloyalty or disobedience. Imperial Orcs usually have little sympathy with individuals who refuse to follow orders. In battle, those who find themselves at odds with a legion’s leadership face summary court martial, at other times they are usually expelled from the legion. In such cases a group of orcs usually form their own rival legion, while an individual must attempt to join another legion or face existence alone.

Few Imperial orcs have much time for or interest in the sophisticated political intrigues so popular in places such as the League. They are perfectly capable of understanding that a senator might say one thing and mean another, but among themselves they expect plain talking. In part this is because Imperial Orcs expect and demand an unyielding chain of command. Leaders amongst the orcs will usually explain the details of a plan because they want their followers to understand it, but they rarely if ever feel the need to justify it. In the view of most Imperial Orcs you either trust your leaders implicitly or you choose someone different to follow. Undermining your leaders weakens the whole legion, and is regarded with contempt when done to advance your own position.


Every time an Imperial Orc allocates a military unit to support an Imperial army they receive votes. A military unit provides 10 votes, plus an extra 2 votes for each time it has been upgraded. Only the actual rank of the military unit counts in this calculation. Enchantments, curses, penalties or bonuses for downtime effects and so on have no effect. When the senator is elected, the number of votes they have accrued over the previous year is tallied.

Rituals which magically create a military unit such as Conclave of Trees and Shadow, Carve the Crystal Guardian, and Lions of Phoenix Reach offer an opportunity for orcs who do not lead a military unit to participate in the election. Any season during which these rituals are in place, and the magical soldiers summoned are supporting an army, the orc who commands the forest or mana site they are drawn from will receive votes as if they owned a military unit of the same rank.

With the Imperial Orc homeland established in Skarsind, the Orcs now elect a senator to represent them in the Imperial Senate. Only an orc whose resource is in the territory whose senator is to be elected is eligible to vote. Any Imperial Orc citizen can stand for election as senator, regardless of their home territory.

Once the candidates have made themselves known, each in turn is invited by the egregore to present an item of worth and explain its significance to the candidate or the nation. The egregore has recommended this method because the Orcs need to be represented by someone who can hold their own in an arena where debate and the ability to express oneself are key.

Being the leader of a military unit is a prerequisite to vote, and only those who support the Imperial armies have a say in the appointment of the senator. An Imperial Orc receives a number of votes based on the quality of their troops and how often they have supported Imperial armies over the previous years. Voting is done openly - orcs are encouraged to proudly declare the number of votes they are placing behind their chosen candidate. They then stand with their chosen candiate. Once everyone has voted, any canidate can call for a formal count with the aid of the civil service and the egregore, or (in cases where victory is obvious) they can concede and declare the winner by acclaim.

The senator for Skarsind is elected during the Winter Solstice each year. As the Imperial Orcs gain more territory, they will gain more senators and these elections will be spread out through the year.

The current Imperial Orc senators are listed below - see the individual territory pages for a full election history for each position.

When the Imperial Orcs had no territories of their own, they did not possess senators. As a result the effective leadership of the nation lay with the warlords, and most especially with the two Imperial Orc generals. Generals were chosen by bouts between legion members under rules agreed when the orcs joined the Empire. When they gained control of the territory of Skarsind, this process was abandoned in favour of appointing a senator who in turn appoints both generals.

This limited enfranchisement reflects the Orcs martial history and their militaristic nature. For a time, the Imperial Orcs appointed their senator through a vote of all "soldiers". Attempts exactly to define who a soldier was caused confusion, however, and within a few short years the practice was abandoned in favour of the new method. The new method was settled on following the landmark mandate upheld by the Imperial Orcs assembly in Autumn 382YE, an then put into practice by Irontide Lok. 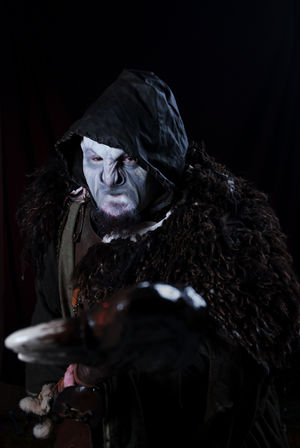 Shamans play an important role in the leadership of Imperial Orc society. Their link to the orc ancestors is considered to provide valuable insight and wisdom. By tradition shamans are consulted by Imperial Orc senators, generals, and warlords before significant decisions are made, so that they can provide the ancestor’s guidance. A warlord or similar individual might have a specific favoured shaman they regularly consult, but senators and generals are more likely to speak to all the shamans present. Individual Orcs also seek out shamans for advice when they make important decisions, either to receive guidance in making up their minds or to see how the ancestors feel about the course of action they have decided on.

It is not uncommon to ignore the advice shamans give though it should always be weighed and considered. The orcs' barbarian ancestors do not understand the life of the Imperial Orcs, and their voices tend to be the loudest of those heard by the shamans. There are exceptions; some shamans possess enough wisdom that their advice is valuable even when it does not come directly from an ancestor, and other shamans have an affinity for one or more helpful ancestors whose words often seem to be more relevant to their Imperial descendants.

A short list of well-known Imperial Orcs legions who regularly attend Anvil can be found here.