The Music of Imperial Orcs

Born from the armies of Thrace and the freed slaves of the Empire, the Imperial Orcs have settled near the City of Anvil and created many family groups and Several Legions. Having lived for many generations as slaves, there is little that remains of any tribal history or culture. Consequently, the music of the Orcs is derivative of many influences. Also, Orcs lived in many parts of the Empire, where snatches of songs were overheard and adapted.

Slave songs - These were composed in many mines and sung to simple beats played on improvised percussion instruments, these are often sombre laments for lost freedom and tales of a terrible life in slavery.

War songs - Composed by the legions during and after the rebellion. These are songs of great deeds, the joy of battle and the comradeship of arms. Played with drums and often consisting of rhythmic chants. Also marching songs for those long days on the way to war.

Songs of ‘Worth’ - The Orcish culture of recalling the history of objects and investing them with worth, alongside the worship of, and connection to, the ancestors, has led to many stories and songs being composed that are handed down from singer to singer or from Shaman to Shaman. Some are told as epic tales and sagas, and some are made into simple songs. The recent exposure to many of the Empire’s cultures has brought many musical influences into the orc encampment and songs can be done in many styles, although they still have an orcish feel of chants and repetition to them, and instrumentation is often simplified to percussion, drones and layers of voices. 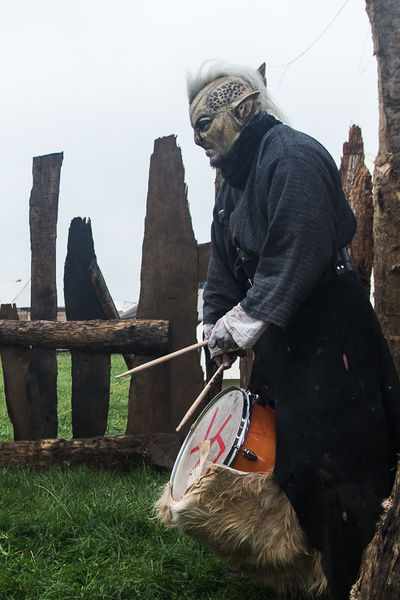 Use drums and Bodhrans for percussion.
Use of simple chords or even drones.

Tales of how 'objects of worth' have gained their value are popular. For example a banner that has been carried through several campaigns would have the battles that it was carried in told as a long story. It may mention the chiefs that fought under it, and warriors who performed great acts of courage or sacrifice. This could be told as a saga with some sections sung or chanted, and be accompanied by a drumbeat or clapping to help get the audience involved.

It is important that music for the Orcs has the correct 'feel'. It should not be too folky or modern in feel. If you want to adapt a song that you know, try performing it with just drums or unaccompanied.

There could also be a simple chorus to allow others to join in with or another vocal line. Try to add underlying bass lines or simple chants to run under the verses or choruses. Layered vocals make an excellent effect.