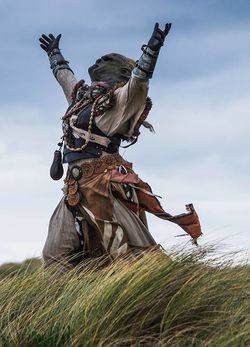 Shaman have a powerful connection to their ancestors.

Most orcs only experience communion with the ancestors when battle is upon them but a few individuals - called shamans - are able to hear the voices more frequently.

Shamans are almost incessantly surrounded by the constant input of ancestral advice much of it bearing a contradictory or even hostile message. As such, all shamans have a tendency to appear removed from reality, and powerful shaman often appear to outsiders to be mad. The madness expresses itself differently in every case. Some struggle to separate the voices of the ancestors from those of living orcs around them; some are withdrawn and sullen, some prone to violent outbursts, some spew forth incoherent snatches of sentences with no apparent provocation, while others have trouble focusing on the present. Some claim to be able to converse with the ancestors, holding conversations with them as they speak aloud to the winds. These shamans tap the wisdom of the ancestors but they are regarded with a mixture of awe and pity by other orcs.

It is not unknown for the shamans to call the legion together, and recite tales of great battles, or conjure stories of future victories which could happen. Heavy drumbeats and ceremonial pit fights are used to stir the blood of the legion, to help make them receptive to the voices of their ancestors. If successful these ceremonies open the ears of the orcs to the words of the ancestors, allowing them to guide the thoughts of the legion and stand shoulder to shoulder with their living sons and daughters.

Shamans have an important political role in Imperial Orc society as leaders will usually consult them to hear the words of the ancestors before deciding on important matters.

Shamans are commonly magicians, apothecaries or occasionally artisans, but no particular skills or abilities are required. While any character can be a shaman, it is rare for shamans to be warriors. If you are interested in a character who combines combat skills with a religious role, you might enjoy playing a pit fighter. As mentioned in that section a shaman and pit fighter makes a good two-person combination, with the two character types complementing each other and allowing for fun ancestor-themed interactions.

Shaman make good ritual magicians. Orc ritual magic often focuses around contacting ancestors, a role that is well suited to shamanic roleplaying. In addition the fetishes favoured by orc ritual magicians can be a useful way to let other orcs know you are a shaman.

A shaman is almost never a warlord, it is better to create a shaman character if you enjoy roleplaying a character that is able to go anywhere and speak to anyone but are comfortable with your words being ignored. Shamans are inherently mystical characters, they are a good choice if you like playing characters that are mysterious, quixotic or otherworldly.

You should assume that you will always be deciding for yourself what words or advice the ancestors have given you - it will be extremely rare for a referee to stop and tell you what an ancestor is saying. For this reason it is a good idea to spend some time thinking about one or more ancestors whose voices your character commonly hears. Some of these may be Imperial Orcs, a former friend or a notable relative who has now died, but at least one should be a barbarian ancestor or an ancestor from the time when the orcs were slaves. It is a good idea to name these ancestors and spend some time thinking about the sort of advice they commonly give; this will make it easier to be spontaneous about passing on their words of advice to others.

Many shamans find the constant communion with the ancestors to be disorientating and confusing. It is entirely up to you how affected your character is by this. A degree of madness will help make your character have some impact as a shaman, as they underline the fact that your character is fundamentally different to other orcs. But a character that is completely mad all the time is unlikely to be fun to play or fun for other characters to interact with. Our advice is to enjoy periodic bouts of madness that come and go, when they will be most dramatic and most fun to roleplay.

Shamans can be very influential in Imperial Orc society, as they are a conduit for the wisdom and strength of the ancestors. Generals, warlords and other important orcs are encouraged to consult with the shamans regularly so that you can pass on the advice of the ancestors. Since you will be making up this advice, and everyone knows you will be making up this advice, it is much better to try and be relatively impartial and proffer advice and words of guidance that contribute to the drama of the moment. Advice that is obviously self-serving is liable to undermine your credibility as a shaman, other characters will be justified in questioning whether you are really hearing the words of the ancestors or simply making something up that suits your own ambitions - such crimes are rare but not unknown.

Don't worry if other characters ignore your advice. The ancestors you are hearing may not understand the Imperial Ors so other orcs have carte blanche to ignore your words if they feel they won't help. If you want to play a character that gives orders and has them followed, then you would be better trying to play a warlord than a shaman.

However don't feel you have to wait to be asked for the words of the ancestors. You can hear the words of the ancestors whenever you want - so feel free to pass on the things they say to others whenever you feel like it. Shamans are meant to be quirky and unpredictable, they are not entirely of this world, offering unsolicited advice can be part of what gives the shaman their unworldly air.

There is never any purpose in asking a referee what the ancestors say - that is left for you to decide. It will be exceptionally rare for a ref to need to tell you something that an ancestor has said but if they do then they will come and find you and whisper it to you.