Making your mind up

Making your mind up

"I notice it isn't uncontested. Eleven hundred in favour, four hundred against."

"I'm not sure that's relevant?"

"Just mentioning. Not saying we should take it into account. Custard makes a pie better, as they say."

There was silence for a moment, then Abraham exploded.

"You have definitely just made that one up. There is no way that's a traditional Marcher proverb and even if it is, it's completely irrelevant to our current discussion!"

The Imperial Archivist snorted, and made a point of pouring dark yellow custard from the china jug onto his slice of hot fruit pie.

"You've caught me Abraham. I just made it up, but what I mean is that there's no harm bearing in mind that this isn't uncontroversial. Not everyone agrees that the orcs should be part of the Virtue assemblies. What do the rest of you think?"

"Eleven hundred is higher than four hundred, and it's a lesser majority." said Gerard. He shrugged expressively, and went back to totting up the numbers he was working on.

"There is always the veto," said Karkovitch slowly. "To be honest I'm not sure why you're discussing the statement of principle at all. We haven't been asked to comment on the judgement, only on the practical implications."

Leontes said something indistinct through a mouthful of apple, pastry, berries, and custard.

"We should consider the virtuous implications though... ?" said Abraham, making it a question rather than a statement.

Karkovitch shook his head, and Leontes laughed sending crumbs all over the table.

"No we shouldn't," he said firmly. "Karkovitch is bob on. The Synod can worry about that. No point keeping a cock and crowing yourself."

"So we're agreed then," said Karkovitch, taking charge of the discussion. "We present our findings, and then the Senate and the Synod will decide what they want to do about them?"

There was a chorus of nods, "aye"s and "yes"es around the table.

"Do you want me to write the guidance up?" asked Abraham. Leontes snorted.

"This is a wee bit delicate Abraham and I think we want as little commentary as possible," he said. "I'll do it."

"No. I agree that we want as little commentary as possible, so that's you out as well Leontes."

The Chief Magistrate and the Imperial Archivist locked gazes for a few moments, then Karkovitch's eyes slid to the right. Leontes followed, and he began to grin in a slightly unwholesome way. Abraham followed their eyes, and soon they were all three of them staring at the Auditor of the Imperial Treasury, lost in an oblivious happy daze as he worked through the treasury figures from the previous summit.

The Synod has already proven that orcs can exemplify a virtue with Skywise Rykana. It is contradictory and an affront to Loyalty and Pride as well as a limiter to Ambition that Imperial Orcs can preach and Exemplify a certain virtue but are not allowed to join a virtue assembly. The virtue assemblies should seek representation from every Nation in the Empire. 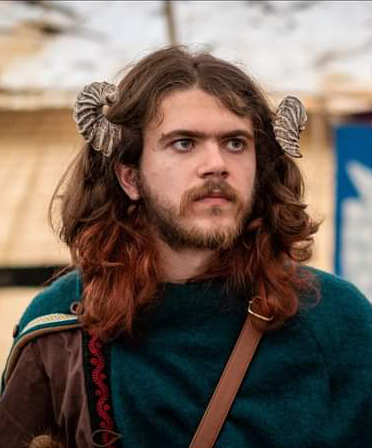 Goran Sokolov Zaytsev has addressed the paradox of orcs becoming exemplars while unable to be part of the very assemblies that recognised them.

During the Winter Solstice, Goran Sokolov Zaytsev raised a statement of principle in the General Assembly calling for orc priests of the Way to receive full recognition as members of the virtue assemblies. Currently, membership of a virtue assembly is determined by dedication - and orcs are unable to become dedicated. As a consequence this limits their participation in the virtue assemblies to the assembly of the Way. While the Varushkan storyteller's statement was not upheld with a greater majority, it has still attracted some attention. The Consitutional Court have been asked to comment on whether the makeup of the virtue assemblies could be altered, and how the Imperial Synod and the Imperial Senate might go about doing so.

Those who stand in the Synod shall express the views of their congregation. The Synod will establish assemblies that each may know their virtue and select the most virtuous amongst them to lead. Voting in the Synod will be performed by such assemblies as are rightfully able to weigh the virtue of an action or individual, in accord with their nationality and authority.

The Imperial Constitution does not mandate the makeup of the Virtue Assemblies. Indeed, there are some interpretations that argue that it does not necessarily mandate the existence of the Virtue assemblies at all. The procedures for determining who would be part of which Virtue Assembly were laid down at the formation of the Imperial Synod, in part as a way to allow the appointment of the eight Cardinals, but also to provide the virtuous with a strong voice in the religious affairs of the Empire outside of national bonds. All those dedicated to a specific virtue were grouped together, with those who chose to be undedicated lending their voice to the Assembly of the Way, which many intended to serve as a counterweight to the virtue assemblies (perhaps underestimating how popular the idea of dedicating to a single virtue would become).

Membership is determined by dedication, and before the Imperial Orcs joined the Empire, there was no need for a more complex method of determining membership. Because the Imperial Orcs could not become dedicated, it was taken as read that they would simply become members of the eighth Virtue assembly and at the time this was unquestioned. Goran Sokolov Zaytsev's statement points out how peculiar it appears that the Synod can declare an orc to be an exemplar of a virtue, while denying them a voice in the seven virtue assemblies.

When reviewing the situation, the first conclusion of the Constitutional Court is that it would not be appropriate to create a special exception from the rules of membership solely for orcs. Any change to the Synod must apply equally to all Imperial citizens. This means that if the Empire wishes to recognise orcs as members of the seven Virtuous assemblies, that same method of recognition must also be open to humans who participate in the Synod.

At the moment, the Civil Service monitors the size of every congregation in the Empire so they can determine how many votes and how much liao the priest who oversees that congregation will receive, in keeping with the Constitution ("The civil service will render to these priests such liao as is needed to minister to their congregation"). This already demonstrates the principle that the rules of the Synod apply to citizens regardless of whether they are human or orc - an orc preacher receives the same amount of liao as any Highborn priest, determined solely on how many citizens they support.

The Constitutional Court proposal is that in addition to examining the size of congregation, the civil service will also note which virtue (if any) that congregation favours. There is a certain amount of back-and-forth over this, with concerns from some branches of the civil service about whether they are the best people to judge the content of a sermon, or the actions of a priest and their followers. In the end the guidance is that the civil servants will simply ask the priest which virtue they favour, and thus which Virtue Assembly their votes should belong to, at the same time as they record the number of those votes.

Obviously, by Doctrine and law, there are only eight Virtue assemblies and only seven Virtues that it is acceptable to preach under the auspices of the Way. Each priest would thus have to select either a specific virtue they favoured, or acknowledge that they don't place one virtue higher than the others and belong to the Assembly of the Way.

In the view of the Constitutional Court, a change of this nature is not a Constitutional matter and does not require ratification. All that is being changed is how one becomes a member of a Virtue assembly - their fundamental role is not being changed in any way. As such all that is required is a Senate motion indicating that membership of the Virtue assemblies should be assessed by the civil service alongside the calculation of votes and liao.

Ever cautious, the Court also strongly suggests that the Imperial Synod consider raising a similarly worded statement of principle in the General Assembly to reassure the Senate that the Synod supports this change. If such a statement achieves a greater majority, it would be a clear indication of the assemblies' support. This step is considered valuable because the original statement - despite its greater majority - deals exclusively with orcs and as the Court indicates any change to the assemblies must be open to every citizen.

As a final "safety net" the Court also points out that the veto can be wielded by the General Assembly should they oppose a change to the way membership of a Virtue Assembly is determined.

There is no requirement that the Senate raise this motion during the coming summit - or at all. The option will remain available for the foreseeable future.

The Change in Play

If the Senate makes this change to the way membership of a Virtue assembly is determined, it will introduce a new option for players whose characters control a congregation resource. During downtime they will be able to select from a "preach" dropdown menu, which will set their membership of a Virtue assembly for the next event. This setting will initially default to the virtue the character is dedicated to (if any). If it is changed, that change will remain in place unless the option is changed again. The only options available will be the seven virtues and the Way, regardless of the character's dedication.

A character who is dedicated to a force other than one of the seven Virtues currently defaults to the Assembly of the Way. This will not change, but they will have the same option to declare themselves a member of a virtue assembly as any other character.

Assessment of qualification for the benefits of great works and the like will continue to be made at the end of Downtime.

The rules around appointments and elections remain the same following this change. If you have voted for a title such as cardinal that exists in multiple assemblies, you cannot vote for the equivalent title in your new assembly until a year has passed. The Constitutional Court has explicitly pointed out that this same restriction applies to similar titles that exist in multiple assemblies - the Virtue Inquisitor and Virtue Champion titles.

Eligibility for some Imperial titles is based on membership of a specific virtue assembly - for example you must be a member of the Assembly of Courage to be the Cardinal of Courage. That would continue to be the case, but the new rules for calculating who was a member of the assembly would apply if the Senate implement this change. That means that any citizen with a relevant title, such as Cardinal, would be removed from their position if they embraced a different Virtue in downtime.

The Imperial Senate voted to institute the change to how membership of a Virtue Assembly was determined, from dedication to the virtues preached by a priest between summits.