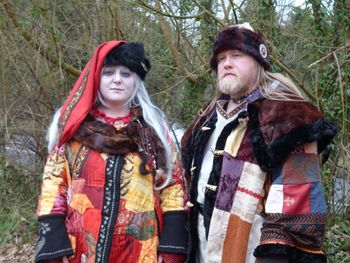 Priests in Varushka are considered to be (or seek to be) wise, and are generally either physically old or possessed of an “old spirit.” These wise ones are the repositories of wisdom in a community. While many consider themselves priests, and several are magicians, anyone can be a wise one simply by dint of offering good advice and keeping a close eye on moral concerns.

Elder wise ones are particularly respected, but there are wise ones of all ages. As a wise one grows older, they traditionally take on young apprentices who help them with their growing infirmity and in return are schooled in the ways of wisdom and virtue.

The most important role of the wise ones is to help people fend off the monsters of Varushka. Few wise ones fight the monsters directly; rather they teach people how to recognise them and protect themselves. They rally the whole vale when the monsters come, sharing with them the benefit of their experience and common sense. It is more important for a wise one to recognise and think their way around a problem than it is for them to memorize chunks of historical lore.

Wise ones recognise the danger of judging by appearances. There are plenty of stories where a wise child defeats a monster by refusing to trust the evidence of their eyes. Some wise ones emulate this by blinding themselves – not literally, but by blindfolding themselves when they are about official business. Forced to rely on other senses, they claim that they become adept at separating truth from lies – there is a common conceit that by blinding the eyes of the body, the eyes of the soul open wider allowing the wise one to see things as they truly are. A few wise ones never remove their blindfolds, living their entire lives in darkness and cultivating the “inner vision” that helps them hone their insight into the souls of others.

There is no official test to become a wise one – the title is an honorific either claimed or bestowed by one's peers. One becomes a wise one by being treated as a wise one and included in the counsels of the other wise ones.

Varushkans believe that most animals display one or more of the great Virtues. In particular they know that symbols or drawings of a creature can contain some of its power, so many Varushkans decorate their belongings with images of animals whose virtues they wish to emulate. The virtuous animals are also seen in Varushkan heraldry and art, as well as being worn as charms, belt buckles or embroidered patches.

Wisdom is usually symbolised by the spider or the squirrel. The goose and the spider (again) symbolise Vigilance. The bear and the boar symbolise Courage, and the virtue of Loyalty is associated with the hound. Deer and the eagle often symbolise the Imperial Virtue of Pride. Hares, foxes and other animals seen as cunning symbolise Ambition, and often encourage the hero of the tale to improve their lot or that of their family. Prosperity is symbolised by bees, whose honey has a special place in Varushkan society.

Varushkans use animal symbols and runes to express virtues in their storytelling and often as part of their costume.

Another common role for priests is as storytellers, following a tradition of telling instructional tales that show proper forms of behaviour and the repercussions of foolishness or vice. These stories balance optimism with harsh practicality; Varushkan religion instructs with a harder edge than some other national traditions. The custom of an older relative telling stories to the younger generation as the family gathers around the family is as old as humankind, but in Varushka it takes on additional significance.

Storytellers are often travellers, bringing spiritual support, entertainment and news of the outside world to isolated valleys, especially those without their own priests. The traditional garb of a storyteller is a brightly coloured coat of patchwork, marked with symbols and hung with trinkets, each one of which represents a story. Many storytellers use these trinkets and symbols as memory aids when telling their favourite stories. More so than other wise ones, a storyteller is likely to have a younger apprentice who learns the storytelling craft and the priestly ceremonies by travelling alongside the older priest.

...could not see the Wisdom in blindfolding oneself as some Varuskan wise ones do. So I tried it, and I will concede that I had to change the way I interacted with the world. The stories of the wise ones are steeped in virtue, and I feel they will come to accept the whole of The Way as readily as they do Wisdom. There is a matter I need to clarify, though. Is using animal symbols for the virtues a useful metaphor, or blasphemy against human virtue? I always believed it was the latter, but the practice is widespread and I cannot dissuade them against it.

Wayfarer Sarah in Epistles to the Winds of Virtue, 2 BE

A rich woman is wounded in her bed, surrounded by three girls that were, to her, as precious as any daughter. She had had no time for children of her own; these were her jewels, her honey, the unburst seeds planted in her garden, and, alas, it seemed she would not see them flower. Her stomach was twisted in a black knot; the skin was puckered and bruised where a great, terrible beast had pierced her gut, out in the forest. Tendrils of poison were spreading along her skin.

“My time has come,” she told the girls, who were stone-faced beside her. “Draw closer, so that I may tell you how to live in Prosperity such as I have.”

The girls did as they were bid. She clutched hold of a white blouse, her brow dripping with fever.

“In the forests about this vale, and in the mines beyond them; that is where you will find treasure greater than all the Empire has.” Her grip grew weaker, and the woman died.

The girls closed their eyes in respect, and did not cry.

The next day they met to arrange a funeral, but their minds quickly wandered to the dead woman’s talk of fortune.

“I think I will look for this treasure in the mines beyond this vale,” said Oksana, the oldest of the three girls.

“Well, I think I will search for it in the forest that surrounds us,” said Yuliya, the second oldest.

“And what of you, Zoia?” she asked the youngest of the three. “The forests and mines are so great for us alone to search - won’t you join one of us?”

“Why should I venture into those forests or those mines? Where my life is at stake?” asked Zoia at once, who had had quite enough of this talk. “That is what killed the old woman! That is where children are devoured and those who die are lucky! Those are the places of monsters, where life never ends, but tumults in a terrible dance with death, and you lose yourself or you work forever and beg for the Labyrinth, so the welts and sores on your toiling hands will finally stop weeping. I value my prosperity because I can live with it - indeed!”

Oksana and Yuliya looked to one another.

“But where will your fortune be if you do not work for it?” they asked.

“I work for it in my own way. I have a farm at home, and it is safe enough, because it is well known!”

They did not press the matter. Soon, Oksana had hired several men and women to accompany her to the mines, and Yuliya had found several strong schlacta who would help swing their axes in the forests.

Zoia laughed mirthlessly at the sight of it. See here, she thought to herself. They will spend all their money to work and not earn a ring of it back, not before they die, at least!

Oksana made her way along the red paths to the vale’s mines. It was as though she trod in heartsblood, as she descended deeper into the freezing pits, and her fingers stung as she swung her pickaxe, and all she saw was crackling darkness, and not a sliver of silver and gold.

Yuliya travelled along the snowy roads of the woods. She and the schlacta found their path was long and perilous, and before long she began to work at felling the trees in her way, that devoured the light above and obscured the forest floor, so that she could not search for riches or buried gems. She shivered from the sweat under her furs, and grit her teeth as her blisters tore.

So they continued, and they would return home at night with no chests of fortune. Instead, they began to ferry back the goods they had harvested. Oksana was burdened with the ores she had discovered, and she brought it home in barrels. Yuliya found she could not leave the fallen trees where they lay, and began to lug home her timber. They sold their excess, and continued to work.

Zoia, sitting at the door of her hearth, saw the women, bruised and wheezing as they were, and laughed outright. “No treasure at all,” she said, as Yuliya and Oksana stopped to hear what was so funny. “You are working tirelessly, and for nothing. My fortune is humble, but at least I have one.”

“Ah, nothing is free, Zoia!” they said. “So many are too afraid to venture forth - if we aren’t to work the forests and the mines for fear then they will sit there and be wasted!”

“Better you than I, and I will laugh as I live!”

But, in time, word began to spread of the rarity of Oksana’s metals, and the mighty strength of Yuliya’s hardwoods. They heard a sudden cry for their goods, and so they worked to acquire more, forgetting their search for the old woman’s fabled fortune, as their own began to grow by the hands of their labour, and their vale began to prosper as it never had. They were respected widely, and the vale thought on them as their wise women for all they had done.

Zoia, seeing their great riches mount up, found herself in a fit of jealousy. They had not died, and they were richer than she could ever imagine she would be on her farm. “Where did you find the treasure?” she demanded. “Where had the woman buried it?”

“Nowhere,” the women told her. “Our industry itself was the treasure, and Vigilance the very vein from which our Prosperity is drawn.”

They lived with their fortune for the rest of their lives.