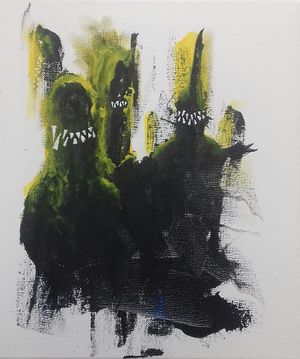 There are monsters in Varushka.

Varushka is dangerous, and the dangers come in many shapes. Some of these shapes are familiar to the other citizens of the Empire. Disenfranchised or lazy people take to banditry, using the isolation of the Varushkan wilderness to create hidden settlements, raiding their neighbours and travelling caravans to sustain themselves from year to year. They are reviled as parasites by civilised Varushkans, and those bands that survive more than a few years tend to fall under the sway of dark forces.

There are orcs here who take advantage of that same isolation. These orcs tend to be the remnants of larger tribes defeated by the Varushkans, and while they are a threat they are rarely any more pressing than any other disenfranchised bandit gang. As with the bandits, the Varushkan orcs tend to make pacts with the horrors that lurk under the trees, sometimes becoming their agents.

The mundane dangers of Varushka pale beside the supernatural threats. The weakest and most common of these are termed “Wolves” by the Varushkans. They are hungry, instinctual horrors that seek to feast on living flesh. Ghouls and husks are common examples of Wolves. They tend to appear in large groups and besiege a valley, or fall on travellers in large numbers, but they can usually be driven off by strength of arms or cleverness. The primary task of the boyars and schlacta is to keep the Wolves at bay.

Another example of a Wolf would be the dubik of the deep forests - animate plant-like creatures that thirst for human blood and inhabit certain isolated tangled woodlands. They have an ability to mimic human speech, and seek to draw unwary travellers off the road so they may feast. On occasion, they gather in sufficient numbers to try and overwhelm a vale, and if they are successful the buildings are claimed by the forest with supernatural speed. Despite superficial appearance, they are not related to the vallornspawn husks - rather the volhov claim they are connected to some slumbering vegetative sovereign that sleeps in the black earth of Volodmartz. This sovereign is somewhat confusingly referred to as the Dubik and said to have a particular hatred for those of the changeling lineage.

A more powerful threat are the “Sovereigns.” A far cry from the instinctual terrors, these creatures are powerful and wilful individuals. Corrupt boyars empowered by sinister bargains, meddling eternals and cunning conspirators such as the Volodny are all examples of Sovereigns. They are intelligent, patient and terrible. Sovereigns tend to be restricted to specific areas, and many of them labour under bindings or strictures that prevent them from preying on the Varushkans directly. While “Wolves” move freely, many Sovereigns tend to slumber in their lairs until external influences wakes them up. The actions of foolish bandits, thieves and roving orc bands are often blamed for awakening the more powerful Sovereigns, and many rules or restrictions in Varushka are designed to prevent people interfering with them and drawing their attention. Sovereigns sometimes work through agents who possess more freedom to operate outside their lairs. Wolves can rarely be reasoned with, but Sovereigns often present a civil mien and can be bargained with.

The Dubik has already been mentioned. Other famous sovereigns include the Howling Queen who is said to slumber beneath the Razors in north-eastern Miekarova; the hungry king believed to rest in a barrow under Broken Barrow in northern Karsk; and Agramant the Wendigo, an eternal whose fascination with cannibalism makes his heralds and agents a threat to some isolated vales especially in northern Miekarova.

Not every monstrous threat in Varushka fits easily into the wolf/sovereign category. Some creatures seem to fall part-way between the two - they are intelligent like sovereigns, but lack individual power or are motivated by appetites more appropriate to wolves.

Midway between the Wolves and the Sovereigns in power are the shapechangers, the most common of whom are the Mora – strange bird-like creatures who can assume pleasing shapes to go among humans or lure travellers to their deaths. The Mora can bypass many protections to visit human settlements, but by doing so they become tightly bound to the rules of hospitality and cannot directly act against gracious hosts.

Similar to mora, Rusalka are shapechangers but their natural form appears to be that of a water- or sea-dwelling beast rather than a bird. Rusalka are very rare, even by Varushkan standards, but most common in the Semmerlak and the frozen lakes of the far north. They dwell in certain bodies of water, seeking to lure travellers to a watery doom. In addition to their natural shape, they can assume the form of a human or orc - often a beautiful youth or an aged figure in need of assistance. They can also take on a form that appears as a nightmarish humanoid with aquatic features, razor-sharp teeth, wide eyes, and grasping claws. Those who let the Rusalka touch them are often rendered helpless by their touch - paralysed by the strength-sapping charm of the creatures.

Some Wintermark travellers claim that similar creatures dwell in the northern oceans - which they call Hylje - but they consider them helpful, positive spirits. By contrast, some Marchers claim more predatory creatures akin to shark shapeshifters dwell in the Gullet, and creep about vessels at anchor to devour the sailors aboard. There are also circumstantial reports that the Thule orcs know of similar beasts.

Another creature that occupies a nebulous middle ground between Wolf and Sovereign is the supernatural predator called the Plaguewulf. They are usually classified as Wolves, although the Elder Plaguewulf especially is closer in power to a Sovereign. The Sovereign named the Howling Queen, who is said to slumber in north-eastern Miekarova, is said to be the progenitor of these horrors, each of which is capable of threatening a small or undefended vale with their flesh-hungry minions.