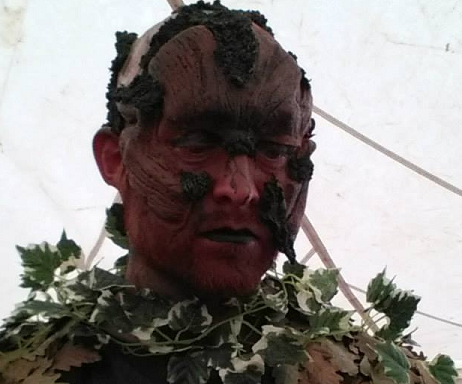 Husks are found throughout the areas infested with the Vallorn; unlike certain other vallornspawn they are rarely encountered outside the immediate area of a vallorn dominated region. They resemble humanoid bodies infested with plant material; there is a great deal of diversity among 'husks. Some have vines or creepers growing from their orifices, others are covered in patches of moss; some have been reported with thorns growing through the skin while others are adorned with flowers. The only consistency is that the creature looks like a several-days-old-corpse infested with living plant matter.

A vallornspawn husk is formed when a humanoid is incapacitated (rendered terminal or killed) in an area filled with vallorn miasma. While most 'husks are formed from human or orc bodies, a rare few are composed of the bodies of ogres. The miasma quickly infests the body and maintains (or in some cases, restores) the natural processes that make life possible. Over a period of time ranging from a few hours to several days, living plants spread through the flesh and eventually the new vallornspawn husk lurches to its feet. Corpses that have been dead for more than a few minutes do not seem to become prey to the miasma in this way. Rather, the miasma causes them to rapidly putrefy and decay, often causing non-animate foliage to sprout from their remains. Likewise, a body that is very badly damaged (dismembered or decapitated) is not suitable to become a 'husk. Removing the body from the miasma may also prevent it from being reanimated in this way.

The plant infests the flesh and maintains life, preserving it long after a dead body would have rotted and fallen apart. Indeed, it seems that a vallornspawn husk can endure indefinitely as long as it is exposed to the vallorn miasma and avoids violence. Given the incredible healing abilities common to all vallornspawn, a husk that is damaged or injured but not destroyed will rapidly be restored to full health. Some stories claim that the ritual Turns the Circle was developed in part specifically to ensure no usable bodies were left behind for a vallorn to use - and as a more acceptable and less time-consuming method than chopping a fallen comrade limb from limb and scattering their remains.

Students of the vallorn say that a 'husk does not appear to be a self-aware creature like a human or orc. While they may moan, wail, howl or even occasionally produce comprehensible words they appear to do so without any awareness of language or communication even with each other. Unlike the humans and orcs they once were, they seem to operate on a small number of instinctual responses.

A 'husk left to its own devices is a reasonably passive creature, moving slowly around the environment and spending long periods stationary in sunlight or near water. When a living human or orc comes nearby, however, the husk becomes a relentless predator. It moves quickly to attack the intruder, pursuing the target if it if flees. The 'husk often voices an echoing wail or howl when engaging, which rapidly attracts other husks. A husk in "offensive" mode receives a burst of vitality, and can maintain a frenzied attack for as long as it takes to neutralise all interlopers in its environment. Once a target is incapacitated, a vallornspawn husk tends to ignore it, leaving it to be infested with miasma and create a new vallornspawn husk.

'Husks are physically strong and are very resilient to damage. They attack with weapons that range from rusted and pitted swords to heavy tree branches. They heal rapidly - warriors have observed 'husks quickly restoring themselves from near-death to full strength in a few moments during which they sway hypnotically and give off a dreadful wailing moan as the corrupt vitality that infuses them repairs or in some places replaces damaged flesh.

'Husks appear to suffer no discomfort from the Vallorn miasma that infests the areas where they are usually encountered. Paradoxically however they are extremely vulnerable to magical venom (as well as substances such as Oil of Blackthorn). A 'husk that is exposed to powerful venom of this nature rapidly falls apart. The rituals Fetid Breath of Teeming Plague and The Grave's Treacherous Edge can clear a small area of vallornspawn husks almost immediately and have proved occasionally useful in punching through a ring of the creatures, often allowing those trapped within the vital moments needed to make an escape.

Over the years, a number of priests have performed the insight ceremony on vallornspawn husks. The results have been contradictory and confusing. Most often the result is other (indicating that the husk is not a human, orc, creature of the realms, or ghost). Sometimes the ceremony indicates that the vallornspawn husk is human or orc as appropriate to their physical form. No clear explanation has been revealed as to why the ceremony gives different results. One theory is that it depends on whether the body that create the husk was technically still alive when the transformation took place, or had passed away. 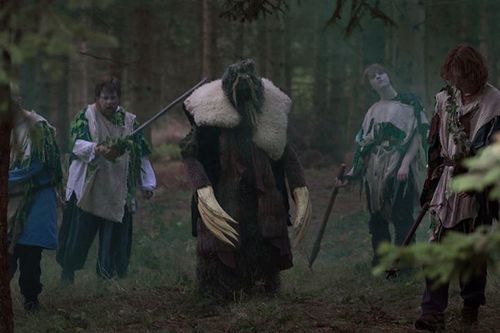 Vallornspawn husks and what appears to be an old vallornspawn briar or a small hulk.

Experiments have shown that the vallornspawn husks are not "undead" by any standard definition. The ritual Hold Back Frozen Hunger is ineffective against them; rather, like other vallornspawn, they can be held at bay by Ward of the Black Waste and similar specific protections.

When a human with a strong briar lineage is infested with Vallorn miasma, the result is sometimes a more potent creature. Scholars theorise that the strong influence of the Spring realm that causes a briar to manifest its lineage makes the resulting body a good match for the vallorn infestation. Vallornspawn briar husks possess powerful healing abilities that they use to repair and restore fallen 'husks. They seem to possess a heightened awareness of other 'husks, and unlike their fellows they often hang back, rather than running straight into the fray. In close combat however, they are still dangerous opponents able to cripple and incapacitate lightly armoured opponents with ease. It is interesting to note that a vallornspawn husk created from a briar continues to grow bark throughout its existence. As these briar husks age they become almost entirely covered in bark.

Ogres are not common, which makes vallornspawn hulks rarer still. A Vallornspawn hulk is a massive creature full of unnatural vitality and, due to its size, does not share the fatal vulnerability to venom that marks its smaller kin. A hulk still reacts to the touch of venom - such attacks mark the creature in much the same way fire or vitriol might mark a living tree - but they are not incapacitated by them.

A sickness particularly common among the Navarr is believed to be related to the vallornspawn husks. Long-term exposure to vallorn miasma can cause the illness to develop - it is characterised by a creeping malaise, difficulty breathing and coughing fits. While it is relatively easy to treat with an infusion of bladeroot, if it is allowed to progress for too long it can cause permanent lung damage and even death. There is a superstitious belief that someone who dies of green lung will become infested as a Vallornspawn husk, and so the body is often destroyed - but there is no practical evidence to support this belief.

While green lung is most common in those exposed directly to the Vallorn miasma, it is also found in people who live close to a vallorn tainted area - there is speculation that the wind may expose those outside a tainted area to sufficient miasma to bring on symptoms of the illness. It is not otherwise contagious. While a wet cloth is of little use against the miasma itself, there is some evidence that a wet cloth over the nose and mouth will reduce the likelihood of contracting this sickness, at least in the short term - this counter is of little use to those who are exposed for extended periods.

The easiest way to deal with vallornspawn husks is to stay out of the areas where they are found. Vallornspawn husks are for the most part a passive danger to those who explore vallorn tainted areas. They can be avoided, and rarely venture outside of the miasma. Once engaged, however, they are relentless opponents.

They are not intelligent however, and all things being equal a competent well-armoured warrior could deal with one or two husks without too much difficulty.Unfortunately, they are usually encountered in large numbers, and fought within the vallorn miasma, two factors which make them much more dangerous. The more husks there are in a group, the more likely they will be able to take a few moments to restore themselves to full health, making it much more difficult to destroy them. Worse, the presence of the vallorn miasma means any warrior who is badly hurt is at great risk of dying and in turn swelling 'husk numbers unless special precautions such as an Abraxus Stone or an enchantment such as Vitality of Rushing Water have been employed. A wave of 'husks easily pushes forward over a downed warrior, leaving them unreachable by healers who might otherwise save them in the short time before the miasma overwhelms them entirely.

Vallornspawn husks are never allies of humans or orcs. Any background that includes non-violent interactions with them is unlikely to be approved. Within the restrictions noted above, they may make good opponents for a player event set in or around one of the Navarr forests.