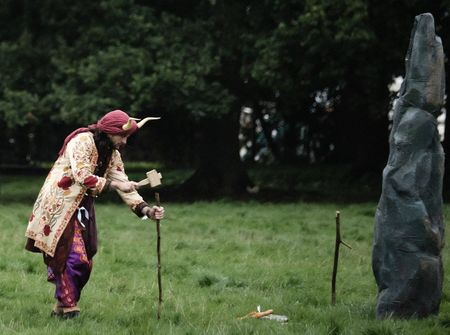 The area must be carefully prepared before a ward can be raised.

Performing this ritual takes at least 2 minutes of roleplaying. The area to be enchanted with this ward must be clearly apparent to those within, and without, its bounds.

This ritual targets a building or well defined, walled area. It must be performed inside that location.

When used inside a building, the ward protects the entire structure. Any openings in the structure - doors and windows especially - must be clearly marked with runes or symbols of warding. The building must be a reasonably permanent structure, preferably of wood or stone; the ritual will not work on a tent or other entirely similar structure.

For purposes of this ritual, a walled area must be composed of solid posts, preferably wooden. Posts should be placed at least three pace, and at most five paces, apart and protrude out of the ground at least three feet. The posts should be clearly visible, and ideally clearly marked as 'special' - carved or painted with runes for example.

As with anything you might be taking onto a battlefield, or that is likely to have people fighting around or near it, the phys-reps should be as safe as possible (no sharpened points, for example). Please do not tie rope between the posts; if it is not clear where the boundary is, you will need to use more posts.

The ward can be taken down by moving, removing or defacing the warding signs, but undead cannot do so themselves. Assuming it is not interfered with, the ward stays in place until the duration expires.

If undisturbed, the ward remains until the next sunrise.

This is a powerful ritual that keeps undead or unliving creatures such as husks, wights, wraiths, restless spirits at bay or weakens them if they enter the warded area. Husks and other weak undead will usually hesitate before entering the area; the more powerful the undead creature is, the more it has to lose and the less likely it is to enter the ward if it has any choice. There are stories that suggest that the ward has had some success at keeping some other unnatural creatures at bay; specifically those that are unliving, rather than undead - volodny and the grim warriors of the legion of the eternal Kaela are both said to be weakened by this ward, as are some sovereigns. Not many experiments have been done - in the words of the itinerant volhov Pakaanan "The time to experiment with this kind of thing is when there is an angry sovereign in your village, slaughtering your warriors; if you try to find out earlier, there's a good chance that your experiments will end with an angry sovereign in your village, slaughtering your warriors."

In parts of Varushka, and with some places near the Highborn Necropolis it is common practice to have warding runes carved or painted above the doors and windows of a house, or on fence posts set up to surround a shrine, church, hall or similar structure. Then, should undead enemies threaten, those unable to fight flee to the safe location, which is then warded through the reasonably quick ritual. The alternative - to create the ward afresh each morning - would quickly deplete the mana reserves of an entire coven without useful effect, and leave everyone vulnerable should undead creatures attack.

The most common runes to use with this ritual are the Wintermark runes Yoorn and Kyrop and the common tower symbol associated with Vigilance. In Varushka these wards are often supplemented with staring humanoid faces or the heads of geese, while in Wintermark bird-heads are common on the top of any warding poles. In The Marches the warding symbols often include stylised figures of guardians, or straw poppets- sometimes with small daggers, needles or shields bound to their limbs. Highborn ritualists usually ensure there is a bell to hand, and bells are rung throughout the warding ritual itself - not least because they serve to warn the community that there is danger.

When performing the ritual, the ritualists often walk the boundaries of the warded area, invoking protection. They often burn incense, or scatter ashes, and check that all the warding symbols are intact. Some ritualists place bowls of fresh- or salt-water at each entry point. Fire is often used as well, especially when the ritual is performed at night.