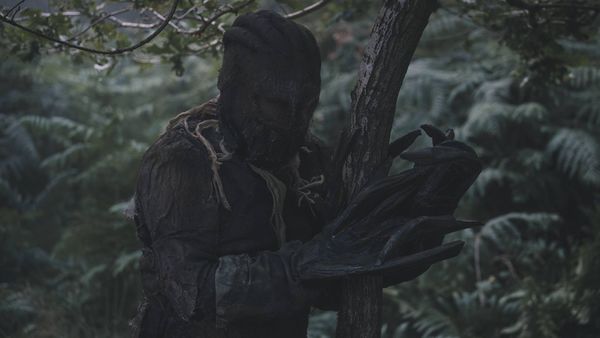 A vallorn seems to be a malignant hostile magical ecosystem.

The Vallorn... nothing less than the vile offspring spewed out from the mating of a Great White Shark and a rampant fungal infection.

The vallorn appeared as part of the disaster that overthrew the cities of a nation named as 'Terunael' in Navarr legends, which may have covered much of the land which is now Empire. From the hearts of those cities, abundant greenery spread, a sick, infectious wave of life that cracked and crumbled stone, shot great trees up through streets and buildings, and warped, twisted and destroyed most of the inhabitants of those cities, scattering the others to the wind.

As the refugees attempted to claim back their lands, they discovered that around the core of each city, areas of superabundant, warped life had appeared, resistant to all efforts to destroy them. These were named vallorn.

A vallorn seems to be a malignant hostile magical ecosystem -- an area deep in the heart of a forest where even the Navarr fear to tread. Inside them are monstrous plants, the spores of which mutate living creatures that are exposed over many months. Even the air is different within the vallorn, weakening those who enter as if they were breathing mild poison.

There is no clear guiding intelligence behind the vallorn - they are not believed to be self-aware. However, they will strike back if damaged or hurt, much as a beehive or ant's nest will use its footsoldiers to drive off the invader. It is believed that there is one vallorn around each of the fallen cities of Terunael. Sometimes, however, vallornspawn and even vallorn plants show up in locations with no clear connection to Terunael; there is no clear explanation for how this happens.

We welcomed the night; in the darkness we could not bear witness to the vallorn’s appetite. By day… by day all Its wants, Its passions, Its yearnings were laid out in their visceral horrors. Synod forgive me for I know the Law cannot; but when darling Arturo came back to me – mud in his veins and thorns in his mouth – and he gestured me to embrace him… I ran, and I ran, and I ran.

Cai, Thorn of the Conclave, after the reconquest of Miaren prior to his execution for desertion

As far as it is known, the vallorn have not spread far after the initial rush of growth in the fall of the ancient cities. This is at least in part due to the watchfulness of the folk of the steadings, who take great pains to ensure vallorn areas are not disturbed and the vallorn roused. The forests of the vallorn are sick with life, greenery regenerating so fast that axe or fire only serves to enrage them. Attempts to cull these areas have been made time and time again, using both magical and mundane means, and have always met with failure.

No complete catalogue has ever been made of the strange monstrosities within the vallorn's domain - some appear simply to be diseased, misshapen forest creatures, or mutated humans and orcs. Some seem to be plants, sporting a mass of tangled thorns or possessing abilities that make them dangerous to travellers. A common threat to those who venture into those areas where the vallorn is strong are the vallornspawn husks. Some threats extend beyond the infested forests, however; from time to time, the monstrous insect horrors that prosper in the miasma swarm out of the woods and voraciously destroy crops and communities that lie in their path.

The Navarr have long believed that the Empire is still weak, and any attacks on the vallorn would be disastrous. So they build their strength, and the strength of Empire, and learn what they can of the foe. 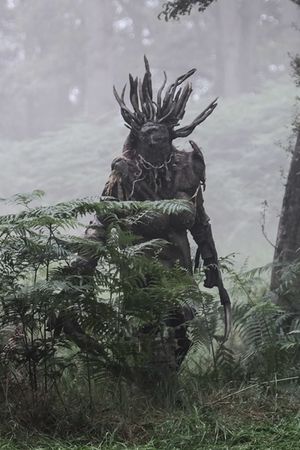 The miasma is often visible in the air, often as a green mist.

The deeper one travels into an area claimed by the vallorn, the more likely one is to encounter the "vallorn miasma." It is as if the air itself is infected with dangerous toxins or spores, or perhaps an aura given off by the slumbering vallorn itself. The miasma seeps into the lungs and through the skin. It is sometimes visible in the air as tendrils of mist, often tinged green or yellow. It is impossible to avoid the miasma, and while some travellers claim that exposure can be avoided by tying wet cloth over the mouth there is little evidence that this tactic actually works.

Humans and orcs exposed to the miasma rapidly develop symptoms of nausea or mild feverishness. A critically injured individual is quickly - and fatally - overwhelmed by the miasma. Explorers in an area of miasma are advised to employ precautions such as the Vitality of Rushing Water ritual, or the use of an Abraxus Stone; to ensure they are accompanied by competent healers and well-prepared physicks; and to avoid violent confrontation wherever possible ... although this latter rarely proves practical. Even if they have avoided being injured, explorers who spend any period of time in an area of vallorn miasma will need medical attention when they return to remove its lingering effects - rituals such as Ascetic Star of Atun are ideal for this purpose. Extended periods of time exposed to the miasma - even in its most dilute form - is also known to cause the sickness known by the Navarr as green lung. While a wet cloth is of little use against the miasma itself, there is some evidence that a wet cloth over the nose and mouth will reduce the likelihood of contracting this sickness, at least in the short term.

The strength of the miasma can only be permanently reduced in an area by reducing the power of the vallorn that spawns it. Miasma powerful enough to harm a mortal may be found in small "pools" outside the immediate area of vallorn infestation, especially if there are vallornspawn plants in the area. It is much more common to find it across large expanses of vallorn claimed regions like a toxic sea (OOC Note: regions with the Vallorn keyword are likely to be heavily invested with vallorn miasma.) Exotic, alien and unique plants prosper in areas thick with miasma, and the monstrous insects associated with the vallorn thrive in these areas.

The miasma itself is not restricted to areas of vallorn infestation. Like a cloud of smoke, strong winds can blow the miasma into nearby areas. Without the support of an active vallorn, however, the miasma dissipates quite quickly. For the hours or (rarely) days it remains, however, it supports the presence of vallornspawn husks or ettercaps in unexpected areas.