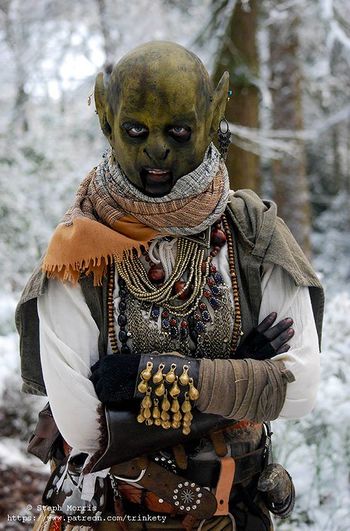 These protective amulets help their wearer to fight off the effects of venom.

The most common form for an Abraxus Stone is a silver or gold band set with a white oval stone, usually inscribed with a crimson or emerald Cavul rune. They are also crafted in the form of amulets, medallions and bracelets, but regardless of the form are usually composed of silver metal.

The use of these protective amulets dates back to the time of ancient Terunael, when they were often given as gifts to foreign visitors. In the aftermath of that kingdom's fall, many of these rings were made to help the early Navarri fight against the Vallorn creatures. The rarest of these rings were bands of pure ilium set with pale gemstones and inscribed with runes; any one of these artefacts would be a gift beyond price to the Navarri.

In the wake of the disaster that destroyed the Terunael civilisation, the rings were discovered to have an additional vital power. They provided protection from the deleterious effects of exposure to the so-called vallorn miasma, up to and including preventing a dying person being infested with the plants that might cause it to rise as a vallornspawn husk. Indeed, the rings even appear to be effective at protecting their wearers from the effects of the sickness known as green lung that is linked to long-term exposure to the miasma - provided they are worn constantly of course. Even a few minutes without the protection of the talisman may result in the sickness being contracted.

Not all Abraxus Stones are rings. One of the first rings made by the Navarri was used as the basis for a beautiful amulet, given as a gift of friendship to the first of the Highborn navigators, Atuman: a single perfect white stone hung from an ilium chain, delicately crafted to suggest links of interlocking Imperial Roseweald flowers. As part of the negotiations surrounding the giving of this Tear of Peace, the Highborn agreed to allow the Navarri to travel through their lands. It disappeared following the assassination of Permion the Lawmaker, and while some stories suggest the First Empress wore the chain around her neck, as with the other rings its whereabouts today are unknown.

These rings are obviously of special use to warriors who must fight magicians, assassins, eastern orcs or vallorn-beasts.

One of these items is, of course, the central device in the famous Marcher play, "Twelve Pigs". The Stone is inadvertently mixed in with the feed for a herd of swine on their way to market, and the penniless protagonist must scour the countryside trying to find the pig which has eaten it in order to secure his fortune. Despite the fact that the hero has to spend a good deal of time on hands and knees combing through pig-faeces, the play was originally regarded as a parable on Prosperity, and many in the Marches were outraged to discover that the League playhouses were playing it as a farce.

During Autumn 382YE, the Advisor on the Vallorn Sian Eternal commissioned research into the Abraxus stones with a focus on the item’s origins and uses of significant stones. The researcher - Luca Friedlin von Holberg - was unable to establish anything new about the origins of the stones apart from to confirm that they were most likely first used by the Terunael. Their primary use was apparently as a gift to foreign delegates. Whilst they were being hosted in one of the cities of the Terun, the amulet's properties served as a symbolic demonstration of the city's intent to protect their guests.

Luca was able to discover information about several historical examples of the Abraxus Stone.

The Gambit of the Wulfhunter belonged to the warden, Mischa Koschinov Sennariv. In 112YE, according to the stories, Mischa spent a significant period hunting a certain powerful elder plaguewulf that had been attacking vales across Dupadealuri and Srodkoja. The stories claim that in addition to the plaguewulf itself possessing pestilential breath, the husks it created spread that same pestilence in some fashion leading to veritable plague of shambling horrors in southern Miekarova. The warden hounded the creature relentlessly until it had led them back to it's hidden lair. Upon arriving at the creature's den Mischa spent several hours killing each husk that came at them, ensuring that when the time came the plaguewulf would have no reinforcements to call upon. This done Mischa then invited their quarry out into the open. Trapped with nowhere else to go, the beast emerged. The tale ends with the plaguewulf breathing out its pestilent breath on the warden who, with a smirk, drank a simple healing potion - of which the warden had several at their belt - and charged the monster.

Mischa was victorious, and ascribed their success to the possession of a powerful treasure recovered from a barrow somewhere in northern Krevsaty. The stone was apparently passed down from warden to warden, but its current whereabouts are unknown.

This stone apparently originates in the Sarcophan Delves. Called the Halssnoer des Omstrengelend Vergif, it apparently has much the same design as one would expect from an Imperial Abraxus Stone. It takes the form of a bracelet of a silver metal which has been studded throughout with pale opals and engraved with the owner's family name. According to the researcher, the amulet may have used different components to those involved in making an Imperial Abraxus Stone. The Sarcophan merchant who was attempting to sell the item was allegedly very closed-lipped about the exact provenance of the item; it is not clear if its existence is an example of two separate nations inventing the same magic amulet or if the artisans of the Delves derived the schema for their own stones from the Empire in some fashion.

The Vate's Shelter was worn by the Navarri vate Roswen Doublestep during a purge of the vallorn that took place in Liathaven in the reign of Empress Brannan. It is said to be a fine silver band that shone brightly under moonlight, allowing Roswen to be seen easily by her allies during her many night time skirmishes. The stone was apparently handed down from vate to vate since the first days after the destruction of Terunael - although it is not clear if the amulet was an actual artefact or simply a treasured relic that was repeatedly reforged.

Being the leader of a potent coven, Roswen would often volunteer to bear the enchantment of Fetid Breath of Teeming Plague despite its unfortunate potential side effects. During engagements with vallornspawn, Roswen would apparently rush into the miasma with a dozen doses of the mageblood philtre. Through her use of the talisman she was able to get deep into the miasma, behind a large portion of vallornspawn husks, before unleashing the torrent of Spring magic. Roswen and her coven were unfortunately lost during the Summer 225YE, and her body was never recovered. At least, as the bearer of an Abraxus Stone, it is unlikely Roswen will have been transformed into a vallornspawn husk - although the same sadly cannot be said for her coven.

The Swan's Chalice belonged to an Urizen Sentinel, Nikettas of the Spire of the Green Shallows, who served briefly in the Citadel Guard during the reign of Emperor Hugh. Nikettas fought against the Druj for almost his entire adult life. The Swan's Chalice was apparently a gift from the eternal Ylenrith, allegedly earned at least in part by Nikettas' involvement in the rescue of the Archmage of Day, Gemma Steward. Nikettas fell in battle in Holberg in 365YE and the talisman was never recovered. According to reasonably reliable reports, the amulet was "renewed" in some fashion each Spring by a herald of Ylenrith who sought out Nikettas at Anvil. It is not clear if the herald is still renewing the talisman, wherever it may have ended up.

Abraxus, the mad "prophet"
The research explored a potential connection between the magical jewellery and the "prophet" Abraxus Whitespire, but came to the conclusion that the controversial merrow almost certainly took the name Abraxus from the talisman - valuable as it would prove to be to those experimenting with potentially poisonous combinations of herbs and philtes - rather than having any profound connection to the Terunael artisans with whom the stone originated. Luca theorises that the records of a Xavier Whitespire who submitted multiple statements of principle which are in keeping with the future teachings of Abraxus may actually prove to the be original Abraxus. There are no records of judgements from Xavier later than 45YE, and the first known publication of Abraxus was the infamour On the Teleology of Pure Liao in 47YE.
Retrieved from "https://www.profounddecisions.co.uk/mediawiki-public/index.php?title=Abraxus_Stone&oldid=77950"