Performing this ritual takes at least 2 minutes of roleplaying. This ritual targets a character, who must be present throughout. The target character must have the artisan skill.

The target, who must possess the artisan skill, can craft a single item overnight. They must know how to make the item, and must have all the required materials.

After making the item, the artisan experiences a roleplaying effect: they are tired and drained, exhausted by a night of supernaturally enhanced work; this condition persists for at least an hour unless removed in some fashion.

The target is assumed to have access to any tools they might realistically need when they are targeted with this spell - a forge, a spinning wheel, a workbench or whatever. The item is crafted between time-out on the night the ritual is cast, and time-in the next day. You cannot perform this ritual on the final day of an event.

Using this ritual it is possible to restore the magic to an existing magic item whose powers have expired - a practice often referred to in-character as "reforging" even for items such as robes or wands. You must meet all other criteria, and give the depleted ribbon to the referee along with the other materials. You can only restore the magical property that the item already possessed - you cannot use Timeless Hammer Rhythm to make a Biting Blade into a Bravo's Blade for example. Restoring the magic of a depleted item does not provide any sort of reduction in the cost of the ritual, or reduce the materials needed, and the target must be able to make the item as normal. You cannot use this option with an item that has not expired.

This option exists to allow characters to maintain the continuity of a special item such as an heirloom or an item of worth. Another advantage is that the history of the item will be continuous for the purposes of effects such as Skein of Years. Performing a reforging "resets" the information gained through Hand of the Maker.

It is possible to turn a standard magic item into an artefact in the same way, as long as sufficient ilium is available. 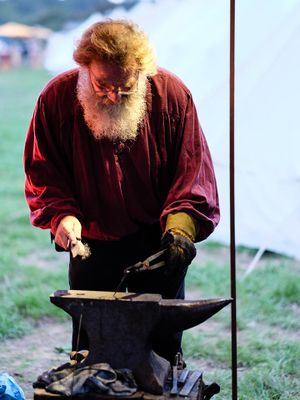 It can take weeks of patient work to complete a crafted item.
But not with the Timeless Hammer Rhythm.

This powerful ritual allows an artisan to employ their skill with supernatural speed, making an enchanted item in a tiny fraction of the time it would normally take. Artisans who have worked under the influence of the ritual have reported that time seems to stretch endlessly ahead of them, and that no matter how much physical effort it takes them to work their craft, they never become tired. They speak of working in a fugue-like state, unaware of the world around them and utterly fixated on their crafting task. They do not eat or drink, nor feel hungry nor thirsty, and are almost impossible to distract from their work. Some speak of having assistants in their work, although they are never quite able to remember what form these assistants took; nor has any observer seen any sign of them.

The next morning, all save the most energetic of targets report being absolutely exhausted. For several hours after sunrise, they feel enervated and weary, not only in body but also in mind. Some magicians connect the effect of this ritual with the eternal Estavus, the forgemistress, who is said to be able to perform similar feats on an even greater scale. Others point to stories in which tailors, cobblers or carpenters perform miraculous tasks in impossibly short time and suggest that the ability to create items overnight is more about focusing on human endeavour through Autumn magic than drawing on supernatural entities.

This ritual involves crafting and artisan, and it is common to target the tools of the crafter as well as the character with the artisan skill. Often runes such as Aesh, Hirmok or Verys are used to (respectively) give clarity of thought and mastery of skill, and to give physical endurance to the crafter. It is common for the crafter to be given an enchanted brew of some sort. Invocations of heroic crafters or Paragons and Exemplars who are artisans, such as Isenbrad are common.