Philtres of the High Peaks

Philtres of the High Peaks 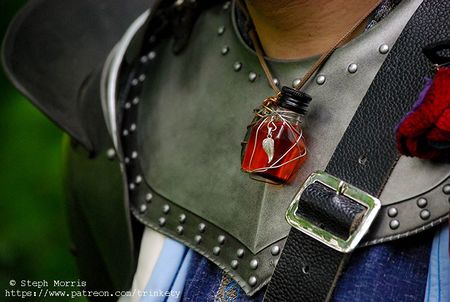 The Mageblood potion can make the difference between life or death for a magician on the battlefield,
restoring their reserves of personal power enough to perform a few last, vital incantations.

It should come as little surprise that the philtres of the high peaks were first codified by the Urizen, but the original recipes themselves date back to the time of Terunael. The Urizen refined and developed them over the course of several centuries, improving their potency and efficiency, and by the time they joined the Empire the preparations were in the form they exist today.

This thick red liquid visibly contains finely-chopped particulate and has a slightly salty taste; all factors that contribute to its common name. The fact that the philtre has proved to be most popular with magicians who focus on healing spells has only helped to reinforce this naming convention, to the point where the original Urizen name - The Philtre of Celestial Excellence has fallen out of use except among the most traditionally minded.

The Philtre of Heavenly Lore

This startling violet elixir is likened in Urizen poetry to the sky at night. Some metaphorically minded apothecaries - especially in the Brass Coast and the League - include tiny shavings of pure gold, silver or platinum as part of their brewing process to enhance this stellar connection. Doing so achieves little more than raising the price of the resulting mixture, however.

Tisane of the Stuttering Fool

This pale green, mildly narcotic liquid is sometimes called Thresher's Tea. It depletes the personal mana reserves of a magician who drinks it,leaving them unable to cast spells. It can sometimes be given to a magician unawares, but is more often fed to them directly as part of a punishment - it is common to give this herbal tea to a criminal who might possess dangerous magical powers.

The Elixir of Empyrean Art

This silvery elixir is effervescent, and may sparkle occasionally when exposed to natural light. It is quite rare and much sought after. The apothecary dissolves a small amount of the star metal ilium in a potent herbal solvent that is then stabilized with Cerulean Mazzarine. The greater the store of personal mana possessed by the magician who drinks it, the more powerful the effect.

The first elixir of Empyrean art was given as gift by Callidius of Wealdawn in an attempt to secure the affections of Tybalt of Magvillius. Their slow, fifteen year courtship during which the pair exchanged clever gifts at each equinox and solstice is still a subject for the restrained romantic poetry of the Urizen. At the wedding, Callidius made a gift of the secret of preparing this potion to each of the assembled guests, an act of Wisdom and Prosperity that, after his death, lead to calls for him to be recognised as an Exemplar.

Some circumstantial evidence exists to suggest this elixir is addictive. The ingredients themselves have no such properties, but the well-read physick Noach von Holberg suggested that the desire to drink more elixir came from the magician, not the potion itself. To date, few magicians have been rich enough to afford enough draughts of the elixir for this craving - if it exists - to become a problem.