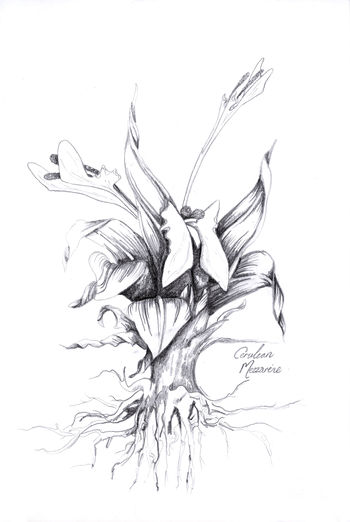 The deep blue flowers of this delicate plant resemble butterflies. So perfect are the blooms that they trick other butterflies into alighting on them and thus help to pollinate the plant. It has thick, fleshy leaves that produce a numbing sap with analgesic properties.

Crushed and mixed, the sap from the stems and the leaves allow a physician to restore use to a ruined limb, swiftly knitting shattered bone, mangled flesh, and torn muscles. It also proves useful in treating illnesses or injuries to the structure of the body - the bones, skin, ligaments, and muscles. It is also very much in demand by apothecaries - several popular potions require doses of cerulean mazzarine.

It favours warm, dry environments and is most common in the wild around the Bay of Catazar, growing equally well in the orchards of the Brass Coast, on the lower slopes of Urizen, and in the gardens of Sarvos. It grows poorly in Wintermark, Varushka, Skarsind, and Hercynia. Outside the Empire it grows well in the northern Principalities of Jarm, and on the shores of the Asavean Archipelago, and (if rumour is to be believed) on the Broken Shore under the dominion of the Grendel, and in the Iron Confederacy.

Excessive use of cerulean mazzarine can cause problems - there are reports of reduced mobility, temporary paralysis, and even cases where patients inflicted injuries on themselves by accident as a consequence of the pain-reducing qualities of the herb. There are some reports of mazzarine being used as a slow poison, but once identified the cumulative effects are treated easily by a spell or a physician with access to marrowort.

An apothecary with access to an Escharotic Cauldron can substitute two doses of cerulean mazzarine for a single dose of marrowort when preparing a potion.