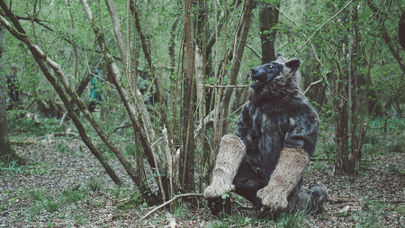 A plaguewulf is a supernatural predator found in parts of Varushka. They are greatly feared, and their appearance is a cause for great alarm in Varushkan settlements. Technically they are Wolves, but as with the Mora they more practically occupy a middle-ground between Wolf and Sovereign.

They are intelligent, and seem in some way to feast on the death of living creatures - while their subject husks devour the meat of the dead, the plaguewulf is said to sustains itself on the 'last breath' of a dying creature. While they can feed on the terrified deaths of animals, they much prefer to drink the life-breath of humans and orcs. They do not need to physically suck the breath from a victim (although they are seen doing so on occasion); rather than seem to be able to suck the essence out of the air itself.

Plaguewulfs are doubly dangerous because they are never encountered alone; they are always surrounded by the flesh-hungry husks their sickening powers have created as servants and soldiers.

While they are predominantly encountered in Varushka, there are some unreliable stories suggesting similar creatures might exist in other parts of the world. There are tales from the deserts of Xira of a similar sounding creature whose breath desiccates living flesh; they are said to feast on the fluids of the body in the same way the plaguewulf feasts on the breath. There are also stories from the distant Sumaah Republic of jaguar-like beasts that eat the skin of the living. It is not clear whether these creatures (if they exist) are related to the plaguewulf or, as is more likely, are entirely different supernatural predators unrelated to the plaguewulf.

These hulking beasts are furred humanoids with the features of predatory animals. Most commonly they have wolf-like muzzles and features, although versions with rat-like or bear-like details have occasionally been seen. As intelligent predators, they sometimes use weapons, armour or other tools, and there is at least one story of a plaguewulf that wielded an enchanted scythe which it used to cut down its opponents before devouring their life. Plaguewulfs are larger than human-sized opponents, which makes them even more tricky to face in combat.

A Plaguewulf is almost never encountered alone; rather they are surrounded by a pack of shambling, flesh-hungry husks that appear to be largely under their control. The plaguewulf creates more husks through the use of its horrible pestilential breath - a living being caught in the exhalations of a plaguewulf is envenomed and the flame of their life is snuffed out by any serious illness. Still worse, shortly after their death the victim rises up as an abominable horror that preys on the living. Some scholars suggest that the effects of Virus Lunarae are modelled on or somehow derived from the effect of plaguewulf breath. Plaguewulfs are said to be able to use their baleful spittle to create subject husks from freshly dead bodies (even if the bodies have been buried for a few days), but this is much more time consuming.

No husk, even one from created by a ritual such as Quickening Cold Meat will attack a plaguewulf, and they seem to have the ability to exert dominance over many such creatures giving them their less-common sobriquet of Wulfkings.

In addition to their venomous exhalation, the plaguewulf is known to possess great reserves of healing energy which it sometimes shares with its husk minions. When physically challenged, it can strike mighty blows with its claws that rend limbs or send human opponents sprawling.

An area where a plaguewulf has laired for an extended period of time tends to acquire an aura of sickness, lethargy and creeping despair. This makes facing the creatures in their den's doubly difficult. In rare cases where the den has also been a regio this aura of despair has been even more powerful.

Plaguewulfs cannot abide the touch of fresh, pure water especially running water such as that found in rivers and large streams. The fresher and purer the water, and the faster it flows, the more they hate it. This expresses itself most clearly in a reluctance to cross or approach large bodies of water such as lakes or rivers - attempts to drive a plaguewulf off with buckets of water have proved tragically unsuccessful.

Conversely, they are often attracted to areas of polluted or poisoned water, especially if that water is stagnant. There is a story of a plaguewulf that entered the sewers under Temeschwar in 218YE and wreaked havoc there until a combined force of Temeschwari bravos and wardens tracked the creature to its lair and destroyed it.

It is important to note that the husks created by a plaguewulf are not impeded by water in any way.

These supernatural predators have no culture or customs as such. They are intelligent and can speak, but they are solitary monsters who rarely if ever meet up with others of their kind.

There are dark tales of individuals who have made pacts with plaguewulfs; one story tells of a bandit who worked with a plaguewulf to lure travellers into ambushes. Once the plaguewulf had feasted, the bandit looted the corpses. Another story tells of a vale who helped a plaguewulf attack and devour the life of residents of nearby villages in return for safety from the beast's rampages. In almost all such stories. the human who deals with a plaguewulf comes to a horrible end, either at the hands of the people it has betrayed or the jaws of the plaguewulf - these monsters are incapable of gratitude.

Some histories mention plaguewulfs as having fought alongside the armies of Alderei the Fair, and the Volodny are known to bargain with these hideous creatures.

All plaguewulfs are said to share a common ancestor, a Sovereign usually referred to as The Howling Queen. She is believed to slumber beneath The Razors in north-eastern Miekarova.

A Plaguewulf is capable of starting a serious infestation of husks, and often directs its forces to attack isolated settlements. The true horror of the plaguewulf is that once it starts killing humans, its forces become larger and able to attack better defended settlements. A plaguewulf and its forces are more than a match for a group of human soldiers, and defeating one would require the effort of a band of well-equipped and well-prepared heroes.

Plaguewulf venom can be purged by any effect that removes the venom condition, but it is important to note that once the target has been envenomed it does not matter how or when they die - if they die while under the effect of this venom, they will rise as a flesh-hungry husk within a few moments. Attempts by some creative wardens to 'pre-poison' themselves have been tragically ineffective - once exposed to the venom, it must be removed with an effect such as purify or an unspeakable second existence is inevitable.

It is worth noting that plaguewulfs, while supernatural, are living creatures and not undead.

A very few encounters with plaguewulfs have been with creatures significantly more potent than the average beast (although the creatures are already rare enough that the word 'average' has little real meaning when speaking about them). These horrors are said to possess additional supernatural powers, each unique and terrible. Three encounters are recorded in the stories of Varushka, and told and retold with significant variations: