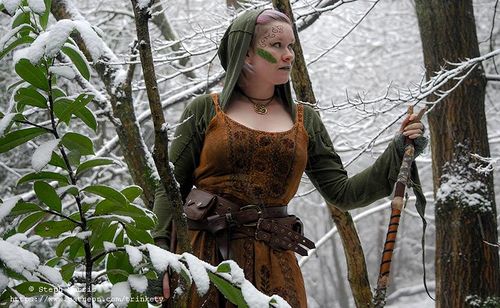 Magic is dangerous, and selfish magic doubly so.

When the cities of Navarr were consumed by the vallorn, much of the Navarr magical lore was preserved by distributing it between the Steadings and Stridings. Most still have a few ancient tomes from this time, either the originals meticulously cared for, or copies that have been painstakingly written out. By themselves these books do not offer sufficient knowledge for a young Navarr to learn what is required, but they are enough that those children who become fascinated with magic can begin to learn. To ensure that they can retain a mastery of magic through the generations, the Navarr periodically trade books whenever they meet.

As a result of this approach, magic is seen as the legacy of the nation as a whole, rather than any individual Striding or Steading. Those who devote themselves to the study of magic are expected to acknowledge the gift they have been given and to seek out ways to employ their magic in the service of the Navarr. Not all choose to do this of course; there are selfish individuals in the Navarr as in any nation, but those that do are called Vates.

Vates are expected to make themselves known to all. Like Brands and Thorns, they usually mark their oath with a brand or tattoo. Because of the similarities with the oaths that Brands and Thorns swear, Vates who enjoy battle often become Thorns and the wisest amongst them sometimes become Brands. The work of a Vate is difficult; they are expected to use their magic carefully but to ensure that the spells they cast serve their community without charge. In return many Navarr try to ensure that they give what support they can spare to the Vates. 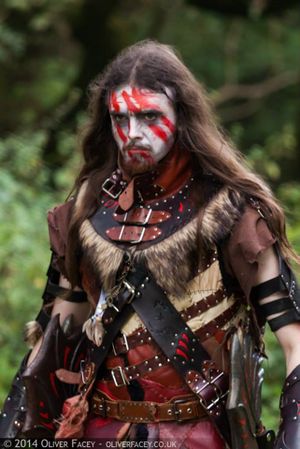 For the Navarr, magic is in the blood.

Guides make a habit of knowing who the Vates are, so that they can bring individuals to them who need magical help, and the Vates are often called on by the Senators to perform rituals that benefit territories, the Navarr nation or the Empire as a whole. This life of service to the Nation can be arduous and difficult, but most Vates shoulder it willingly. Their reward is the acknowledgement and respect they receive from other Navarr and the opportunity to practise their magic often.

Vates are the only Navarr who are trusted to meet with the eternals or their heralds. There is a belief that the oaths of the Vate help them resist the influence of the other Realms, and that they will use their influence with the eternals only in support of the nation and the Empire. Other magicians - including those of other nations - who have regular contact with the eternals are often viewed with a little suspicion, especially if they are not prepared to talk about their experiences.

For the Navarr, magic is in the blood. The Vates use blood-letting to draw on their power, to focus their rituals and incantations. The practice preserves the memory of the sacrifice made by Navarr and Thorn, the first Vates, who gave their life to protect the people from the threat of the vallorn. Blood is a common motif in Navarr rituals.

The Vates only ever use their own blood and the blood of willing participants when performing magic. Blood drawn from an unwilling or dead victim is useless to Navarr magic; it holds no power. Because of their use of blood-letting, it is rare to find a Vate who does not have some ability with the healing arts, either mastery of the powers of Spring or else chirurgery. Many Vates are skilled with both, able to use magic and skill alike to heal wounds and knit bones.

The creation and tracing of complex designs to create magical resonance is well known and long practised by the Navarr. At its most basic, it is found in the concept of map-making - of creating designs that mirror the world - and in journeys along paths and roads. A complex design represents a journey, but it can also represents the idea of permanence. Following a path, repeating the actions of someone who has gone before, gives extra weight to the journey and if that journey already has a magical meaning, the repeated tread of many feet recreates and reinforces that magic.

The trods are the most obvious example of the use of patterns - tracing out a great complex design, which is then reinforced over and over not only by the Navarr stridings but by every other pair of feet that walks on or near the path. It is important to note that the trods are neither arbitrary, nor human-made. The paths are formed when the ritual, The Dance of Navarr and Thorn is performed in a territory creating an intricate pattern that serves a vital magical purpose. The vates who perform the Dance do not define how they are laid out; rather they say that the ritual draws out a fundamental pattern created by landmarks and the flows of magic making it visible to the Navarr who travel the trods.

The marks that accompany the swearing of oaths are often abstract designs. Some Navarr ceremonies include retracing the designs to encourage participants to relive the moment when the oath was first made, strengthening both the oath and the participant in the process. Some Navarr guides believe the Great Dance is the ultimate expression of this, which each life a person takes they trace a pattern through the world as they circle round and again.

Navarr magicians often incorporate repeating patterns into their rituals, especially those that create enchantments. Drawing a similar pattern on the hand or face of each participant in a ritual, or creating a pattern to represent a territory or the magic that will be brought to bear. Sometimes these are scratched into the ground, but there are many different ways to make a large pattern during a ritual - pouring out a trail of water, for example, or having every ritualist moving along a simple path around and between the others and the rituals targets.

The patterns employed in Navarr magic are usually curving, swirling and looping, folding back in upon each other with few straight lines or corners. Scholars note that this tendency is very much at odds with the angular patterns found on many Terunael ruins and artefacts. There is a great deal of speculation as to why this may be the case, but so far no conclusive explanation has been reached.